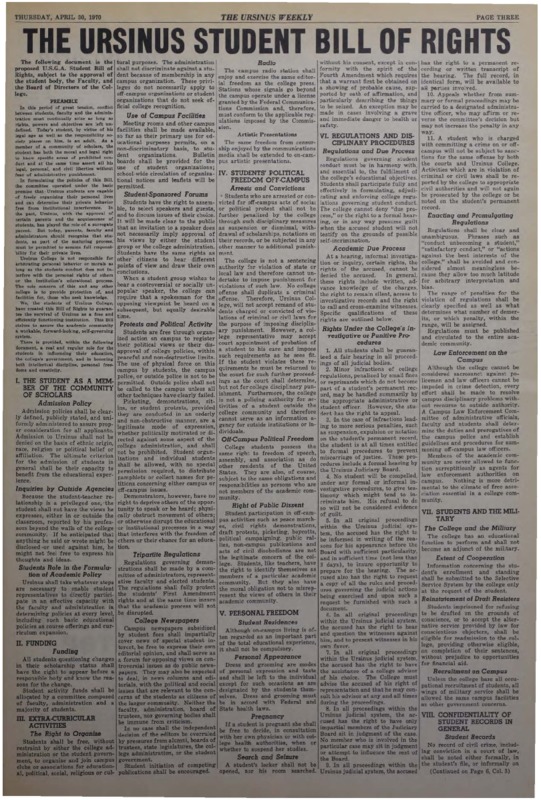 In a strong move from the students, the U.S.G.A got together and proposed a student Bill of Rights for everyone at Ursinus. The Bill of Rights cover a lot of material. Under this bill, student rights would range from having the freedom to dress how they chose and avoid on-campus punishment if they were arrested off of campus. While a lot of what is suggested in this proposed Bill of Rights sounds obvious to us reading it now, it is important to remember that this was written and proposed in a time where Ursinus had very different traditions and rules than it has today.

The center of this bill is filled with how student political freedoms should be handled. To simplify it down to one word, it would have to be "freedom". When the bill talks about a student’s political freedoms, they leave it so open where it could realistically mean anything as long as it did not break any local, state, or federal laws. While I find it admirable and I am sure there is a strong arguement there that could use the First Amendment, it does seem like a lot. To no surprise, this bill faced some significant push back from the administration.

When was all said and done however, the students scored a victory? While there were some major amendments made to their proposed bill, the U.S.G.A and the Administration were able to come to a compromise.

In a rather critical piece, editor Alan Gold looks at the student movements as a whole and Ursinus's history with political activism and comes to the conclusion that since they (both Ursinus students and college students more broadly) have not won any significant victories, that the best course of action is to step back, get a level head, and work with the system in place.

He draws a connection between student support of politicians and those politicians "frustrations" at the ballot box. Which I cannot support or deny. That is something I have done no research on.

He also discusses Ursinus and how the student body has faced unequivocal defeats and cites the Bill of Rights as one of them. I find this to be an intriguing choice for an example. Sure, the bill did not go through in the form the students initially intended it to but at the end of the day a compromised bill was passed. That surely has to mean something.

In the Ursinus's strongest display of activism in this period, a two full-fledged protest demonstrations rocked our small campus early in October of 1970. Despite being encouraged by the actions of other students across the country, the students stayed true to previous trends of activism on campus and protested very local and Ursinus specific issues. The demonstrations broke out after mounting tensions regarding the segregated dorm rules, enforcement of social rules, and policy statements from school President-designate Pettit. Also, I feel this is worth noting that the term "segregated" in this context is referring to the dorms being segregated by sex, not race.

These protests also served to only divide the campus further. Obviously people were already divided over the reasons for the protest but now, afterwards, the protests continued to drive a wedge between students and the administration. The Dean, Dr. Richard Bozorth, described the protests by saying, "It was not only noisy, but some of the shouting was obscene, and traffic was blocked... The demonstration was not calculated to seem like a reasonable appeal to logic on the part of the demonstrators."

A series of letters were also sent in to the editor and published in the Weekly. Many of the letters were strongly against the protests calling them "sickening," "selfish," and "injurious."

So Ursinus had finally rallied around a cause and gained enough support to stage a protest and are immediately met with harsh criticism from all sides. This is an unfortunate end result because when you look back over all of this, you can almost for a narrative of Ursinus's initial steps towards political activism. It begins with a quiet and conservative campus until Herb Smith begins to shake things up a little bit and then over the course of a few years, things build and build and build until it culminates in full blown protests. After this, things seem to go full circle and Ursinus and the Weekly go back to being relatively quiet.