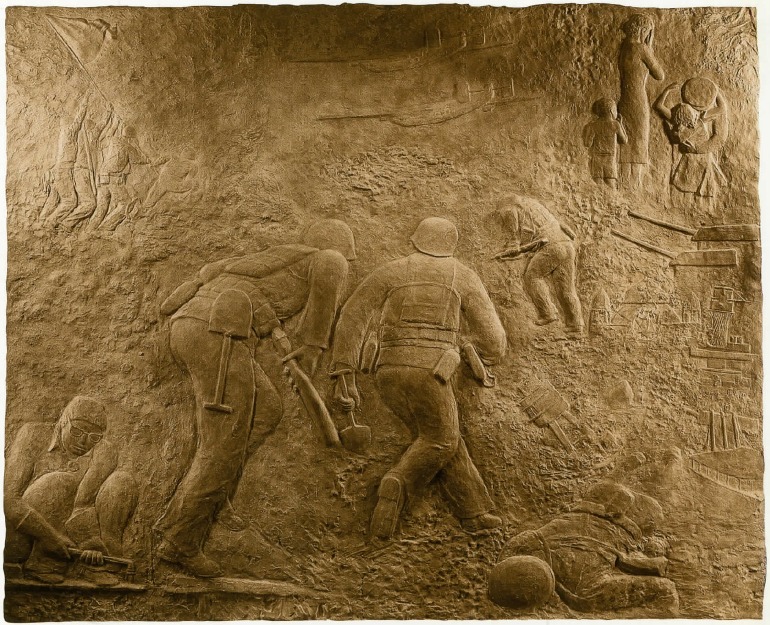 Section of "Promise/Antham" memorial relief located in Wismer Campus Center which includes a depitiction of the attack on Pearl Harbor.

On December 7th, 1941 the Japanese attacked a United States naval base located at Pearl Harbor, Hawaii. In the wake of a devistating attack which left the U.S navy in the Pacific crippled, Americans mourned the loss but were ready to stand up and take action. These actions and other responses would take different forms depending on where individuals where coming from. For the student body of Ursinus College, the following years would be unique both within the nation but also in the history of the college. Some would leave the school early to support the war effort, others would come in: some seeking a civilian education and others in search of training to become naval officers. Regardless of which path students found themselves on, it is clear that December day changed the trajectory of their lives.

As Evan Snyder, a student at the college on December 7, 1941, later recalled:

"On Monday President Roosevelt delivered his well-remembered "This day shall live in infamy" speech and suddenly our nation was at war, not only with Japan but Germany too. Of course we thought it would all be over in a few months - but it wasn't. Slowly the realization came that our fleet had been dealt a severely crippling blow at Pearl Harbor and the road back to peacetime would be long and painful." (Snyder 13).