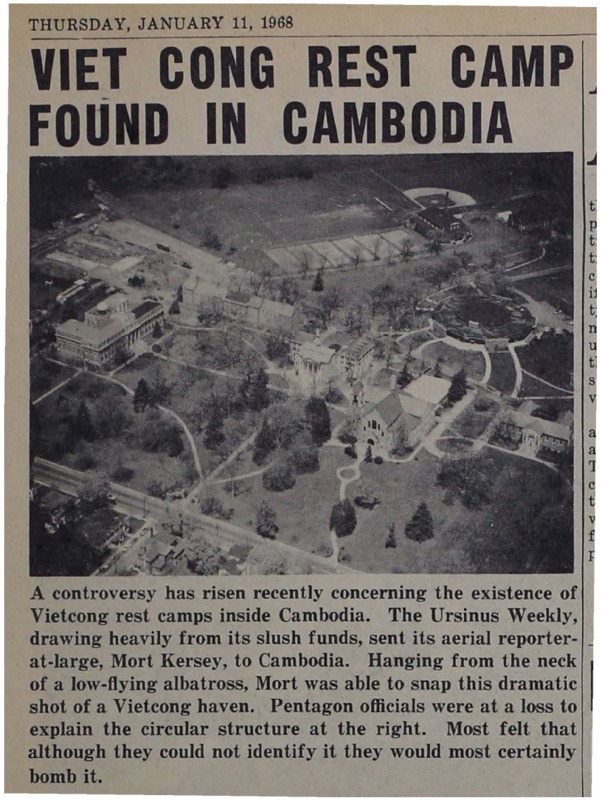 With every good joke there is some amount of truth.  Political and social satire can be traced back to even the ancient Greeks with playwrights such as Aristophanes. Ursinus College is not exempt from this tradition either. In a short piece describing an aerial photo of the campus as a Viet Cong camp and saying that despite how "they [the Pentagon] could not identify it they would most certainly bomb it." Despite being a short piece, looking back on it we can see some of the thoughts and feelings students must have been having about the war. The part that truly stands out to me is the ending which I already quoted. As public support in the U.S turned against the war, one of the key issues raised was the amount of civilian casualties in Vietnam. This piece plays on those feelings and on what could have been seen as an incompetent and uninformed chain of command in the military. 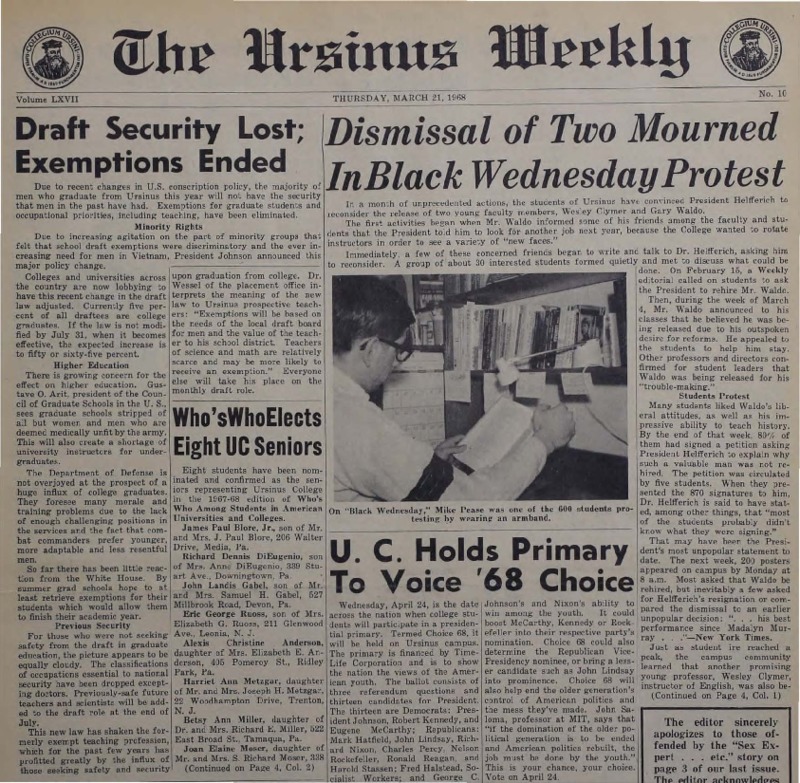 At the end of Herb Smith's time as editor of the Weekly, a controversy struck campus hard enough to urge a normally complacent student body into action. President Hellferich chose to let go of two student favorite teachers because they had not received their PhD's and it seemed like that process would take them a little while. During their interviews, both Dr. Doughty and Dr. Smith informed me of this and how they and the rest of the students only found out afterwards. At the time, the administration was withholding the reason as to why the two teachers were being let go.

While the letting go of two teachers is not connected to anything relating to the Vietnam War, this still fits cleanly into the scope of this project because along with the war going on in Vietnam, the era was marked by widespread campus protests and demonstrations. Most notably the Free Speech Movement at Berkley. Getting Ursinus to become part of that legacy is no small feat. While the cause is not very wide reaching, it mattered to those on campus and it brought them to action. That certainly counts for something.

Published a few months after Herb Smith's more optimistic view of Ursinus, a man name Fred Jacob publishes a piece saying that Ursinus will not and cannot change. He argues that despite the passion so many students felt during the firing of Professor Waldo and Clymer, nothing changed. They were still let go. Despite everything that had happened, Ursinus had not actually changed in any visible way.

Because we sit here today and look back on everything that has been written in the Weekly, it makes it impossible for us to truly and accurately judge any one thing to be truth over another. That being said, I'd like to propose a hypothesis for what was going on at Ursinus at this point in time. I want to start by saying I disagree with Fred Jacob's dreary lookout at Ursinus's future. Yes, while very little physically changed on campus, I would argue that '67-'68 school year infused the student body with a sense of confidence that they had not had before. As we move forward through the Weeklies, we will see examples of student demonstrations on campus and I believe that without these events, student responses to issues later on would be different. While there was no decisive victories for the students in the '67-'68 school year, it served as a time for the student body to flex its muscle and begin testing how they can throw their weight around.