An article announcing Congress's declaration of war on Japan.

On December 7, 1941, life changed for all Americans. No longer were we a bystander in the war raging across the globe. We had been thrust into it due to a direct attack on our naval fleet by the Japanese at Pearl Harbor. A day later, Congress heard President Roosevelt speak and quickly passed a resolution to officially declare war on Japan. Now that the United States was an official actor within the war, different attitudes and feelings washed over the American people. After the initial anger and mourning for those lost at Pearl Harbor, there was an overwhelming inclination that everyone should become part of the war effort and do everything in their power to support their country and help win this war. Ursinus was not exempt from these feelings and the lengths at which both the student body and administration to accomplish these goals was nothing less than astonishing.

Through formations of new student organizations, the community coming together around specific events, and the college taking risks by adopting new programs, Ursinus showed that while it may be a small liberal arts school secluded north of Philadelphia, it will show the same pride and dedication in helping move the war effort forward as anywhere else. 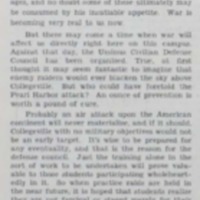 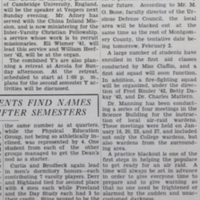 An article reporting on how the new blackout system has been installed and will be tested the next night. 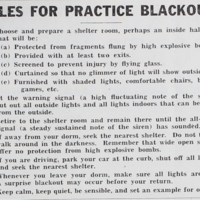 Rules published in the Weekly about what to do in the event of an air raid.

Less than a month after the attack on Pearl Harbor, students on campus organized the Ursinus Civilian Defense Council so as to prepare the college for the possibility of foreign invasion. The article titled Civilian Defense At Ursinus wants students to be informed and prepared in the event of any enemy invasion. While the author notes that an enemy invasion of the United States seems unlikely and even then, Collegeville would not be an early target, he warns, "An ounce of prevention is worth a pound of cure" (D.A.H, Civilian Defense at Ursinus).

Following that same idea, an emphasis was also placed on learning basic first aid skills. The call to action used by students on campus was, "Take first aid training and help the total defense effort!" (D.A.H, Suppose a Life Depended On You).

The Ursinus Civilian Defense Council was an active group on campus and organzied a campus wide blackout system which included tests and rules students were encouraged to learn. When looking back, it is easy to think these students are going to extreme lengths for to combat a nonexistant threat. In reality, the attack on Pearl Harbor and the subsequent declaration of war had thrust these students into a whole new world filled with unknown dangers and they just wanted to enforce campus safety.

All three of the above articles were published in 1942, less than a year after Pearl Harbor and the inclusion of the United States in World War II. Nationwide there was a feeling of fear as to what could happen in the future. Ursinus's campus was not excluded from this feeling. Despite that fear however, there was an overwhelming attitude of "Do your part". Everyone wanted to be a part of the war effort and the national defense. 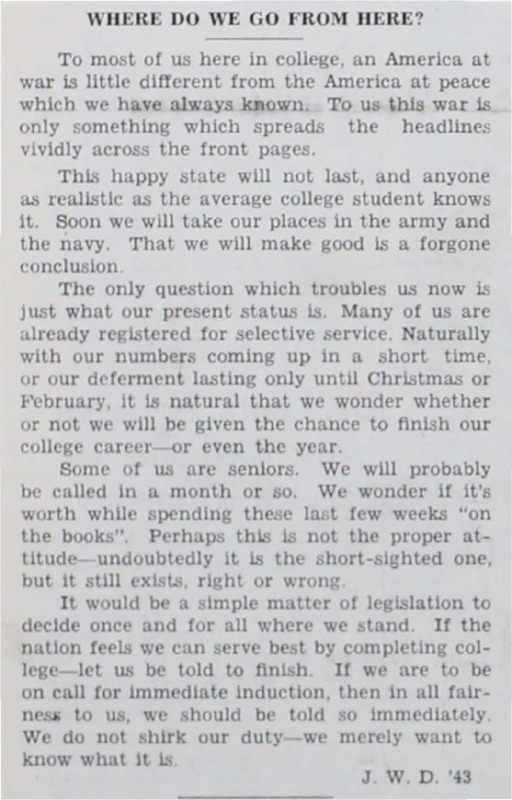 A student article pondering what his duty is.

For many students however, there was not a clear direction in which they felt would be the best for the country. Students knew they wanted to help the war effort but many did not know how. One article found in the Weekly is a student pondering that exact question. The author questions what course of action would better serve the country, him completing college or him being called into the military, "If the nation feels we can serve best by completeing college - let us be told to finish. If we are to be on call for immediate induction, then in all fairness to us, we should be told so immediately." (J.W.D. Where Do We Go From Here?). 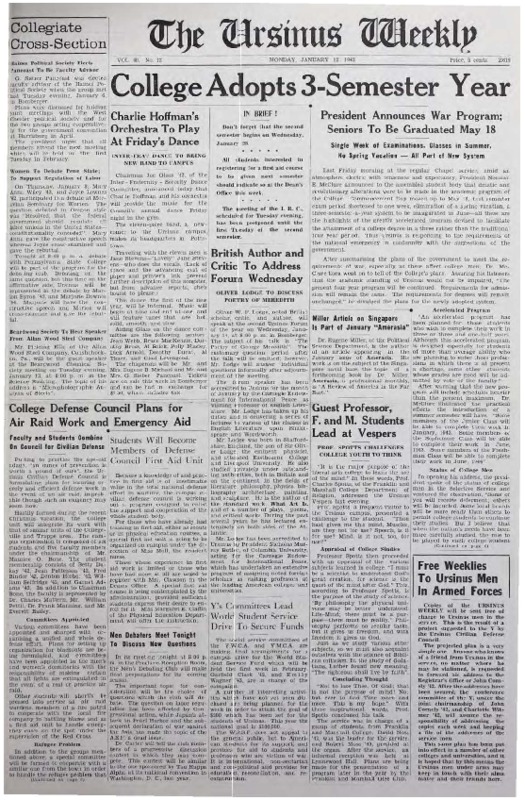 An article on the adoption of a three semester school year to allow for faster graduation of students.

Just over a month after the attack on Pearl Harbor Ursinus implemented a plan to speed up graduation while maintaining its educational standards. This was an infrastructural change made by the administration to allow students a way to graduate sooner and thereby get more people out into the workforce sooner. This decision was in response to the shrinking workforce as more and more workers were being sent to the front lines. With the goal of helping fill the gap, this accelerated program was not meant for the faint of heart, "Although this accelerated program is designed especially for students of more than average ability who are planning to enter those professions in which there is at present a shortage, some other students whose grades are good will be admitted by vote of the faculty." (College Adopts 3-Semester Year). 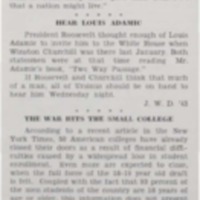 Student pieces reflecting on the year that has passed since the attack at Pearl Harbor and the effect the war is having on small colleges.

A year after the attack on Pearl Harbor, a student editorial was published in the Weekly reflecting on the past year. The author, signed as J.W.D, writes about how America is still united in the cause of protecting freedom, "America stands united in one cause, but it is only fitting and proper that on this anniversary America should re-dedicate herself to the one cause for which men have always been willing to die - the cause of freedom." (J.W.D. Monday, December 7, 1942). He writes about how the fight must continue and how America must persevere and work toward victory so that the dead did not die in vain. For a student in a small college thousands of miles away from the front lines, J.W.D wrote with the determination and belief as those on the front lines would.

In an article placed underneith J.W.D's article, another students writes about the economic ramifications of the war on colleges. The author claims that small liberal art colleges are the ones being hit the hardest, "Probably hardest hit by war conditions are the small liberal arts colleges which, relying on men for at least half their enrollment, will be forced to close down due to budgetary difficulties." (E.E.H. The War Hits The Small College). 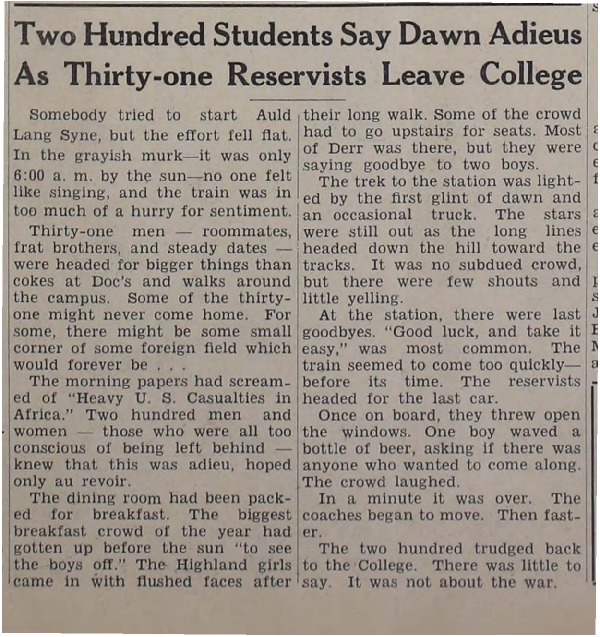 Thirty-one reservists had been called up for training and two hundred students walk them down to the train station.

In late February, 1943, thirty-one reservists who were students at Ursinus College got called up for training. The morning they were set to depart on a train, two hundred other students showed up and escorted them down to the train station. The article which appeared in the Weekly described what happened, "The dining room had been packed for breakfast. The biggest breakfast crowd of the year had gotten up before the sun "to see the boys off."" (Two Hundred Students Say Dawn Adieus). The Ursinus community rallied around these men and showed their support in a fantastic way. However, with the departure of these reservists, it made the war a very real thing for Ursinus and the students here with the realization that maybe not all of these men will come home, "Some of the thirty-one may never come home. For some, there might be some small corner of some foreign field which would forever be..." (Two Hundred Students Say Dawn Adieus). That was not enough to dampen the mood however. This send off was about the Ursinus community coming together and showing overwhelming support for their own, it was not about the war, "There was little to say. It was not about the war." (Two Hundred Students Say Dawn Adieus). 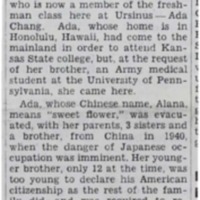 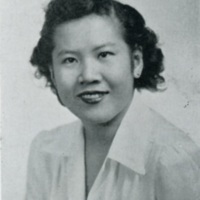 Ada Chang came to the United States as a Chinese immigrant in 1940 with her parents, three sisters, and a brother in fear of a Japanese occupation of China. While she was on Hawaii, she became a witness to the attack on Pearl Harbor. From there she found a home as an Ursinus student in 1944. She was so bright that she tackled the course load of the accelerated program and graduated in three years. An article was written about her in the Weekly to preserve her experience and she provides a direct connection between Ursinus College and Pearl Harbor with the unique distinction of also being a Chinese immigrant.