While demonstrations were not a common event on the Ursinus campus, the Weekly, and by extension the student body, became more aware of what was going on in the world around them. While eventually the campus will settle back into a comfy, local, status-quo routine, there is a small window in which the Weekly focused on more than just Ursinus. As we see in this edition of the Weekly, there is discussion about the legality of punishing protestors and how to avoid getting drafted.

If we are using the Weekly as a way to begin judging what students were thinking about on campus, then this would be a good indication that students are beginning to become more aware of the situation the United States is in and how they feel about it. As I said in the opening of this section, in no way do I believe an article or series of articles can encompass every student’s thoughts on the matter, I do believe it is at the very least representative of what was on people’s minds. No longer were students solely locked in thinking about who the Homecoming Queen would be but what was going on in other campuses and how the events of demonstration across the nation could affect them here at Ursinus. 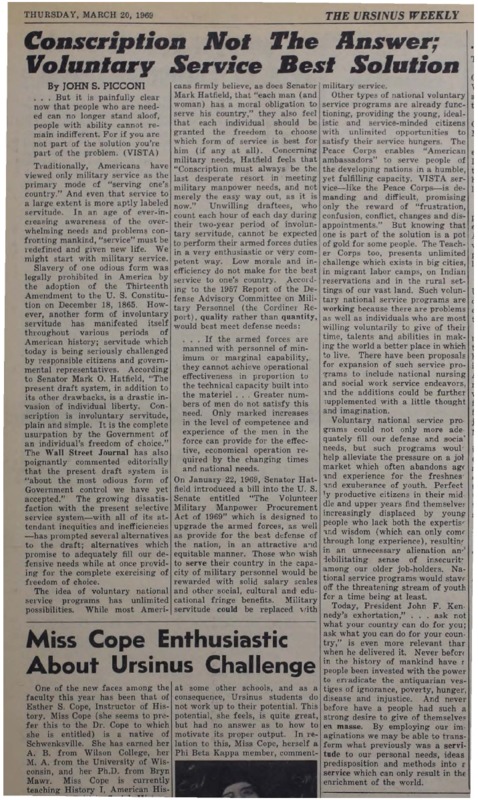 In an article, student John Picconi makes the argument that voluntary service would benefit the armed services more than the draft. He argues that the military would best be served by having quality over quantity.

This is another example of how these bigger ideas that were floating around our country began to get caught up and made their own by Ursinus. While often times, and as we will see, it is easy for Ursinus to get caught up in its own desires and goals, this is one of the pieces that could easy have been published at any college in the country at this time. This piece is not about Ursinus students. It is about a system the author thinks could be replaced with something better and more efficient. While every campus may more easily accept or reject his idea, it is something that could start a discussion. This piece was written not just for an audience of Ursinus, it was written with the intended audience of college students in general. That's a concept I happen to like very much and wish we saw more of. 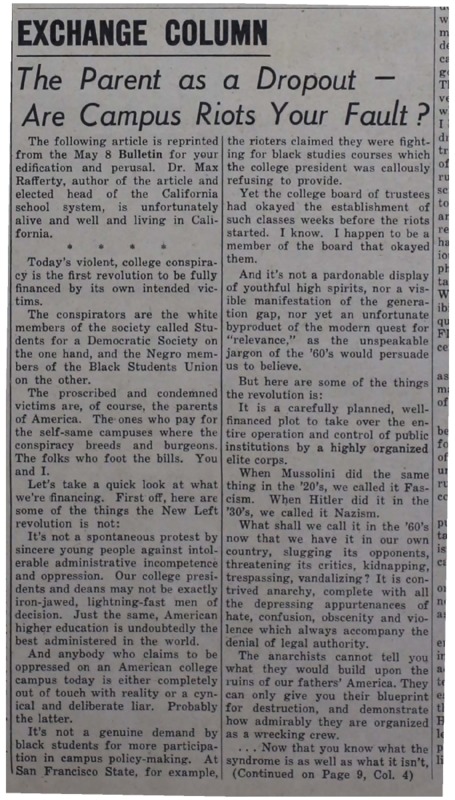 This piece threw me for a loop. It is so contradictory to anything that had been published in the past year. While it is spreading a message that opposes most of those in the Weekly at this time so you could argue that it is journalist's duty to present all available information. However, the rather rude introduction to this article makes me think that is not the case. I do not believe it is supposed to be a satire piece. The cited article seems all too serious.

I am left to believe that this piece was included to spark some outrage among the student body. The piece does a pretty good job at insulting the vast majority of college students and essentially says they still need to be babied and protected from themselves but I am left unable to answer why this piece was included. I do not believe the answer can be as simple as the editor having a desire to share this and show that there are people against the student movement. The optimistic part of me wants to believe it is another example of how Ursinus is adopting and picking up the movements which were all across the country but other than that, I cannot draw a conclusion. If you read only one article in this project, I suggest this one because I find it to be such a mystery. 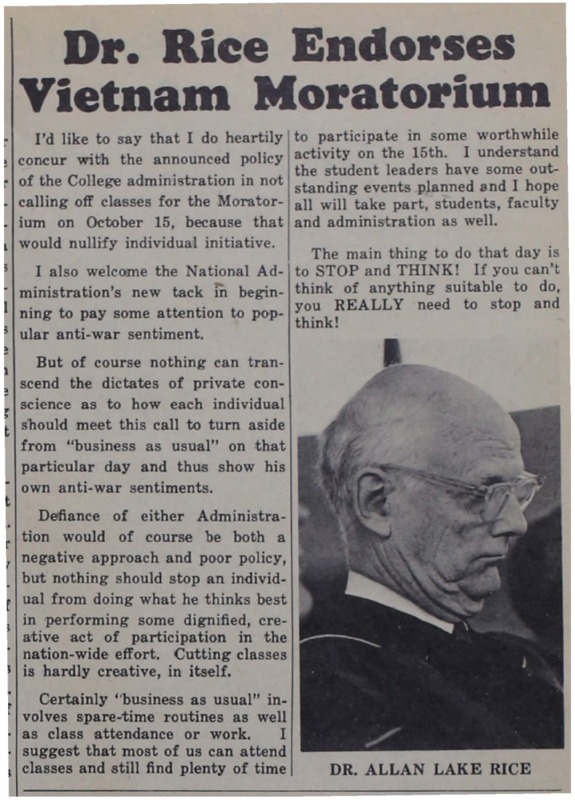 According to both Dr. Smith and Dr. Doughty, Dr. Rice was one of the few outspoken faculty members against the Vietnam War. While Dr. Rice believes the College could still conduct classes and hold a moratorium, the message he wanted to get across was that the moratorium was an opportunity for everyone to think about the war and what was happening, "The main thing to do that day is to STOP and THINK! If you can't think of anything suitable to do. you REALLY need to stop and think!"

Dr. Smith explained to me that views and discussion about the Vietnam War did not often happen between students and faculty. When he was saying how not many of the faculty involved themselves in the discussion, he described it as being a "subterranean issue."