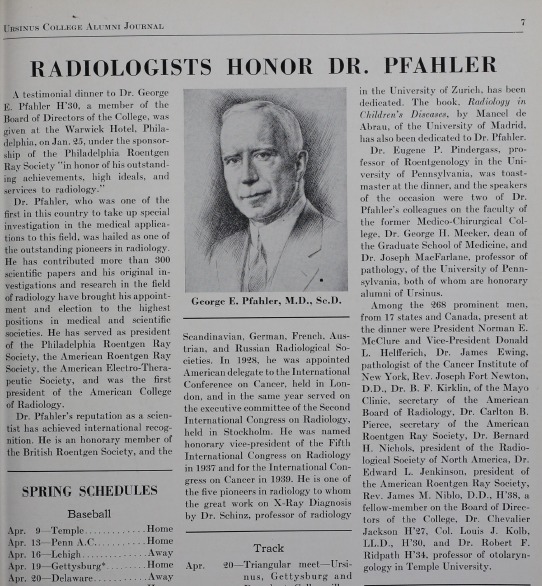 This article gives a description of the awards and positions held by Dr. Pfahler, the namesake of Pfahler Hall. 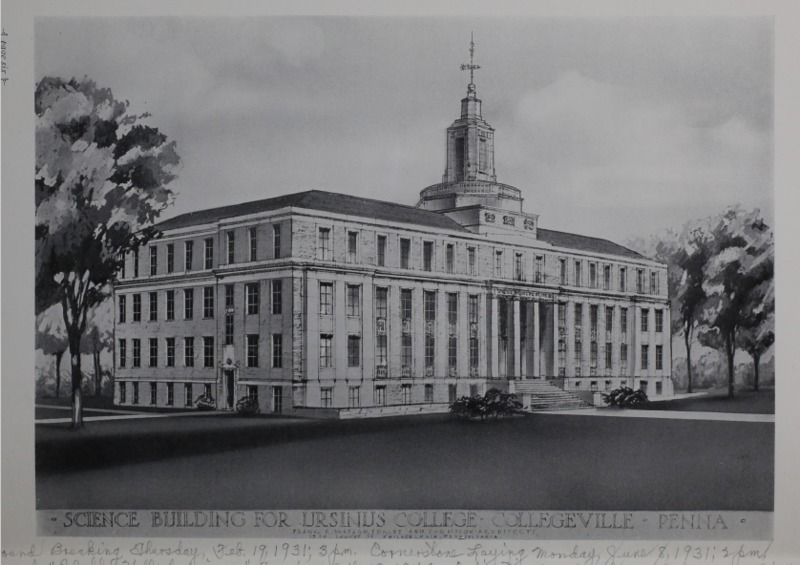 A sketch of the new science building at Ursinus College. 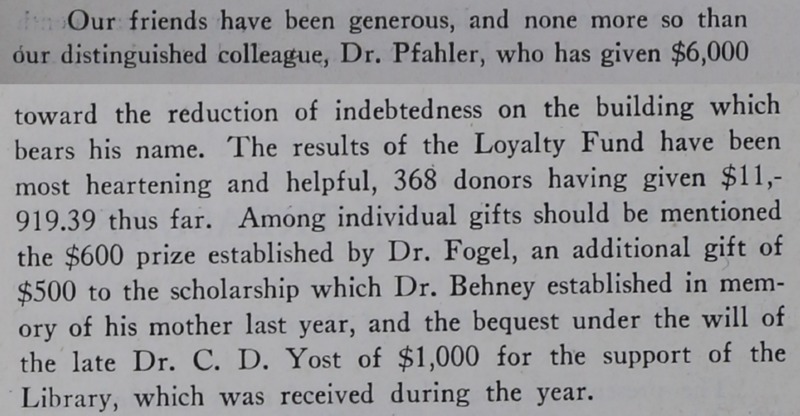 This article gives the monetary amount donated by Dr. Pfahler to aid the college in paying for Pfahler Hall's construction. 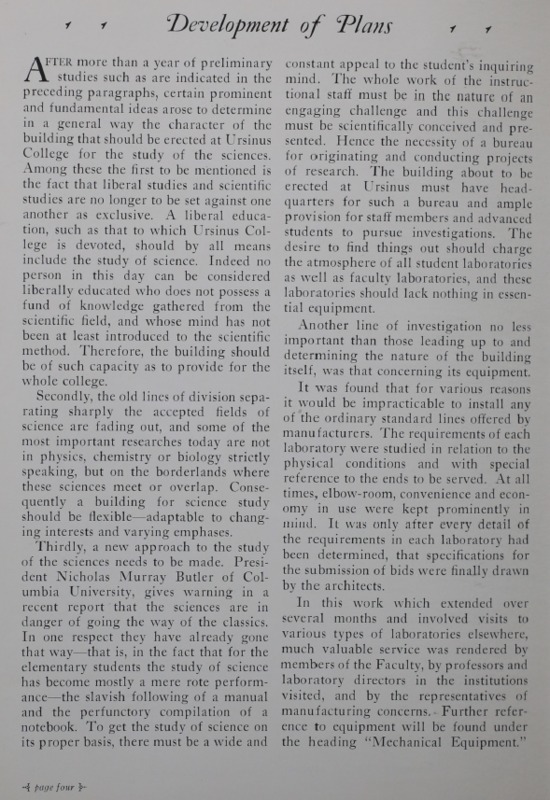 This article elaborates on the benefits of including science in a liberal education, providing an atmosphere for scientific collaboration, and challenging students so as to further their scientific understanding. 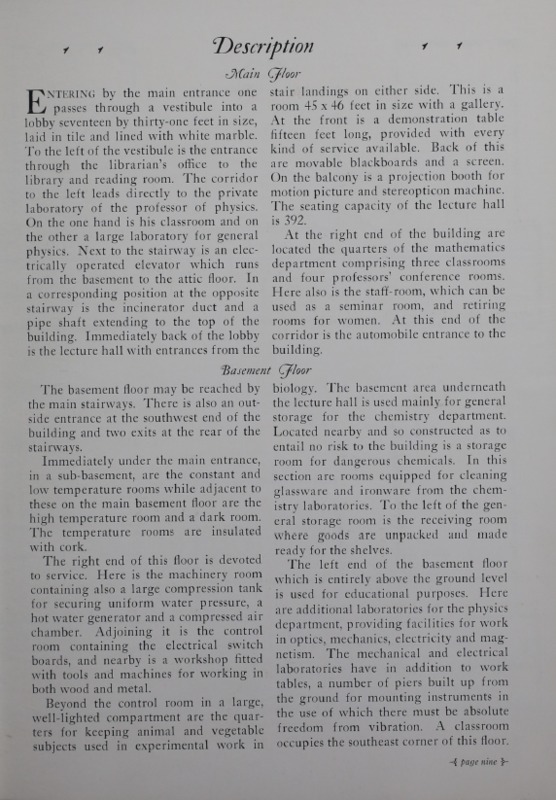 The main floor and basement floor rooms are detailed in this article.

Many legends often gain short, descriptive names, and, due in part to the ambiguity of a story that has been condensed to “There are sealed labs somewhere in Pfahler, but I don’t know that you can get to them – they were used for radioactivity experiments”, this legend has become known as simply “The Sealed Labs of Pfahler” or, sometimes, “The Radioactive Labs of Pfahler”. However, the legend was likely not presented this way in the years shortly after the labs were closed off from the general student body. Pfahler Hall gained its name in the 1940s, after the time when the physics curriculum was altered in a way that removed the terms ‘radioactivity’ and ‘x-rays’ from the course description, but it's unlikely that this change would have had an effect on how students referred to the shuttered labs in the science building’s basement. The Hall being officially christened in honor of the well-known radiologist Dr. George E. Pfahler, who gave $6,000 toward the hall’s construction, could have created an even stronger connection with the tumultuous emotions associated with radioactivity [1] [2]. Having no explicitly recorded history, residing right below the entrance stairs of one of the most populated buildings on school property, and being directly linked to a scientific discovery with an up-and-down public relationship are all possible contributors to the longevity of the story that surrounds these labs.

While not a highly detailed urban legend, the more generalized perception about the creepiness of the basement space, the scientific area being studied, and the history beginning in the 1930s has played a role in turning this place into a legend site. The mystery and adventure-aspects have also kept word of the labs circulating in the modern iteration of campus, perpetuating the idea that ‘all is not as it seems’. What I knew about this location before even entering the archives to confirm if it was real or not was that simple sentence about their existence, mentioned in passing during a conversation with a professor. With just that comment (and no backstory, details, or map to accompany it), I started uncovering the details that have been presented above; but are there any other reasons as to why the only remaining fragment of memory being passed around is that “they existed, but now they’re off-limits” and what could this mean about our contemporary understanding of the labs?

One way to approach these questions is to consider the cultural perceptions about radioactivity before the construction, during the time in which the labs were in use, and after the curriculum changed to no longer include radioactivity experiments. As mentioned in the overview of radium and radioactivity history, the former was ascribed “vitalizing, restorative, and life-giving powers” and was commonly associated with puzzles and mysteries during the years soon after its discovery (an interesting connection, since life is often described as ‘mysterious’ as well) [3]. Marie Corelli, a novelist from 1886-1925, described “the ‘Soul or ‘Radia’ of a human being’” to reflect the radium obsession of the time and the element was said to almost become a living thing due to its constant personification by those of all ages and career paths [4]. However, as the 1930s rolled around, anxieties began to be voiced about the effects of radioactivity and the 1940s secured the new association of “apocalyptic danger” after the atomic bombings in Hiroshima and Nagasaki [5] [6] [7]. The idealistic sentiments of earlier years were infected with the paranoia that radiation and anything associated with it must hold an “invisible insidiousness” and be “inherently and irremediably dangerous”; through this shifted lens, American culture began to change how it interpreted locations related to radiation and radioactivity [8] [9].

Such a turnaround in perception could explain the vagueness of the remaining legend. Because ghost stories and mysterious places metaphorically present the question of “Who knows?”, and because Pfahler is a Hall of Science, a place dedicated to uncovering the unknown (and inscribed with the words “But still try, for who knows what is possible”), it is very conceivable that the legend survived the years and gained it’s ‘spooky’ reputation from the shifting feelings regarding radioactivity [10]. After all, ghost stories do not just serve the sole purpose of sending some thrills down a listener’s spine; they also act as communicators about our culture, they invite the audience to interpret the story, and they encourage debate between listeners [11]. If the content of the tale becomes uninteresting to an audience, then the legend will die off and exist only as a memory to those who heard it when it was still able to circulate [12]. This story remains on campus, even as a short, passing comment, because:

(3)   It embodies the very heart of the Hall’s ideals: Who knows? Go find out!

[9] Matthew Lavine, “The Early Clinical X-Ray in the United States: Patient Experiences and Public Perceptions," Journal of the History of Medicine and Allied Sciences, vol. 67, no. 4 (2012): 588.