Protests, Graffiti, and "Next - The Tree" 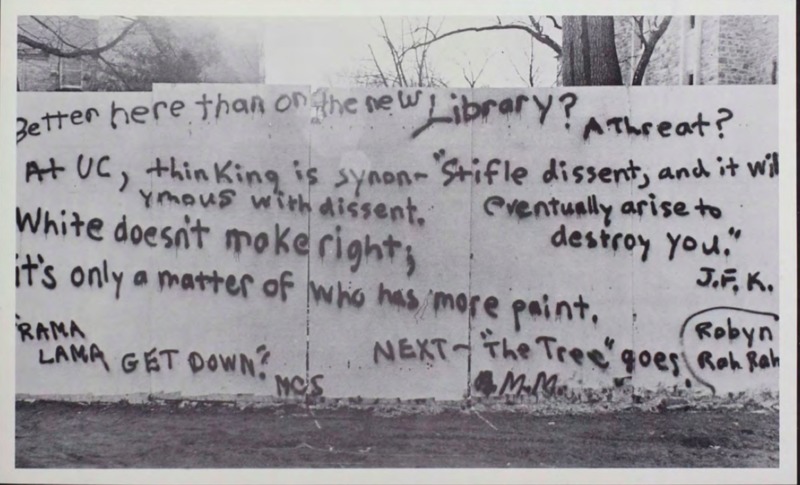 Graffiti and protest photo from the 1970 Ruby Yearbook.

When the tree went missing it, it spoke legions about the climate of 1969 and the dissension between the students and the administration. A Peace tree circled in protest and mysteriousness, the tree was destined to be a legend in this time of political and social ambiguity that stretched over many years, leading us to today. We began our search to find our missing tree, to bring strength and courage and hope back to our campus, but we’ve come to see the impact a single tree left on the campus as we uncover more hidden truths. The memory of the Vietnam War haunted the campus in 1969 and the tree is a stark reminder of all that Collegeville and Ursinus had to lose.

One theory that’s being developed is there was so much protest surrounding the Vietnam War that Ursinus decided to let the tree fade into history and try to keep the campus peaceful. Though this theory can be possible, one would find it unlikely because Ursinus made sure to document it for the short time it was releveant in Ursinus history. The administration was constantly backing the war efforts by planning a day of moratorium and pushng the Vietnam war conversation. The dissenssion tore students and the admintration apart when discussing the Vietnam War. While there is minimal proof in the Ursinus Weekly or anywhere it can be seen in the source below.

One of the best finds was from the 1970 Ruby, which contained a picture of vandalism in the form of graffiti [1]. The graffiti didn’t connect to anything at first, until I realized the Ruby says, “Next - ‘the tree’ goes.” When I first came across this picture when Carolyn Weigel first visited the class, I thought nothing of it. I didn’t even see the tree protest until two days before presentation on December 8th, 2017. I realized the dissention was much more severe than let on [2]. This may give proof of my theory above that the dissension was so severe that the school allowed the tree and moratorium to be forgotten. They tried to have this moment in history forgotten, but history always comes back. The Peace Tree is something that can stand for more than just war and death, but rather, the bravery and strength of the men who lost their lives, not just in Collegeville.

One would think such a small thing, like an inconsequential tree wouldn’t weigh on the campus so much, but I guess that's the thing about myths and legends. The things people think are small or useless are some of the things that leave the biggest marks on history. The tree symbolism and meaning aren’t inconsequential, though. It’s amazing how something can leave a mark on society even all these years later [3]. How a tree that was in the past is here now affecting each person I mention it too. It’s how oral tradition and memories of the war caused discontent in 1969, but now in 2017 it’s brought so many people together [4]

Though it brings people together in 2017, back in 1969, there were articles rejecting the Vietnam War as a whole. The protest was focused on college campuses and it was said that the leftists didn't agree with war sentiments that were being shared [5]. Most of the population agreed with the war efforts, but the small liberal campuses were against bombing the country for retaliation. Soem agrued that the war wasn't to free Vietnam of communist control, but rather to assert U.S. dominance and power.

The irony of all this protest is, just like how the tree affects people now and the past is coming back  around, we have already seen this dissenssion and protest make it's way back in November 2016. When Donald Trump was running for office students and general public alike banded together in protest. People said Trump just spouted sexist and racist venacular, just like people just said that the Vietnam War was justifed. Donald Trump won the election, but I'm not sure anyone can say we won the war...not after all the lives lost...not after planting a scroll with the names of the men who lost their lives under the tree.

One thing we can see in history is that things make start out small and unimportant, like a baby tree being planted in the ground. When you give history time and substance to grow, then you have not just a huge tree, but a moment that will last decades.

History and protest are inexplicably linked because the protest and quiet march towards what is right will quickly turn into a roar. The peace tree started out as a sign of stability, but as the war chugged along, it quickly turned into something angry and negative. Maybe that's why Ursinus hid it because it caused so much negativity and vandalism that they felt it was best to let the Peace Tree turn into the missing Peace Tree.

I guess there is no right answer. After all, everyone see's history differently.

2. They do have Dr. Rice endorse the Moratorium as a sign that student should follow a respected professor into the "accepted" way of viewing the war.

3. See "An Apology for Peace" in the gallery on the The Phantom Peace Tree page or down below. This article was orginally printed in 1943. History always comes back around.

4. Most of the information in this section is conjecture, due to the vague facts in the source material. One can draw conclusions that authors/students were censored, especially in 1969. 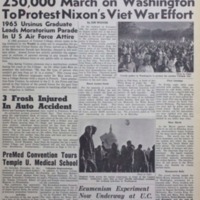 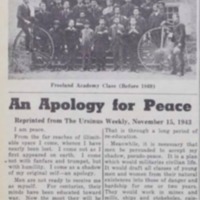 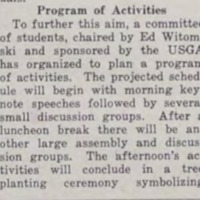 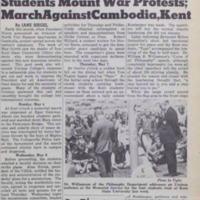 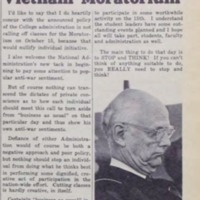 ← Where It All Began
No Peace For The Peace Tree →
The Phantom Peace Tree
Protests, Graffiti, and "Next - The Tree"