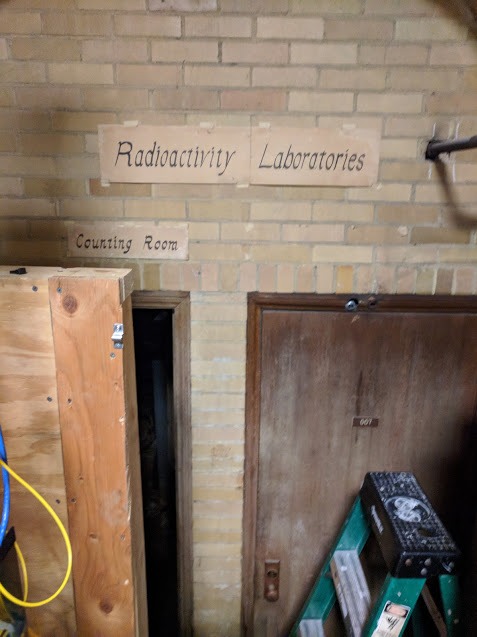 With the 'Radioactivity Laboratories' label still intact, the entrance to the labs requires a ladder to climb down to the doorway - it's never easy to get to the best secrets! 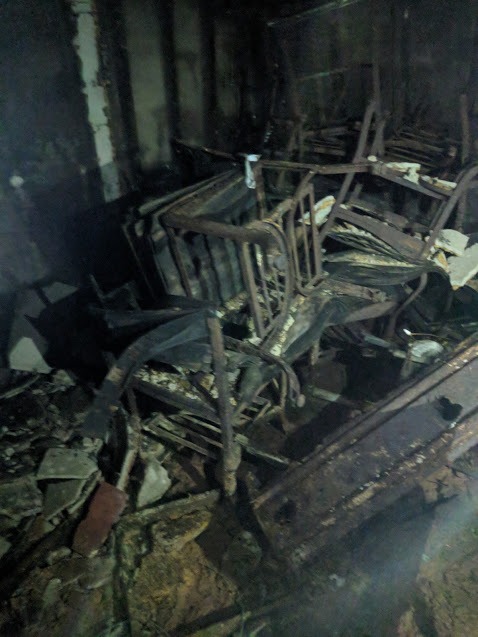 Rusted desks are piled high on the muddy ground inside one of the two sealed radioactivity labs. 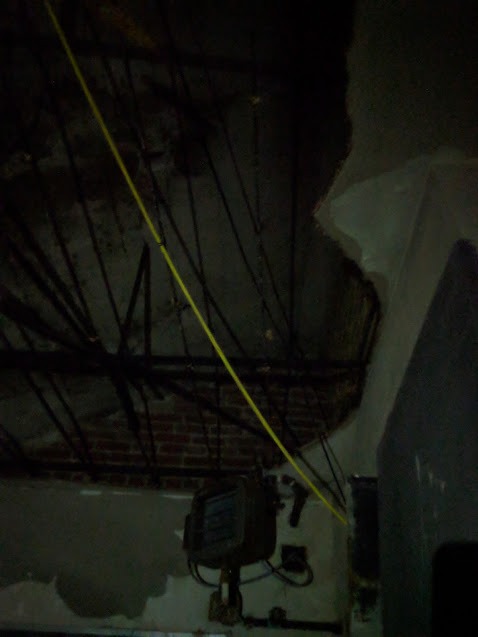 Looking up shows just how old these labs are - the ceiling is exposed while students clamber up and down the stairs directly above us. 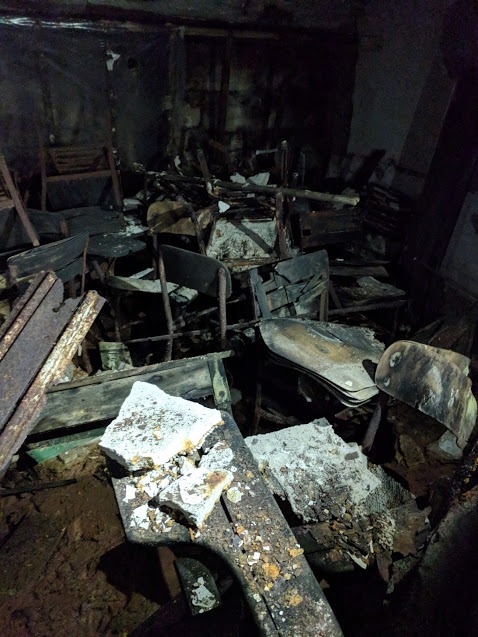 This image provides a better look at the full lab. The rusted desks and crumbling cement shows both the age and the isolated nature of this location. It's exactly how many people picture the ideal living space of a ghost! 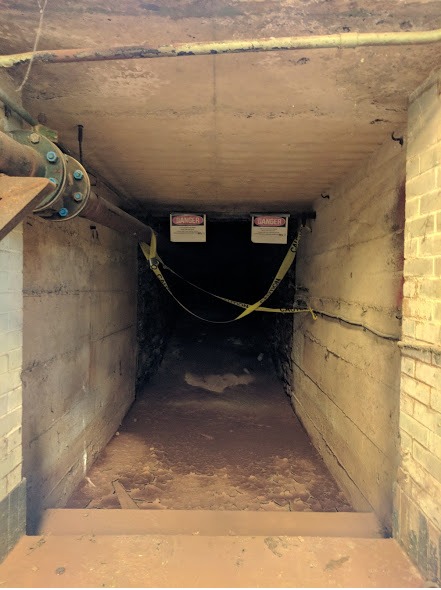 This is one of the tunnels under the grounds of Ursinus College, but it is no longer in use.

After spending a significant amount of time in any one area, it’s easy to imagine how people become entranced by the idea of ‘secret’ spaces that hide just out of site in everyday places. For me personally, many of my physics classes have taken place on the first floor of Pfahler, but I’ve also spent my fair share of time on the lower levels, so after hearing about the sealed labs in passing comments, I decided to find out how much truth was actually involved. Hundreds upon thousands of students had already entered Pfahler with textbooks and left clutching diplomas before I’d even had an inkling that the labs exist, but not one of those students had ever stated exactly where the hidden location would be, and not having seen any blue prints of the building (I was, after all, a swamped college kid trying to pass my classes), I wasn’t quite sure if the doors under the main staircase led to anything more than a storage closet.

The best place to start was in the archives, and while I was digging around there I had the good fortune to befriend Carolyn Weigel, who in turn knew just the man for the job of blowing off the dust on this particular tale. James Shuttlesworth, the Director of Network Systems and Infrastructure on campus, knew exactly what labs I was trying to find, and very generously offered to take myself, Carolyn, and my Bears Make History project group down there to show us around the normally unseen locations of Pfahler – and we accepted very eagerly. It’s not every day that you’re afforded the opportunity to literally climb down into an urban legend!

Legend tripping is another name for this kind of adventure, allowing you to directly encounter mysterious stories in their natural setting and, through this exploration of the ‘invisible’, you’re afforded a deeper look at the visible of the location that has become a part of the tale [1]. This was especially true for myself, having spent the majority of my college career inside of Pfahler. As we climbed down the steps that lead to the basement level, I was hyperaware of my surroundings and they added an extra layer of strangeness to the experience – I had studied in these classrooms, walked up and down this hallway so many times, yet their familiarity seemed to vanish as I looked at them from my new perspective as a legend tripper. We approached a side door that had almost become like part of the wall to me, a place that led nowhere.

The security systems and surveillance that protect this area don’t allow for any unauthorized entry, so it was a privilege to be able to walk inside [2]. When we entered, we were faced with an extended room that ended in a sharp drop off where the tops of two doors labelled in faded, old handwriting “Radioactivity Laboratories” were just visible. Mr. Shuttlesworth set up a ladder for us to clamber down to the muddy level of these doors and we filed into the mystery, our phones held high to shed light in the shadow filled labs. The squelching mud made for a tricky path, but we trekked along, swinging our lights around to see the stacks of clutter (rusted desks and crumbling parts of the ceiling) that had grown as the college’s lack of storage space called for the unused furniture to be shifted out of sight [3]. While renovations had occurred in the 1970s to try and fix the water damage, the labs were infrequently visited, as evidenced by the overall ‘haunted’ atmosphere of the place: spiders, shadows, mud, chill, rust, and echoes – exactly the kind of place in which you can picture a protagonist being trapped during the climax of a horror movie [4].

Strips of yellow tape labelled ‘RADIOACTIVITY’ fluttered in the breeze we’d let in as we slowly made our way back up toward daylight, but we had little fear of any remaining radiation – we had learned that only low-level experiments would have been conducted during the times in which the labs were functional, and, during a renovation, there was a sweep for any remaining items that may have been irradiated due to careless storage (don’t worry – those few that were found were removed) [5]. However, the traces of the past still remain very present, even if the radiation has faded. The products of science labs of all disciplines have had a tremendous impact upon our understanding of the world, and these particular labs have taken on a kind of liminal personality, that is, they are private things in public spaces [6] [7]. The grounds of the school are experienced more intensely through the folklore and legends that stem from places like these labs, and common halls and pathways are transformed into adventurous places; in the years to come, soon-to-be-alumni can look back on their explorations and remember when they were faced with mysteries so few are able to claim to have encountered [8]. Even those who only saw the stories as just that, stories, cannot dismiss the effects that the tales have, regardless of whether there is any truth to be found in them – their very existence serves as an influence [9].

Hopefully the preservation of the history and investigation of this legend will inspire future generations of students to continue exploring the many incredible layers of Ursinus’s folklore and history, allowing them to see just how many thrills and possibilities they can realize on campus with a little determination. After all, “Should a college be satisfied with the mere repeating of well-trodden paths of knowledge or should it plan and prosecute fresh adventures?” [10]