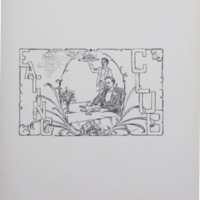 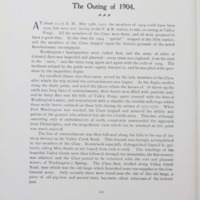 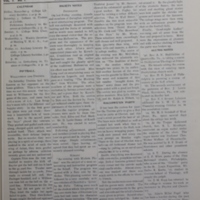 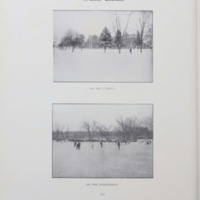 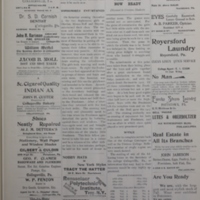 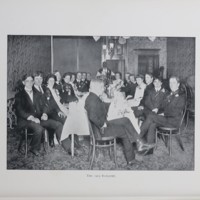 The last space that women found themselves in was often in entertainment or off campus. In the 1900 Ruby I came across something called Eating Clubs and was intrigued.[1] It seems as though groups of students would establish a club and go off campus together for a meal. This is similar to the present day invitation given from a professor to their class to either their home or out to eat for a special occasion. These clubs had managers, some with various positions or titles for people, club colors, yells, and mottos.[2] This, along with the number of these clubs, makes me believe them to be the real deal rather than a joke, especially because they all revolve around something as simple as going out to eat.

Most importantly, there is an eating club called the Olevian Club which is all women, except for maybe one or two people.[3] This is another example of women creating their own space. This is also important because it tells us that these women were going out and about; they were not confined to campus and potentially went out often to eat at various restaurants in the area. Despite not being in the other eating clubs with men, they were not excluded from the activity altogether.

Another form of unique social life was the role of entertainment at Olevian Hall. I came across two specific examples; the first was Halloween. It was apparently the tradition of women at Olevian Hall to throw a Halloween party.[4] An article in the 1904-05 Weekly noted that that year’s party was the best one yet. The women would decorate the house, have games, and sit around and tell scary stories.[5] Clearly women were part of campus life; they may not have been the center of it, but they were still a crucial part of it. One of the most interesting aspects of the Weekly’s description of the party was at the end, where the author refers to a song entitled “Good-night Ladies.”[6] It is a song that must have been well known, especially to those who frequented Olevian Hall, since it apparently needed no further explanation in the Weekly. In addition to the Halloween Party, according to the Ursinus Weekly, Misses Duryea and Neff were entertaining the sophomore class with games, refreshments, and food on Friday Dec 9, 1904.[7] One of the interesting aspects of this was that there was some class fighting going on between the sophomore and freshman classes.[8] Again, not only were people going to Olevian Hall, but they were being themselves, having fun, and even playing pranks on one another.

← Puns and Jokes
The First Women of Color →
Events