Perception of The Crigler Institute

The Grizzly artticle from Feb 9, 2012 demonstares how a growing opinion of the Crigler program is seen as "self-segregation,' and those who argue against the percieved idea.

"Self-segregation" Allegations Toward the Crigler Institiute

By 2012, students become more vocal about the Crigler Institute, and white students on campus coin the program as “self-segregation.” This attitude toward the program further isolates those students of color in the programs which aid them and create a support system (Summer Bridge & Crigler), from the predominantly white population at Ursinus College.

Several members involved with the programs argue against the idea that they are a form of "self-segregation." People like Paulette Patton, Rev. Charles Rice, and two former Bridge students, Minick and Young refute this idea by highlighting the academic compensations students recieve for any academic disadvantages they endured before college. Furthermore, they assess the "self-segregating" behaviors practiced by white students which Rice specifically points out, and the former bridge students support this with personal expereinces. 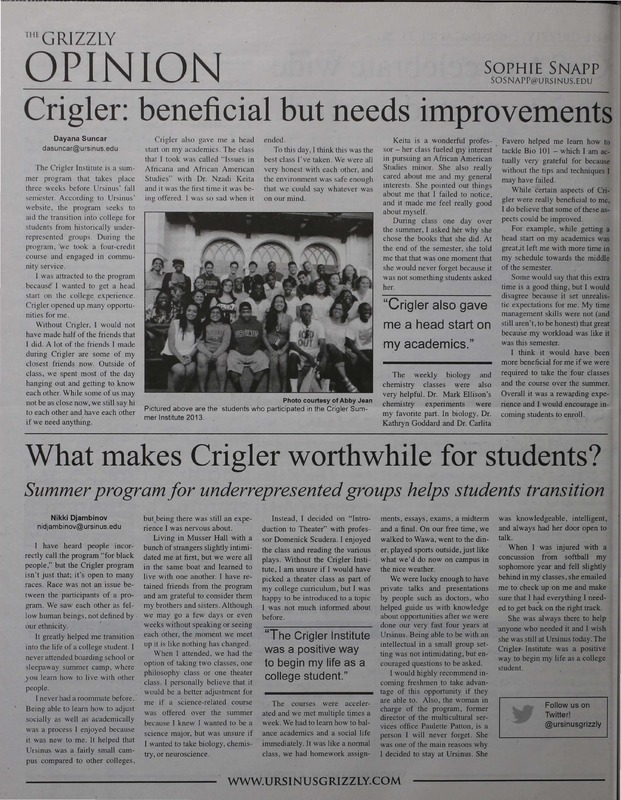 Articles from the 2015 Grizzly that focus on two students' expereince and value they hold for the Crigler program.

Community Value of the Crigler institute

Suncar summarizes the Crigler program as a beneficial headstart on what to expect at the start of college. The student expresses their gratitude for the family bond created by the program between students. Suncar emphasizes the perks of the academic environment, and mentions certain professors that guided her through her path of student success in being part of the Crigler family.

Djambinov shares her appreciation for the smooth transition the program gave her, and the adapted chaarctersitics she needed to learn to live with others. The student mentions the important relationships she formed with students and faculty that she feels welcome to rely on, and being exposed to classes that she would have not taken if it were not for the Crigler program.