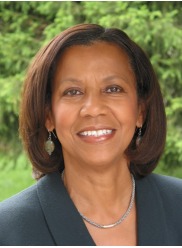 A picture of Ms. Paulette Patton from the Summer 2014 issue of The Newsletter of the Office of Multicultural Services.

Paulette Patton, Ursinus College’s former Director of Multicultural Services, was (and still is) an important facet of Ursinus College history. She had previous experience organizing and sustaining Bridge programs at colleges like Ohio Wesleyan University. Ms. Patton moved from Delaware, Ohio to Collegeville in 1995. She was introduced to this institution in May 1997. Once she came to Ursinus, she saw similarities in Ursinus and Ohion Wesleyan. Due to the lack of people of color on campus, Ms. Patton was determined to change that. Although Ursinus already had a Bridge Program, it was revamped by Ms. Patton in order for the program to be more academically rigorous. In return, the “Paulette Patton approved” Bridge Program brought in more students of color, which included Black and Latino students, making the percentage of People of Color to rise. From the beginning of Ms. Patton’s time at Ursinus to 2010, many things had changed. For example, there was an African American woman USGA president (for the second year), a newly elected African American male USGA president, an African American female who was head of the nationally ranked gymnastics team and more. There were thriving cultural groups such as SUN (Sankofa, Umoja, Nia) and ALMA (Associated Latinos Motivated to Achieve). In addition, the presence of African American males who were a part of a historically Black Greek fraternity was also on campus. The world of Ursinus was forever changed with the presence of Ms. Patton.

In 2011, the Bridge Program, at Ursinus, permanently changed its name to the Crigler Program in order to honor the first Black graduate from Ursinus College, Dr. William Crigler. Ms. Paulette Patton stated, “In honor of his legacy, what a fitting way to choose February as the unveiling of the Crigler Institute.” (from the February 2011 edition of the Ursinus College’s The Grizzly)