In the beginning of the 1970s, students were starting to notice just how unfair the school’s policies towards alcohol were. The USGA were at odds with President Pettit’ strict guidelines over the “Open Dorm Policy”, and essentially chose to allow students to do whatever they wanted in the privacy of their own room, and promised to not get anyone into trouble unless there were extenuating circumstances.

The mid-seventies proved to be a constant battle between the administration, and Ursinus students. It wasn’t until an incident that occurred in Reimert Hall in November of 1975 that the administration started to take notice of the problems that were occurring related to the current alcohol policies. Students were rebelling against the administration, sometimes in a violent fashion. They held protests out of Reimert Hall during the investigation into the November incident, and were threatened with police action if they did not disperse.

Moving into the late seventies, continuing dialog in the Student Faculty Administrations Relations Committee (SFARC) and the election of President Richter represented a major shift in Ursinus’ campus culture, and how involved students were starting to become in campus wide changes. 1978 saw the creation of an alcohol policy that allowed alcohol to be consumed on campus, providing it was in designated areas, and properly registered with the Dean of Students. This shift in policy, driven by the faculty and students, became the stepping stone for the drinking culture we have today. 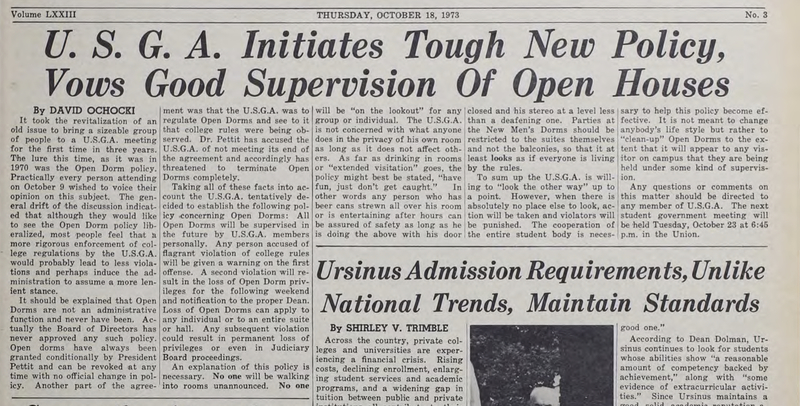 Mentions of drinking in the Weekly are dormant for a while, before emerging here in an article about "open dorm" policy. Surprisingly, the reporter claims that the USGA will "look the other way unless there is nowhere else to look." Essentially, they encourage students to "not get caught" if they choose to drink in the dorms.

On November 15th, 1975, a party in "New Mens Dorm" (Reimert) Suite 200 brings two deans of students from their homes to the scene, after an anonymous phone call complaining about noise. Arriving just after 11:00 PM, the deans attempt to contain everyone and take down students' names. The students respond agressively, climbing out windows, throwing bottles, yelling obscenities, and encourageing each other to resist being identified.

This event marks possibly the worst confrontation between students and administration. In the days following, students threaten to organize outside Reimert, and become increaingly adverse to the deans' attempts to investigate the matter. Coverage continues in the articles below, but this can be seen as the turning point toward directly addressing policy change, and including students in the process.

In the aftermath of the party, an editorial is written about how the deans unjustly handled the matter, and how additional student input is needed in regards to policy change. In particular the author call out the deans for administering ten demerits each to the four residents of the suite, leveraging unfair punishment upon them. Clearly, this party and its lingering effects jump-started debate about alcohol on campus. However, not positive change occurs until President Richter addresses the issue head-on in the late '70s. 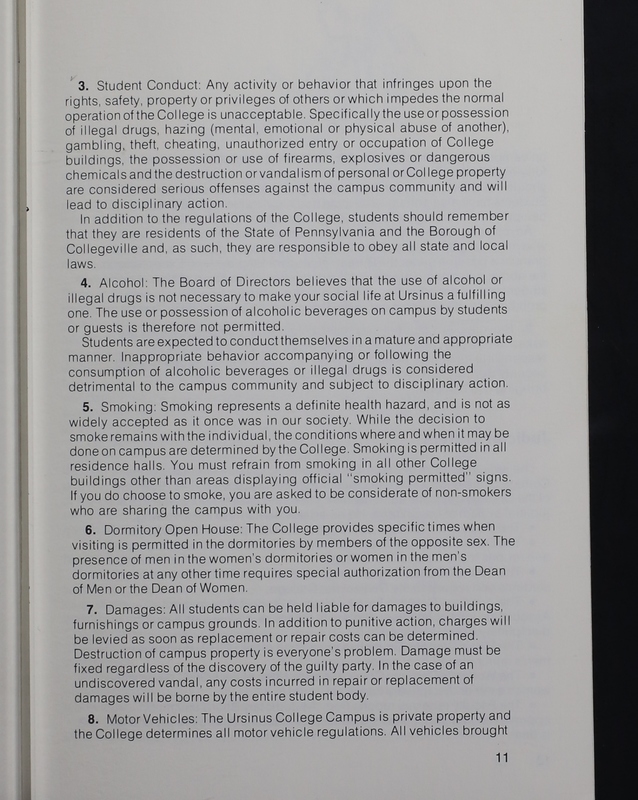 Alcohol policy presented in the 1977-78 Ursinus College student handbook, which states that alcohol is prohibited on campus.

The 1977-78 alcohol policy is simple: no alcohol is to be consumed on campus, and anyone who violates this is subject to appear in front of the judiciary board. As we have come to find out, many people did not agree with this policy, and outwardly expressed their dissatisfaction with the adminstration's naive outlook on alcohol. 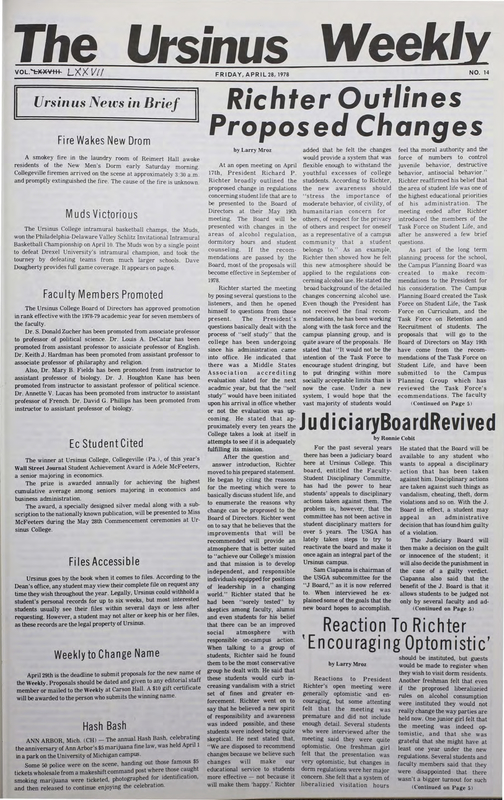 In April 1978, President Richter holds an open meeting to discuss changes to variuous policies governing social life at Ursinus. Among them is the creation of the Task Force on Student Life, which will take input from students and generate policy recommendations. Most prominently, Richter states that the task force will not "encourage student drinking, but put drinking within more socially-acceptable limits..." indicating that the college is ready to acknowledge its students' alcohol consumption. This task force continues to meet over the rest of the semester, and its changes come to fruition in the fall. 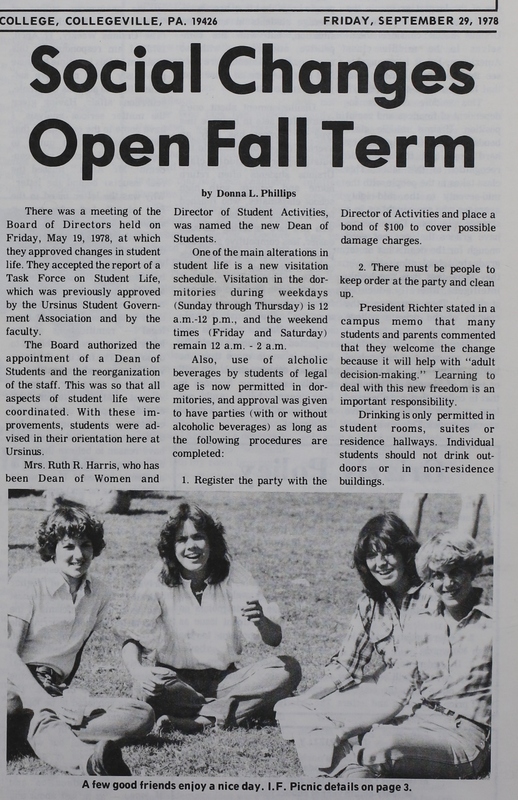 Fall 1978 brings the big changes discussed over the past decade to fruition. With the reorganization of staff (Deans of Men and Women were replaced with a Dean of Students), and new dorm visitation policies, comes the allowed consumption of alcohol!

At this time drinking is permitted in student rooms, suites, or hallways, and prohibited outside and in academic buildings, much like today. President Richter issues a memo stating that students and parents alike welcome these changes because "learning to deal with this new freedon is an imprortant responsibility." 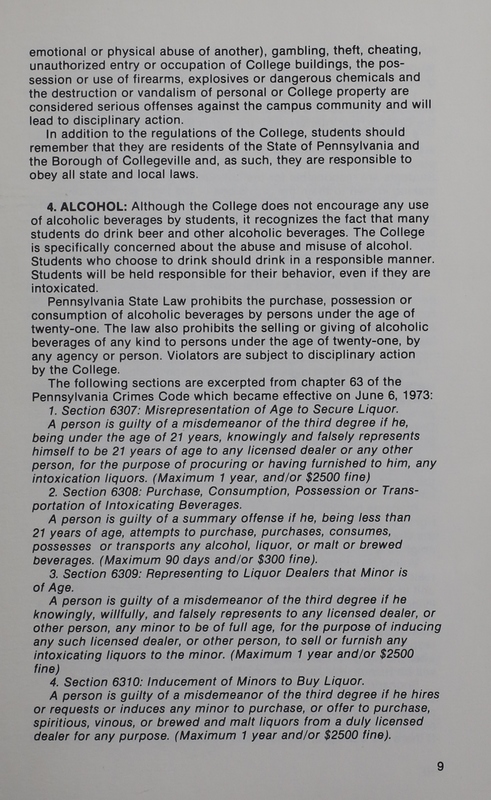 The change in alcohol policy for the 1978-79 academic year highlights the college's recognition that students are consuming alcohol. It details Pennsylvania state law, where the legal drinking age is 21 years old, and all penalities that may result in underage drinking. It also gives rules and regulations for where alcohol can be consumed on campus, and how many students can be in attendance of a registered party.

SFARC is replaced with a "Campus Life Committee" 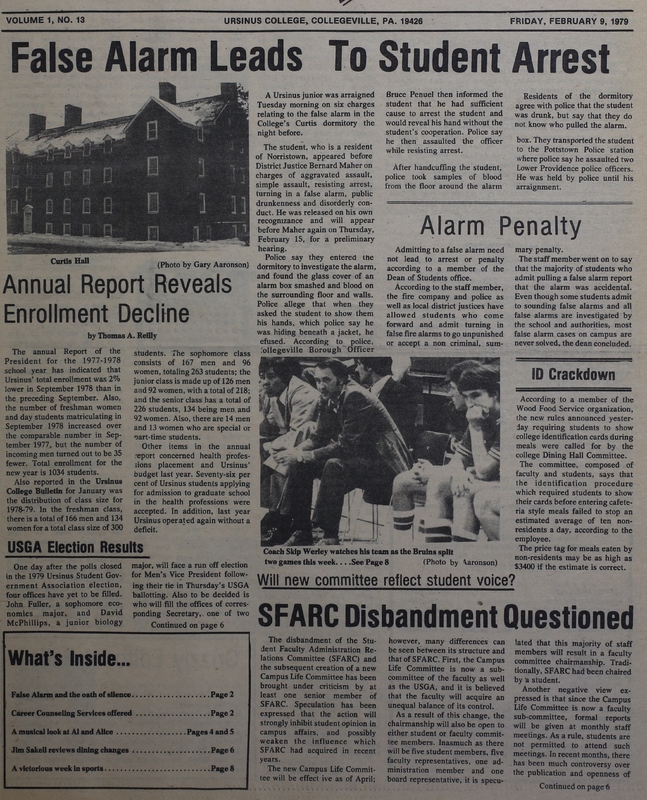 Concerns over the stucture of the new Campus Life Committee

Finally, in the spring semester of 1979, a committee is restructured with the mission of improving dialog about alcohol and other social issues on campus. The Student-Faculty-Administration Relations Committee, long responsible for fostering dialog about alcohol issues, is replaced with a new "Campus Life Committe." This new committee has many of the same responsibilities, but it is run differently and more directly tied to the Student Government to foster better participation.

However, debate soon springs up about the new structure, as seen in the second article. Students are concerned that the new committee will be dominated by adult voices, and that the results of its dialog will be discussed in some meetings students cannot attend. There is no record in the Grizzly as to whether these changes worsened the effectiveness of the committe, but it is clear that students remain concerned with how they will relay issues to those in power at the college. With this change, discussion of alcohol quiets down until the '80s.