The 1980's at Ursinus College were a crucial part of how students and administration learned how to interact with each other in practices that can still be seen today. The early 80's cracked down on the placement of alcohol on campus, limiting it to certain buildings. During this time the student run alcohol task force was still working on having a dominant say on policy changes. By the mid 80's you can see the conversation between students and administration starting, although the administration still is not letting the students have an equal amount of say in the matter. Strict rules and punishments are still being favored.

As well as the schools involvement, the mid 80's campus students are hit hard by an outside force, the Liquor Control Board, which the college has no control over. The late 80's show the rapid take over of the LCB and the many arrests made by them. The students push back, wanting the school to be a safe place for underage drinking. Dean Kane considers this and begins to work on policy changes with the help of students. This decade ends with the shocking statements made by faculty that students should not be pushing for changes but rather accept their fate as it is. The Ursinus College students of the 80's pushed hard against outside laws as well as school rules, and they certainly paved the way for the student and administration cooperation seen today. 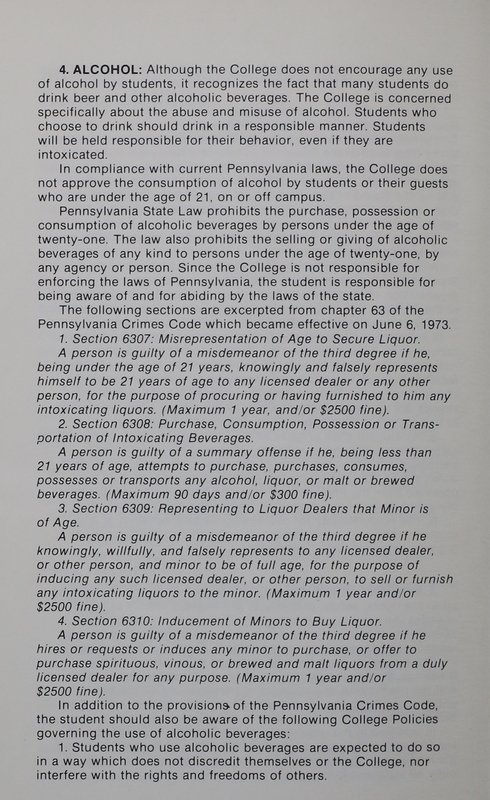 The policy adds more restrictions on where students cannot consume alcohol, including BPS dormitory, however kegs are still allowed on campus at this point. It also details the ongoing review of the alcohol policies for the upcoming academic year by the Student Task Force. This review will last about three years, and will add major changes to the policy. 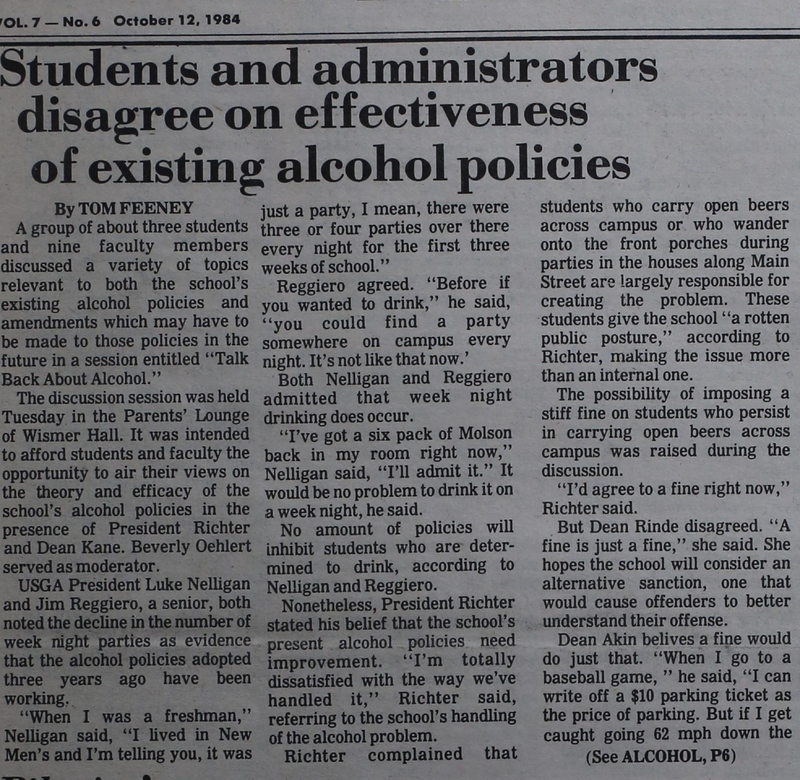 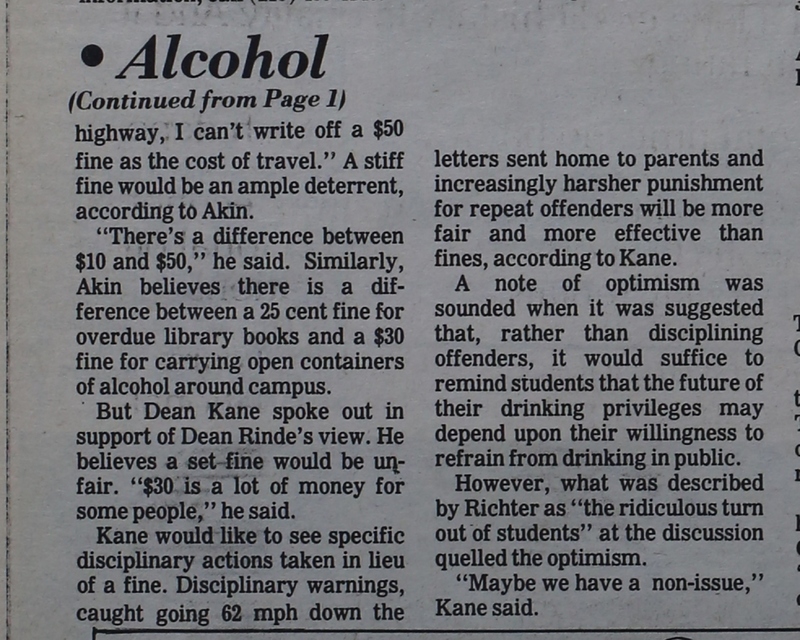 Here, a conversation about different approaches to managing alcohol on the campus takes place. Students make several statements about how they handle alcohol consumption, and the administration pushes back by suggesting fines and other punishments. 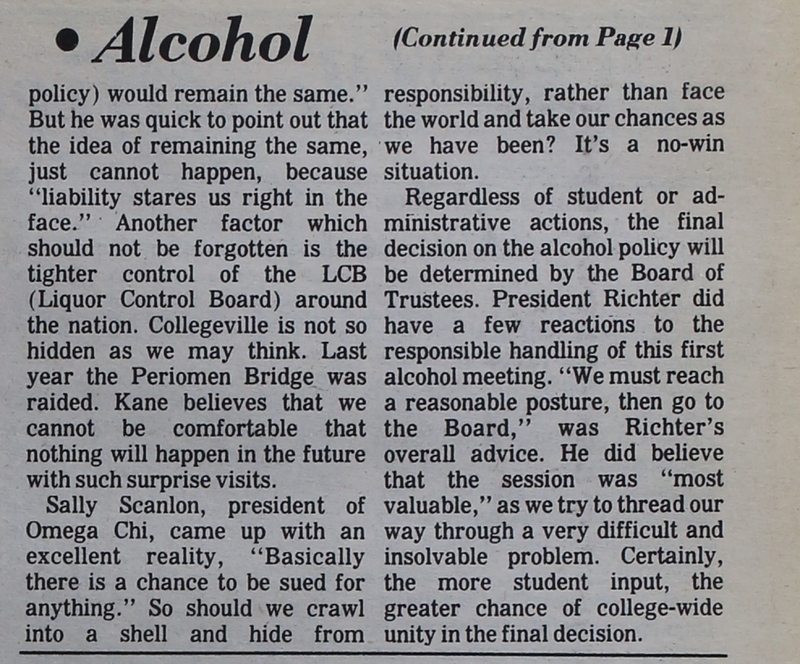 The conversation continues in this piece, which also contains a good summation of the action on alcohol policy up until this point. Finally, the piece foreshadows a future event (3 articles below) in acknowledging the PA Liquior Control Board's ability to intervene in cases of underage drinking. 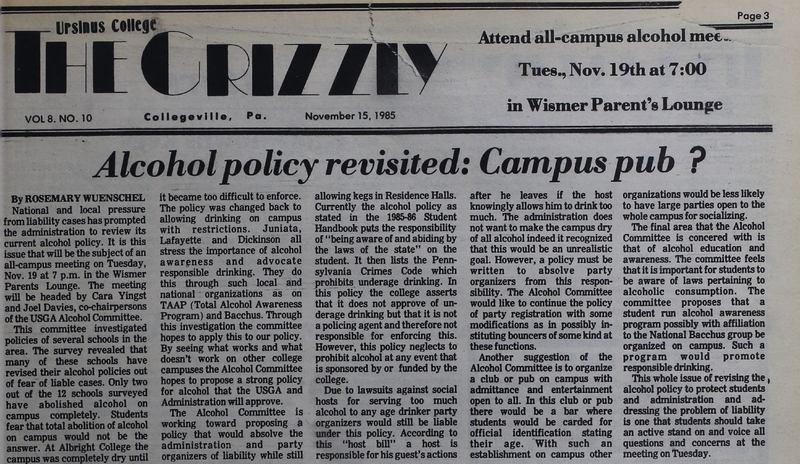 Discussion continues even further, maintaining the theme of liability, and how the college can protect itself when students are busted for underage drinking. Ironically, all of these articles foreshadow the Fall of 1986, where the LCB will do just that. 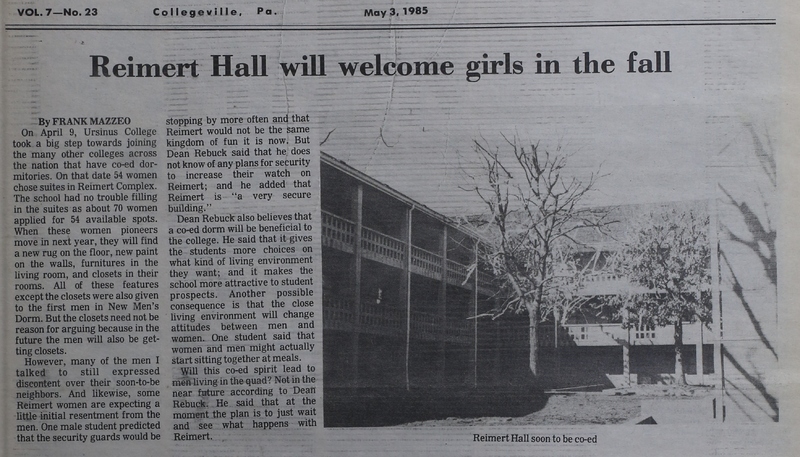 Taking a brief break from alcohol issues, Reimert admits girls for the first time in Fall 1985. 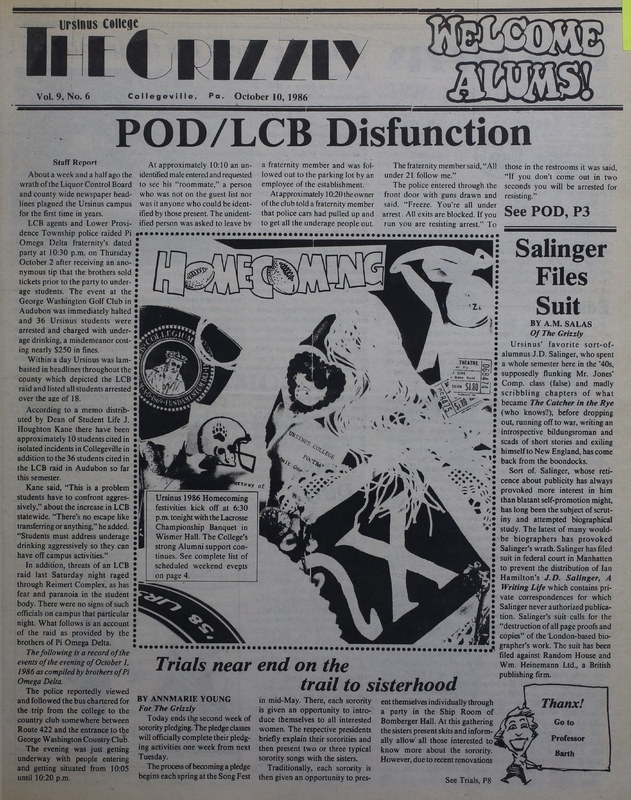 A detailed report about how the Liquor control board busted the fraternity Pi Omega Delta at their Dated party for serving underage students. The LCB had 36 Ursinus students arrested at the off campus party, & the discussion about underage students drinking on and off campus continues. Students who sold the tickets were penalized just as much as those who were drinking underage. 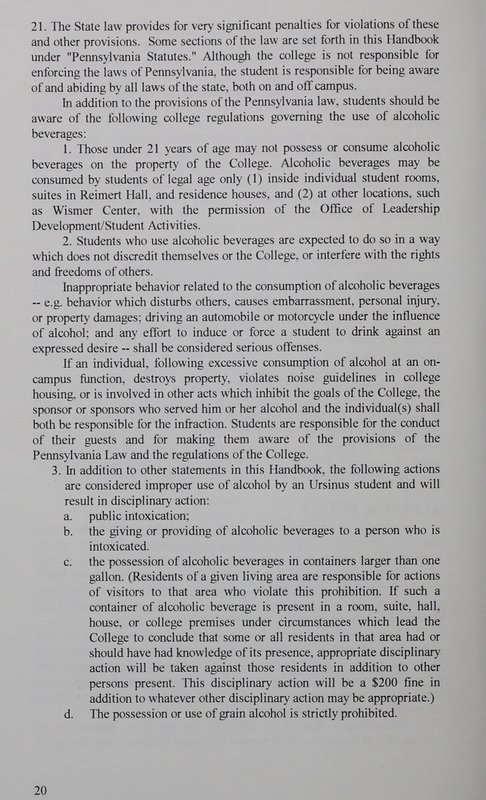 After extensive review of the alcohol policies on campus,  the 1986-87 handbook details specific drinking amount standards, stating that alcohol can only be consumed in containers 16 ouces or less. Certain drinking paraphernalia, such as kegs, beer bongs, etc., are not allowed on campus, and those in violation of these rules will be fined $200. This demonstrates the school's increased awareness to problems the new drinking policies have caused, and are making an effort to change them to better improve the safety of the students. 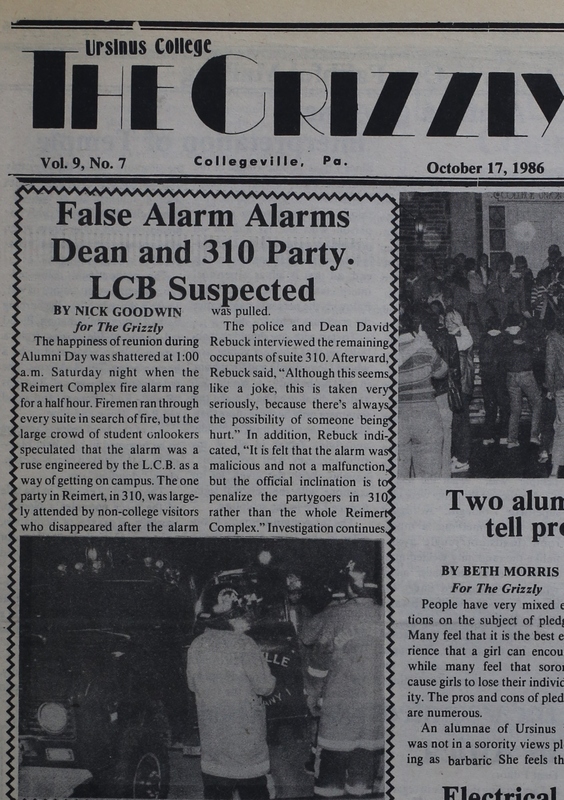 Investigation into Reimert suite 310 continues for a possible malicious motive of pulling the fire alarm, while others believe it was so the LCB could gain access to the building secretively. An answer is not definitvely found, students feel swindled by the LCB.

A student report of their investigation into what happened October 2nd when POD was busted by the LCB. This student speaks out about how the Greek organizations were struggling with the new alcohol policy and did not expect the LCB to be as big of a problem as it was. They end with the fact that there is no answer to who tipped off the LCB but that off campus parties were going to become more secretive and harder to schedule. 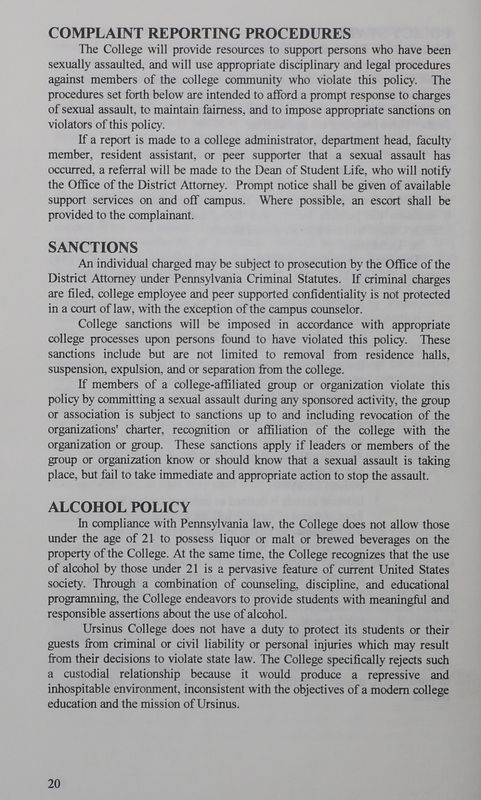 The college adds a paragraph to the 1987-88 handbook detailing how the college does not have a duty to protect students from any liability caused by underage drinking. They do not want to be associated with students who break the law, and who are disobeying the ideals and morals set forth by the college. This is the college's last effort to make sure students are drinking responsibly on campus. 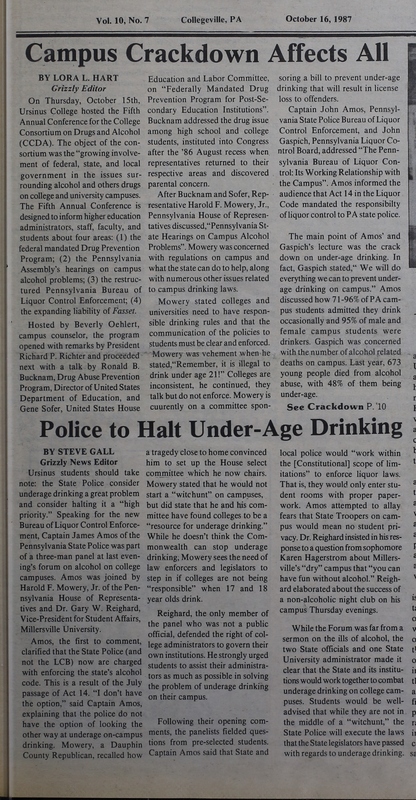 A report of the Fifth Annual Conference for the College Consortium on Drugs and Alcohol and the reitteration by the school that drinking under the age of 21 is illegal and that they will be getting more strict about it.

The lower article is stating how the police will be more involved on campus in order to uphold the law that is the drinking age.

Example scenarios made up by Ursinus students and Dean Kane that present regulation and enforcement alternatives, great example of the students working together with administration to make changes in policies. The conversation between students and administration about policy changes has begun. 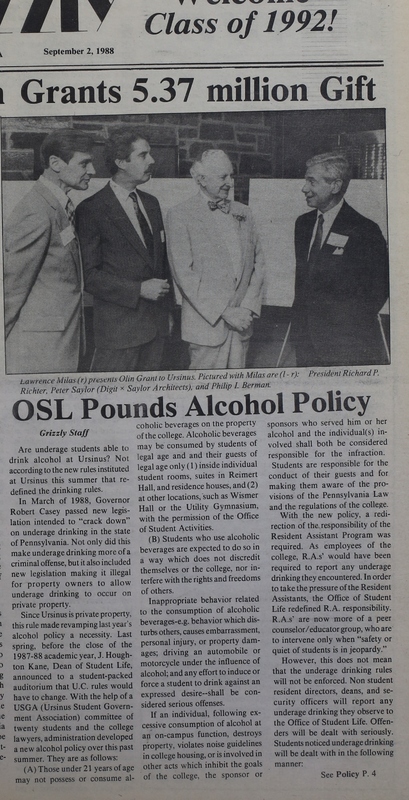 The problems faced when Dean Kane was revising the alcohol policy, including when Governor Robert Casey made it illegal to let underage drinking allowed on private properties. Student input got Kane to the point of revision only to be presented with more road blocks.

Multiple administrative viewpoints of the current policy, students are encouraged to work harder at abiding by the new rules. A small step backwards, students are expected to follow rules without question.

Our coverage of Ursinus alcohol policy history concludes here, but we encourage future students interested in this topic to continue our research. There remains much to be gleaned from the Grizzly and other sources, and changes continue to take place every few years. This is a volatile issue, caused by the conflict between federal and state laws, and the college's ambition to be a safe and fun place for students to socialize. Unless the drinking age changes, or the climate on campus significantly alters, the pendulum will swing on this issue for years to come.