Social Life on Campus during the 1930s 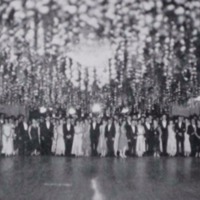 Pictured here is the Junior Promenade of 1933 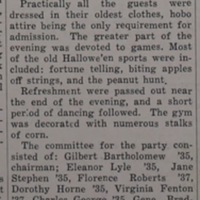 Ursinus College held Halloween parties in which party-goers dressed up as hobos, wearing their oldest, most tattered clothes. Party culture at Ursinus had really taken off in the 1920s, and translated well into the 1930s, where it would remain completely intact despite the looming presence of the Great Depression. The idea of a "hobo party" allowed students to poke fun and make light of the serious nature of the events that were transpiring at the time. 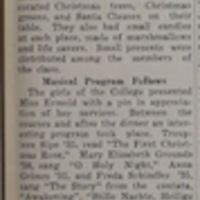 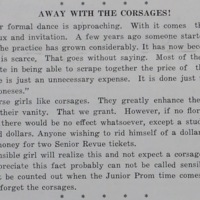 With the Great Depression came an emphasis on saving what money one had. This was no different for students at Ursinus, who struggled with paying off their tuitions, let alone buying themselves clothes. Female students soon argued against the idea of corsages being party attire, as they were far too expensive to be regularly bought. Eventually, the corsage faded away from the Ursinus party scene, with a far more causual look being adopted by female students. 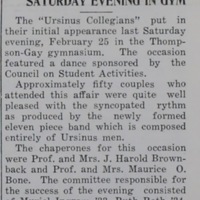 There was a Great Depression going on after all, and even students at Ursinus couldn't be entirely sheltered from it. While parties remained a mainstay on campus, the price of admission charged at parties was no longer welcomed by students. A movement began to lower the prices of many events on campus, such as, football games, banquets, trips, and parties. This article shows that these efforts found some success, as party planners began to charge less for general admission. 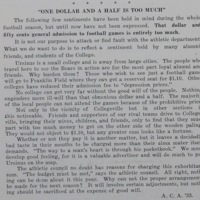 Times were tought for most everyone during the Great Depression. People could no longer rely on credit from the banks to pay for their purchases, and that left colleg students hard hit, as they now had less options when it came to paying their tuitions and college fees. As such, the cash students did have on them was more valuable than ever before, and couldn't be spent as freely as had been the case during the 1920s. This meant that events on campus had to reduce their prices, specifically dances / parties and sport events, the two most popular events at Ursinus during the '20s and '30s. 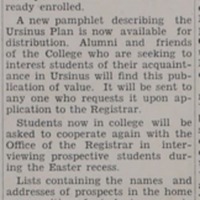 Despite the school's debt, Ursinus continued to see large enrollments throughout the 1930s, with enrollment never dipping below 450 students between 1930 and 1936. One explanation for this was the school's lax acceptance rate. Calving D. Yost in his Ursinus College: A History of its First Hundred Years described Ursinus' requirements for students to have been so easy, and so focused on a student's ability to pay their tuition, that "nearly a score was rejected." It's up to interpretation, whether the level of intellect of these students were just so impressive, or that the school was just so desparate for student income to help pay off their debt. The school would never manage to enroll a class of 200 students between 1930 and 1936, which was President Omwake's goal; but, nevertheless, did well in staving off the Great Depression when it came to enrollment. 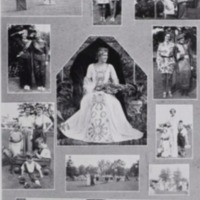 Pictured here are Ursinus students celebrating May Day (May 1) in 1933.

Despite the school's financial struggles, the spirits of the students were high. The atmosphere remained just as jubilant as it had been in the previous decade. The students partied and partied as if in complete defiance of the Great Depression. For instance, hobo hops, where students wore raggedy clothing, added some innocent humor to the country's serious problem of unemployment.[1] Other activities, such as, plays, banquets, dances, gatherings, etc., allowed students to forget about the grim reality that was gripping the nation.

In this aspect, the history of Ursinus College in the 1930s can be very puzzling. For as troubled as the school was financially, it hardly showed in the social lives of the students attending there. The frequency with which leisurely activities took place on campus would make one think that Ursinus had never left the Roaring Twenties. So much so was this the case, that author Calvin D. Yost, in his Ursinus College: A History of its First Hundred Years, could not help but mention, alongside his claims that Ursinus had amassed immense debt, that the Great Depression "did not affect the daily round in the classroom and on campus or the spirit of the College community as much as, in retrospect, it would seem likely to have done."[2]

And yet the effect of the Great Depression did eventually make its mark on the lives of Ursinus students. By 1932, students began to complain about the prices charged at events on campus. Documented incidents of this involved student efforts aimed at lowering the prices of parties, dances, and football games.[3] Soon enough, parties were advertising themselves in the Ursinus Weekly as “inexpensive.”[4] The efforts of clubs and organizations that were working to lower the prices of their events were regularly reported in the Weekly.[5] Continuing this theme of cost saving, the school’s female students began to dress more casually for dances and parties, removing the corsage from their attire, due to the item’s expensiveness.[6]

Meanwhile, enrollment at Ursinus remained relatively intact, largely thanks to President Omwake’s and the school’s aggressive acceptance policy.[7] It soon became the case that if you could pay your tuition with little to no help from the school, you’d be accepted by Ursinus College.[8] Yost even commented in his book, that rarely an application was rejected by Ursinus administrators, showing how vital student income was for Ursinus.[9] As such, the student body of Ursinus never dipped below 450 students between 1930 and 1936. In the long run these efforts, though for the most part financially driven, would help Ursinus’ campus retain the closest thing to normalcy a school could hope to have during the Great Depression, in regards to its students’ social lives.