Politics on Campus during the 1920s

The conclusion of World War I ushered in a new era of prosperity unlike the United States had seen before. Credit created near unlimited purchasing power for the average American citizen, allowing them to make big item purchases they hadn’t been able to make in the past, while Jazz pushed the boundaries of the musical world. Women were donning the attire and behavior of Flappers, expressing their freedom in an unprecedented manner. All these changes were taking place were taking around the campus of Ursinus, and yet when it came to the political identity of the school’s student body, not much changed. The majority of students remained conservative, voting for Republican candidate Herbert Hoover in a straw ballot for the presidential election of 1928.[1] They chose Hoover, and his emphasis on a return to normalcy, over Alfred E. Smith, the Democratic candidate. Students predicted a landslide Hoover victory. Throughout the presidential election, Ursinus hosted various political guest speakers, as well as a numerous rallies. At these rallies, members and representatives of the Republican, Democratic, and Socialist parties talked on behalf of their candidates. Ursinus’ students were becoming more involved in the political process.[2]

A definitive political issue of 1920s was the question of whether or not Prohibition should be continued into the third decade of the 20th century. The 18th Amendment had been ratified by Congress on January 15th, 1920. The separate Volstead Act enacted a nationwide ban on the sale, manufacturing, and transporting of intoxicating beverages. The movement for prohibition had been strong in the early 1900s, but as the country neared the 1930s, the consensus of the American people was no longer as supportive as it had been of prohibition earlier in the ‘20s.  Being a politically conscient school, Ursinus conducted a vote on the the Prohibition question in 1926. The results of the vote went as follows: out of 163 votes cast 71 were in favor of the continuation of Prohibition; 38 were in favor of the repeal of the amendment; 54 were in favor of modifying the conditions of prohibition for the allotment of light wines and beers.[3] Whereas the voting results of similar experiments conducted by Connecticut Wesleyan University, Carnegie Institute President Harden Church, and Columbia University pointed in favor of the repealing of the 18th Amendment, the vote at Ursinus pointed in favor of maintaining prohibition, a testament of just how conservative the students attending the school were, even for their time.[4] Prohibition continued to be a rather hot topic at Ursinus College until the amendment was finally repealed by Congress on December 5th, 1933.

Another political issue that was discussed by the student body of Ursinus was that of the League of Nations.[5] The question of whether or not the United States should join the league, as had been originally envisioned by President Woodrow Wilson. Many students at Ursinus admired the goals of the collective security offered by the League of Nations, but remained convinced that sticking to an isolationist agenda was in the country’s best interest.

During this time, the Ursinus Weekly tried to raise student awareness for the agenda of the Permanent Court of International Justice, or World Court, which aimed at the establishment of global peace.[6]

The conclusion of the Roaring Twenties would see the political identity of the student body of Ursinus COllege remain conservative, but the interest of students in international politics had been peaked. This trend would continue in the ‘30s, as Hitler fascinated Ursinus students with his dictatorship in Germany. That said, following the Roaring Twenties, the political identity of Ursinus would become more and more diverse, as a substantial minority of students would go on to abandon conservatism in favor of liberalism and socialism in response to the Great Depression. 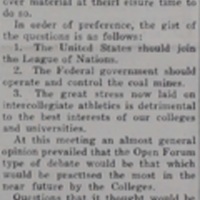 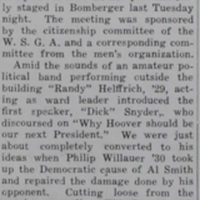 The non-partisan politicla rally was sponsered by the citizenship commitee of W.S.G.A. The rally's atmosphere was filled the music of political bands. Student speeches supported the political party that they advocated. The speeches were desinged to convince the listeners to join the speakers political party. 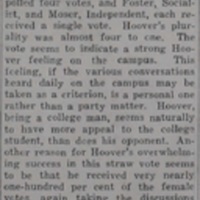 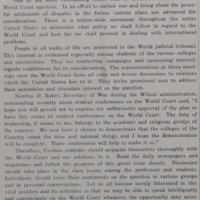 The article inside the Ursinus Weekly newspaper is written to bring awareness of the goals of Permanent Court of International Justice or World Court. The World Courts agenda was to estabolish world peace. 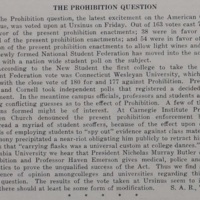 Ursinus college held a vote for students reguarding, if prhibition should continue or the 18th amendment should be repealed. The majority of the student body of Ursinus were in favor of prohibition. This view of prohibition showed the new conservative approach to politics of the Ursinus student body. 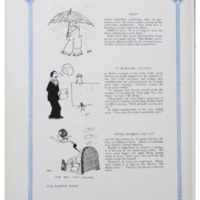 This article shows a political cartoon discussing the issues with prohibition and what would happen if it continued into the 1930s.