Ursinus Social Life in the 60s 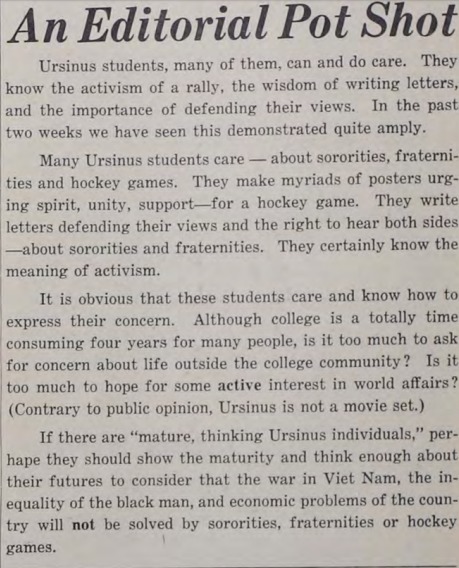 What was campus life like when the Curtain Club changed to Protheatre, thirty years after the Curtain Club's founding? The '60s were a radical time, and Ursinus student theater occurred against this backdrop of questioning and change. Looking at the broader climate of '60s protests and the specifics of Ursinus in 1968, change in Ursinus social life informed the Curtain Club's change.

1960s protests commonly included student activism at higher education across the United States. Both the counterculture of the 1950s Beat generation and the legacy of 1930s radicalism, such as the Communist Party USA, drove student activism in the 1960s. Like the Beats, students found themselves alienated from conformist Cold Ware mores; like the '30s radicals, students wanted to make their world more just (Gutek 220-221). Students nationwide joined organizations like the Student Nonviolent Coordinating Committee (SNCC) to protest racial inequality, and Students for a Democratic Society to urge participatory democracy (Gutek 225-226). 1968 in particular was a year of student activism. Martin Luther King's assassination invigorated student activists against racial oppression, and after the Tet Offensive in the Vietnam War, many students joined presidential candidate Eugene "Clean Gene" McCarthy in pushing for peace in Vietnam (Gutek 235-236). Students activism in the '60s pursued goals as seemingly-disparate as ending war and defeating racism, and those goals often involved structural reorganization on the part of students.

Social life at Ursinus saw an increased progressive drive informed by similar activist trends. While Ursinus did not host a SNCC or SDS chapter, Ursinus Weekly content from 1968 demonstrates student activism. A November 14th, 1968 Ursinus Weekly editorial provides a telling condemnation: “If there are ‘mature, thinking Ursinus individuals,’ perhaps they should show the maturity and think enough about their futures to consider that the war in Viet Nam, the inequality of the black man, and economic problems of the country will not be solved by sororities, fraternities or hockey games” (Schneider 2). While some "mature, thinking Ursinus individuals" may have been apparently wrapped up in Greek life and sports, this editorial evidences that other Ursinus students were concerned with the Vietnam War, the systematic oppression of Black people, and "economic problems of the country." Indeed, just two weeks before, the Ursinus Weekly had published a op-ed titled "The Grape Conspiracy" urging students to join in a national boycott of grapes to protest the cruel conditions under which Mexican-Americans were coerced to pick grapes (Jackson 2). Ursinus students worked toward a more just world.

Similarly, social life at Ursinus was increasingly diverse, as 1968 Ursinus Weekly articles also demonstrate. The Weekly noted that a Black woman was considering Ursinus for the Class of 1972 (Richtmyre 3). While it would take until 1973 for a Black woman to graduate Ursinus, as shown by Diversity of Social Life at Ursinus College in "The First Women of Color at Ursinus" at this link, the Ursinus student body was increasingly diverse in 1968. Indeed, the Class of 1972 was much more diverse than Ursinus' first classes in 1869-1879--containing three foreign students and, at 133 women to nearly 144 men, close gender balance (Weaver 1). Racial diversity in particular was a priority for students, as Richtmyre's piece for the Weekly and a later piece discussing the Black Alliance--a Black student group at Ursinus seeking recognition and increased enrollment of Black students--evidence (Richtmyre 3; Turnage 7). Much like today, social life at Ursinus had a long way to go in terms of diversity, but Ursinus' own increasing diversity drove the institution to become more diverse. Between Ursinus students' progressivism and diversity, campus social life set the stage for the Curtain Club's change to Protheatre.  

← The Curtain Club: A Small Backstory
From Curtain Club to ProTheatre: Why the Name Change Matters →
Ursinus Social Life in the 60s