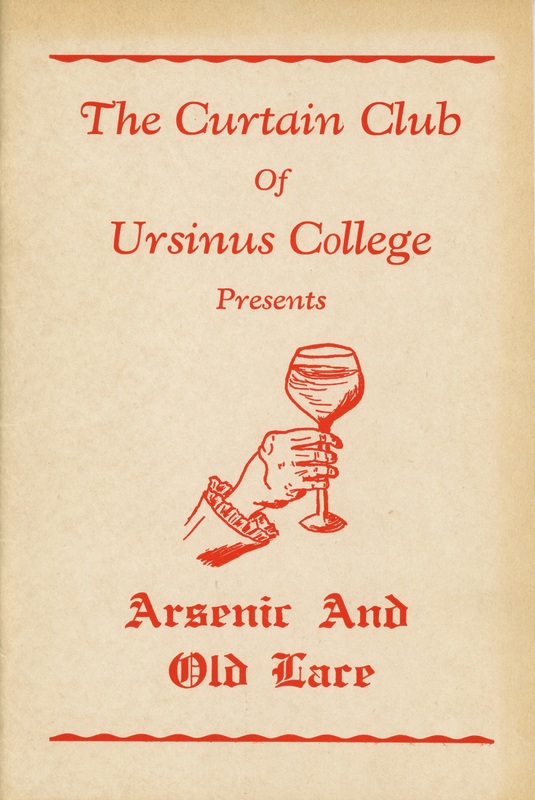 Cover of playbill for the Ursinus Curtain Club's production of Arsenic and Old Lace in 1951. 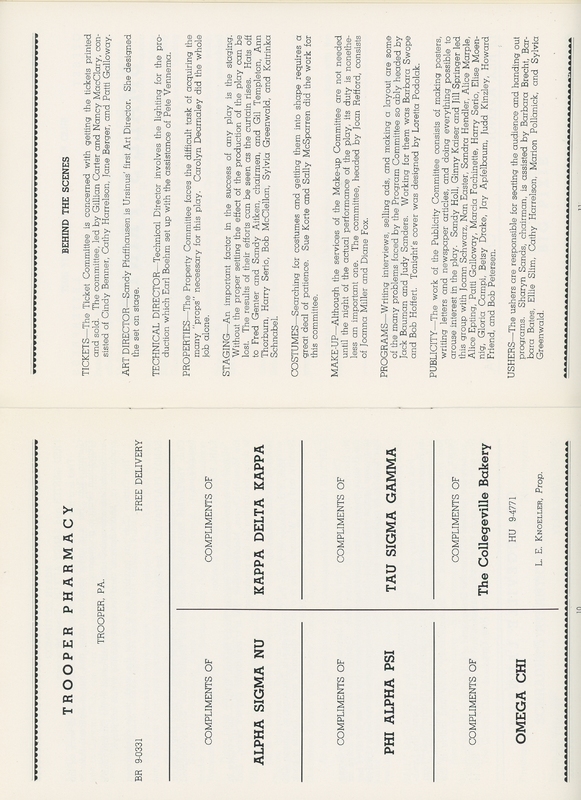 Curtain Club playbill from the production of Bell, Book, and Candle at Ursinus College during May 6th and May 7th of 1960. Pages 10 and 11, which shows compliment advertisements and staff descriptions. 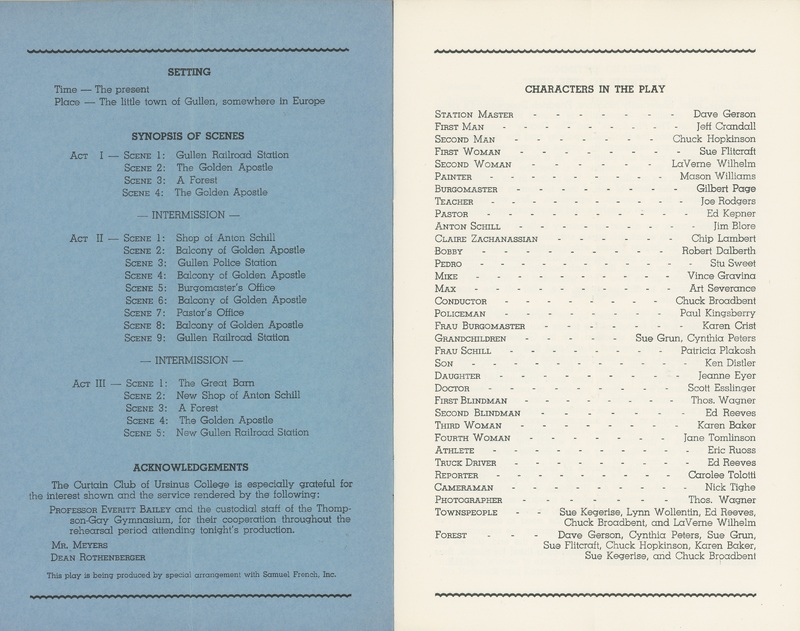 The transitioning of the student body itself is incredibly crucial in understanding transitions within the student-run Curtain Club. One interesting aspect of analyzing the multiple existing playbills from Curtain Club productions was the constantly changing nature of the staff itself as well as the way it was presented through playbills. Multiple subtle but important variables of the playbills speak greatly on the dynamic nature of the Curtain Club as an organization, subject to the same fluctuations of social and cultural character that define transitioning generations of students.

The student body composing the body of the Curtain Club exhibited nuances regardless of year or generation. Across the existence of the club, the demographic represented a variable populations of majors and extracurricular that define stereotypical assumptions of theatrically inclined students. Playbills such as All My Sons and Arsenic and Old Lace maintain a moderately sized list of students enrolled in majors from the sciences to humanities, and who also belonged to a significant portion of extracurricular clubs and activities; most notably sororities and fraternities.

Well throughout the early to mid-sixties playbills local organizations such as Omega Chi and Sigma Rho Lambda appeared frequently in student descriptions, and many more organizations became frequently featured in the special mention sections dedicating their support to the club’s productions. Most specifically during the mid to later sixties playbills there is a notable correlation of “advertising” support (for example, space purchased for dedications) and tangible sister/brother participation in the production. Such can be seen in the pages of the production Bell, Book, and Candle. Though this makes sense in comradery between organization and their members, it presents and interesting commentary on general organizational support of the school’s arts programs and clubs.

Natural progression came in the form of increasing presence and numbers of the club as well. Throughout the clubs changing of students, a significant presence of academic honors societies defines many of the student’s descriptions, along with the general number of students participating in the Curtain Club itself increasing. As early as the 1951 production of Arsenic and Old Lace the club was approximately 131 members strong and divided itself into 4 separate factions in order to cover various productions. As the club progressed, this population of “well-rounded” students became more focused on humanity-specific majors and extracurricular activities. This was by no means the case for every student, but The Starting Match playbill from 1963 indicates a transitioned to a humanities-dominated membership base that comes as the club prepared for more experimental changes to productions and theatrical management.

A notable change in the transitioning in the club is also made apparent in the playbills; formatting and style. A great deal of changes can be attributed to the magnitude of the play differing between seasons, but a significant trend difference is the attention to student descriptions. While the information in these descriptions has previously shown very important contextual details, the style in which these descriptions notably changes throughout the existence of the club. For example, earlier 50s playbills featured extensive descriptions and images of the students acting in the play, with a few even with separate senior pages in celebration of their final year. For the playbills in the late 60s and early 70s, some productions such as The Visit had simple listings of name and character without any description. Along with this, student representation and leadership positions began to become a much larger proportion than that of Ursinus Staff. A greater question stems from the shift of attention and increase in student representation; did the priorities of the club in its modernization shift to bring greater attention to the messages of the play?

← From Curtain Club to ProTheatre: Why the Name Change Matters
Does the Curtain Really Close? →
Curtain Club Staffing and Personnel