The Curtain Club: A Small Backstory 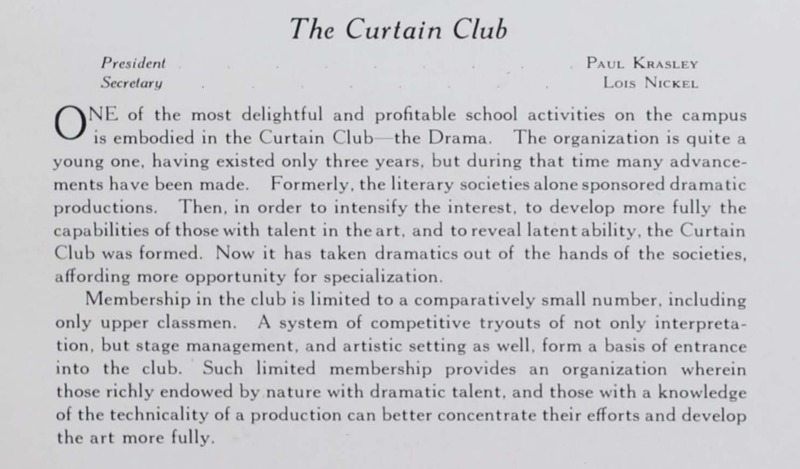 1928 Ruby yearbook description of the Curtain Club, stating its founding in 1925.

The Curtain Club indefinitely began in 1930, but the 1928 Ruby yearbook points toward 1925 as its actual establishment date. The Curtain Club was Ursinus' first theatre organization founded by an unknown source, probably a student or group that had interest in pursuing theatre further. Students may have wanted to be a part of the "glamorous life of stardom" the Roaring Twenties offered is not inconceivable. Even the Junior class and campus literary societies participated in performances.

Before World War I, it was an Ursinus tradition to have the Junior class deliver a performance to the campus, which would end up becoming the second dramatic production each year since Ursinus offered two productions every year. Theater grew especially popular with the 1904 arrival of Dr. Homer Smith, who specialized in Elizabethan drama, and "the encouragement of the townspeople" (Yost 90). The Zwingli and Schaff Literary Societies enjoyed theatrical rivalries. In order to prove their own prowess with the spirit of theatre and performance, they held separate productions; Schaff was noted for presenting plays like "Richard III in 1913, The Lady of Lyons in 1915, Ruy Blas in 1916, and The Dead Heart in 1917" (112). The realm of dramatics entered Ursinus with friendly competition, but the emphasis and want of the performing arts grew, causing the hiring of Gilbert A. Deitz (Class of 1918) as a dramatic coach for students (112). Comedy and satire were the main themes of each Junior Play performance and some local and Ursinus writers had skits performed by these houses and students. The thematic shift of the Main Street houses took place around 1920 when Schaff began focusing on more romantic pieces such as If I Were King and Sherwood (112). With the balance between comedic and romantic works, the student body developed more appreciation for theatre, both in participating in productions and watching them, and the student population started to increase along with President Omwake's influence on the Ursinus campus.

The 1920s at Ursinus saw the growth of the female population and the creation of numerous performative clubs, which were all established under President Omwake. He reigned over Ursinus from 1912 until 1936, and during this time, the Ursinus School of Music founded the Men's Glee Club, the Women's Glee Club, the Men's Quartette, the Women's Quartette, and also the Handel Choral Society around 1917. Piano lessons and instrumental courses began being offered as well (Yost 115). The student body grew, and by 1924, male students totaled at 154 and women at 119. Eventually, this rise in female admissions and acceptances called for a distinct Women's Club of Ursinus to emerge, led by Dr. Elizabeth Brett White in 1924 (Yost 112). The arts blossomed at Ursinus, and both men and women were eager to participate, which was also a cause of the various entertainments Ursinus presented to students. Concerts were held to keep students occupied on the weekend since most of them remained on campus for most of the school year's duration (115). As appreciation for school activities and the arts rose, the Curtain Club's indefinite origin was established in 1925.

The Curtain Club was not mentioned in Ruby yearbooks or Ursinus Weeklys until 1928, so the probability of the club being an experimental organization in 1925 is reasonable to deduce. It could have been a small movement that grew into an actual organization to be considered and recognized by the college. The initial start of the Curtain Club was tricky and unclear. Theatrical performances at Ursinus were sponsored and funded by "literary societies," the popularity of theatre on campus was impressive but not large enough to create a distinct group to represent it. Once the Curtain Club appeared, however, more students were drawn to the idea of a student-run theatre organization, and despite its small start, the requirements to become a member were daunting, to say the least. 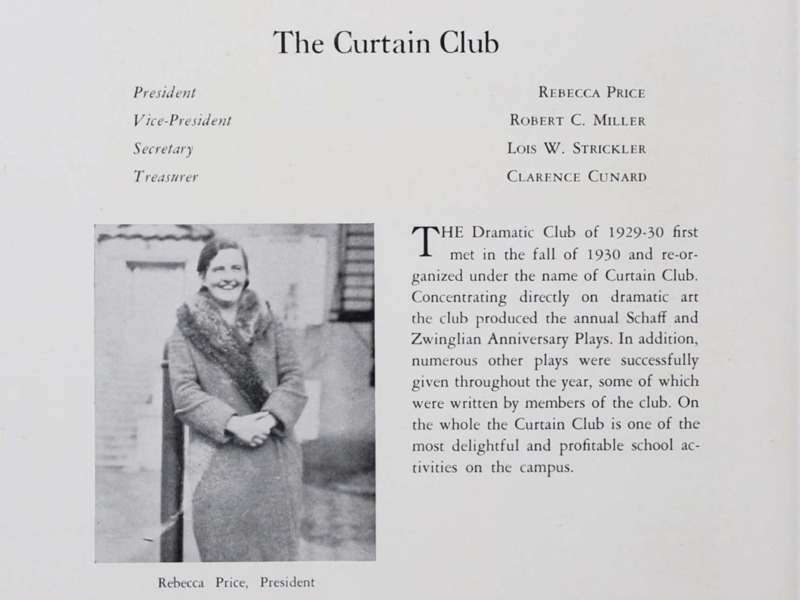 In the 1928 Ruby, it states how Curtain Club membership was "limited," and required "tryouts of not the only interpretation, but stage management, and artistic setting as well" (1928 Ruby 165). Despite the small size, it was a selective organization, but this could be due to the newness of the club, and in order to expand its popularity and legitimacy, they needed to have a dedicated group of people knowledgeable in theatre. No evidence was revealed of the club's existence during 1929, but in 1930, it reappeared in the Ruby. From 1930 into the 60s, the Curtain Club developed as an organization; however, with the political and social climates changing, there was a need to respond. This is when the Curtain Club realized it needed to transition into another phase of theatre.

← Playbills
Ursinus Social Life in the 60s →
The Curtain Club: A Small Backstory