Negative Effects of the Digital Age

With every good positive advancement, there comes a series of negative consequences or results. Computers are no exception. Technology has brought a significant change to the course of education and to students' way of life. Social media, for example, may have created a new and faster way of communication and connection with peers, professors, and job opportunities; it also caused self-esteem in one's self to drop, privacy to be invaded, and unwarranted tracked locations being shared publicly. 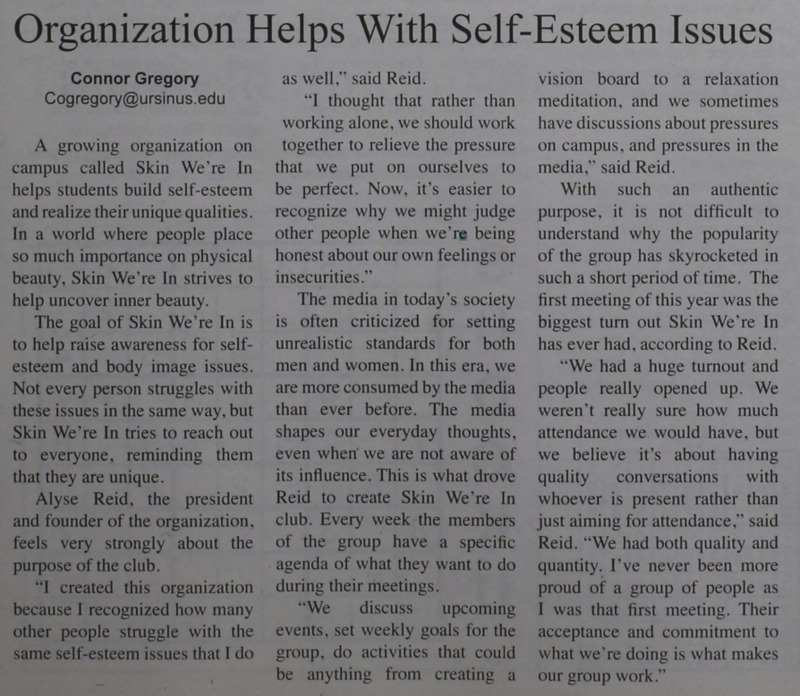 The birth of social media also birthed a new take on beauty standards and expectations set for women. As a result, women of all ages, body forms, races, and disabilities, suffer from the effects of the perfect social media body imagery. It was not long before adolescents, and young adults advocated for a more accepting community to combat this imagery. At Ursinus College, a small club organization in 2011 has done just that.

Skin We're In was a growing organization on campus by the fall of 2011. Its goal was to help raise awareness for self-esteem and body issues, wanting to reach out to all individuals to remind them that they are unique (1). The club founder, Alyse Reid, founded the club because of the toxic influence social media had on her peers as well as herself. Every week, the club got together with a specific agenda that ranged from discussing upcoming events, setting weekly goals, hosting mediation sessions, and discussing image pressures on campus and on social media (2). The club has a positive influence on campus. It was not surprising to see students come together and discuss their insecurities with like-minded people. This was a connection created by social media, but the adverse effects caused students to come together as a community. 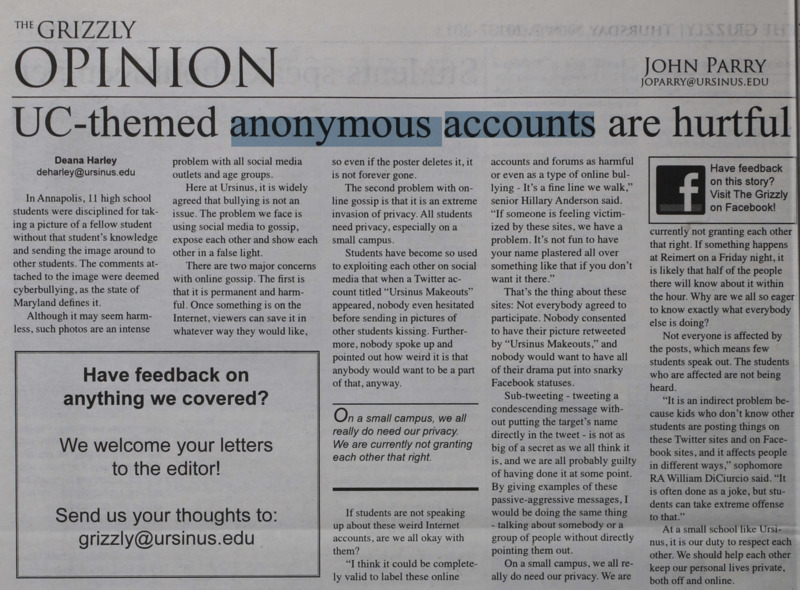 If it is not body image that college students of Ursinus have to be aware it, it is anonymous accounts sharing pictures without consent and cyberbullying. In 2013, an opinion piece was shared in The Grizzly written by Deana Harley. In this piece, Harley argues that using Ursinus-themed anonymous accounts to gossip and show fellow peers in a false light is harmful and hurtful (3). She expresses two major concerns, online gossip and the invasion of privacy. Online gossip is permanent and harmful; once it is on the Internet, it can be reposted, shared, and saved. It will never be gone forever once deleted. With online gossip comes the invasion of privacy with unsolicited pictures being shared (4). For example, an anonymous Facebook account was created to share and tease couples who were caught kissing around campus. Aptly titled "Ursinus Makeouts," couples would find themself on this account with snarky comments placed below each picture. Harley notes that none of the exposed students consented to have their pictures taken, and it is disrespectful to share such imagery on a small campus where everyone knows everybody.

We can see the uses of anonymous accounts with the usage of the app Yik Yak across campus today. With identities hidden, students have been known to use the full names of students they are targeting with harsh comments and sexually explicit jokes. It is similar to "Ursinus Makeout," where it encourages bullying and the invasion of privacy behind the screen of a computer or a smartphone. Harley ends with a statement that we need to be reminded of today, "at a small school like Ursinus, it is our duty to respect each other. We should help each other keep our personal lives private, both off and online" (5). 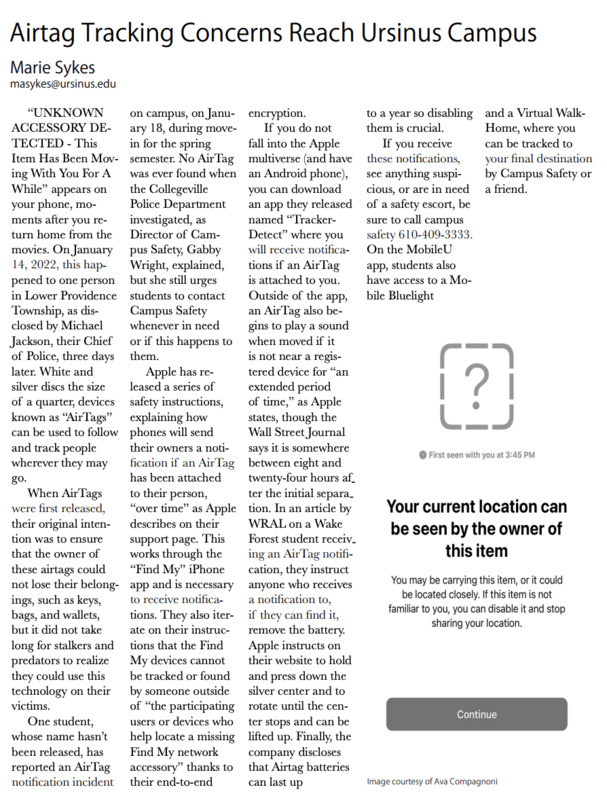 Finally, in our current technological advances today, tracking items such as your purse or your set of car keys can be made easy with the creation of the Apple Airtag. With a simple keychain, you can find misplaced or lost items straight from your iPhone. However, current incidents around and on Ursinus campus show that it is not just personal items that can be tracked. As of January 18, 2022, an Ursinus student reported that they received a notification that someone's Airtag was on their person and monitoring their location. This has raised anxiety levels across campus and also the sense of violation. In her Grizzly article addressing the issue, Marie Sykes provides safety precautions you can take to prevent Airtag tracking. One precaution is downloading the app "Tracker-Detect," which will notify you if someone else's Airtag is on you (6).

Technology has a wide range of pros and cons. The individual determines whether or not they will use social media, computers, or even modern-day Airtags for the common good or their own selfish reasons.