The response letter's to John Ronning's initial letter on GALA.

Mike Evans gives critiques on the logical argumentation of several of the letters in response to John Ronning's letter.

Last week, the size of the Grizzly's opinions section was quite impressive. Regrettably, its lack of quality articles was equally so.

The previous Grizzly saw the appearanceof Mr. Ronning's highly controversial and exquisitely written piece on helping students who have, as yet, no well-defined sexual identity. The most recent issue brought the expected outpouring of student and faculty response. What offends me is not any opnion expressed, but that a wonderfully crafted letter could be answered with such embarrassing prattle.

Mr. Ronning's argument is carefully delineated: an opening, three supporting points and a closing; and parentheses surround a genuinely parenthetical thought. He also withholds truth; makes generalizations; surrounds opinion with fact, fostering confusion of the two; and makes some quite unpleasant implications. All of these are admirable, perfectly legal techniques designed to strengthen his letter's impact.

Virtually all of the responses, however, fail to live up to Ronning's standard. In their zeal to discredit Ronning's perceived understanding or improving upon the devices of his letter, Ms. Jones misses both the motivation for Ronning's harsh language and the multiple meanings of the word "liberal." Ms. Slyvester writes of his "explicit suggestion" (which I assume is akin to an "obvious subtlety") and then fails to recognize his generlizations as anything but a factual blanket statement. Mr. Yacoubian begins his article well enough, then proceeds to ruin it by calling Ronning sexually frustrated, a cliche as tired as the skipping, lisping gay. The self-incirminating little enigmas from Dr. Hess and Mr. Castells-Talens exhibit the same traits they suppose to condemn. The GALA Committee's letter was at times an entertaining read, but its smears, direct and indirect, were repetitive and simple. Dr. Dawley knows Ronning's purpose was to hurt. I'm sure he obtained this knowledge from Ronning himself. Even Ronning's supporters were dissapointing, condensing a potent five-line quesiton into a two-paragraph rehash of his original.

Finally, lest you think our campus writers beyond hope, I offer profuse hat-tippings to Dr. Margot Kelley. Her letter was shockingly out of place in its surroundings. It was perceptive and illuminating, employing and exposing some of those same devices I found so enjoyable in Ronning's work. I only wish she would offer a clinic in literary analysis. It's obvious that our campus could use the help. If we're going to dwell on a subject for weeks at a time, the least we could do is read our opponents' letters with care and take the time to create sound, colorful responses.

Humbly yours,
Mike Evans
Class of 1992 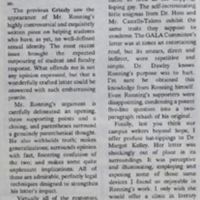