Shawn Glancy continues his letter from a previous page, arguing that we must presume that God may be working through GALA and that we must be as open to listening to them as we would want them to be of listening to us.

Editor's Note: This letter is the second part of a letter from Mr. Glancy printed on page 8. This part was submitted to us late in publication and therefore could not be run together with the other part. We apologize for the split.

Addendum to Letter to the Editor:

My letter is not in anyway an attempt to pass judgement on anyone on either side of the GALA issue. I strongly disagree with what GALA believes, but I don't think that by giving them money we are condoning their beliefs. There is a distinct possibility that all of us--especially those of us in the heteorsexual population--might actually learn something (what a concept, on a college campus!?!) from the speakers and events GALA sponsors. As a future servant of the U.C.C. Church, I believe personally that it is my God-given responsibility to be as willing to listen to GALA as much as I would want them to hear me if I had an issue of concern--and speakers or events are the best way to do this (this does cost money). I don't know how God works through organizations like GALA--but I'm not so closed minded to think He can't. I pray for all of us to have tolerance and be rational here--I hope we can all come out of this as more informed human beings! For me, even though I believe homosexuality is wrong, I can't in good conscience see the good in denying GALA money--it might only serve to build bridges of suspicion or resentment, and this is not a Christian way to handle anything! God help us all!

Thanks again,
Shawn Glancy
Class of 1992 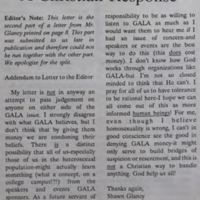