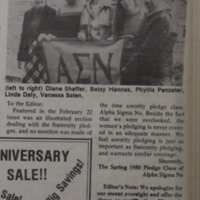 This letter by the sisters of Alpha Sigma Nu to the editor of the Grizzly expressed how they were upset because they feel that sorority pledging is not being properly covered in the Grizzly. 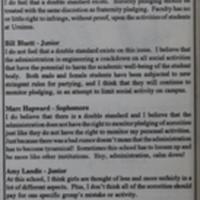 Students respond to whether or not there is a double standard with how sororities are treated by administration after sorority was caught performing illegal activities while fraternities did not have the same repercussions. 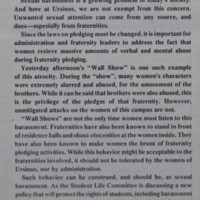 This editorial by a student argues that the Greek system promotes gender seperation and inequality. 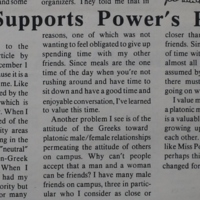 A Grizzly columnists agrees with the "Greeks Promote Sexism" editorial.

During administration's conflicts with fraternities over pledging policies, many students and sororities offered critiques of gender issues within Greek life.

When pledging controversies began in 1980, sorority members felt that the Grizzly coverage focused more on fraternities and overlooked sorority's pledging.[1] In 1993, students felt that less disciplinary action was taken against fraternities during pledging, which resulted in a double standard for sororities.[2] Students also wrote editorial pieces in the Grizzly in 1989, expressing their concern that Greek life inherently promotes gender segregation and sexism on campus.[3, 4]

Despite these criticisms of gender segregation and sexism in Greek life from the 1980s to 2000s, Ursinus' Greek life also saw the development of the first gender-inclusive Greek organizations during this time. 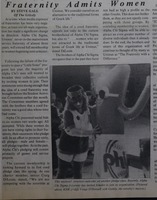 Alpha Chi Sigma, a fraternity that started in 1986, began admitting women in 1986 to become the first co-ed Greek organization on Urisnus' campus.

Photograph of the first year of the fraternity Alpha Chi Sigma in the 1987 Ruby. 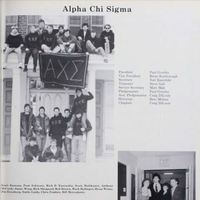 Photograph of the fraternity Alpha Chi Sigma in the 1988 Ruby. 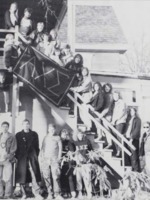 Photograph of Alpha Chi Sigma from the 1989 Ruby yearbook after admitting women into the organization. 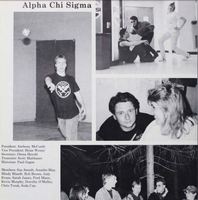 Photograph from the last year of Alpha Chi Sigma, now a co-ed fraternity, in the 1990 Ruby.

An article in the Grizzly in 1988 titled “Fraternity Admits Women” announced the first Greek organization to become co-ed, Alpha Chi Sigma.[5] The Ruby yearbooks show that the original all-male fraternity began at Ursinus in 1986 [6], and after just two years began to admit women in 1988. After much negative media coverage regarding administrations’ conflict with pledging and Greek life throughout the 1980s, this article declared: “at least one all-male organization has made a significant change in direction. Alpha Chi Sigma, Ursinus’ never-in-the-mainstream service fraternity of almost three years, will extend full membership to women beginning next semester."

The article reports that the men of Alpha Chi got approval from the Student Activities Committee to become co-ed, and they presented 6 bids to women and all accepted. One Alpha Chi member, Craig DiLouie was quoted to specify that the fraternity was not trying to compete with sororities, but rather wanted to provide “an alternative to the traditional forms of Greek life.” In admitting women, the fraternity wanted to increase its amount of diverse individuals and be thought of as “The Fraternity with a Difference” at Ursinus.[5]

Alpha Chi Sigma’s yearbook photos from 1989 to 1990 show that the organization had about ⅓ female membership.[7] Though they maintained this proportion of male and female members, the size of the organization decreased from about 30 in 1989 to about 15 in 1990. Alpha Chi’s last year present in the yearbook was 1990, though their reasons for losing their charter are unclear.[8] Despite its large numbers while on campus from 1986-90, the organization may have lost interest from the student body and was unable maintain its numbers after original members graduated. However, the organization’s short lifespan could also be more indicative of the difficulty of starting and building a new Greek organization on campus, rather than lack of student support or interest in a co-ed fraternity. 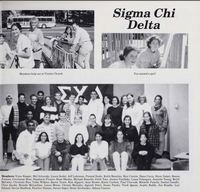 Photograph of the Sigma Chi Delta co-ed organization from the 1997 Ruby yearbook.

The last year of the co-ed organization Sigma Chi Delta in the 1999 Ruby.

After Alpha Chi Sigma ended in 1990, the next co-ed organization does not appear on campus until 1997 with Sigma Chi Delta. While this organization did not make any news in the Grizzly for being co-ed, the Ruby yearbook photos show that they had a large members when they came to campus in 1997 with 43 members and about equal male and female membership.[9] However, by 1999, the organization only appeared to have 5 members in their yearbook photo.[10] Similarly to Alpha Chi Sigma, Sigma Chi Delta may have struggled to continue beyond a few years at Ursinus due to difficulty beginning new organizations rather than student disinterest in gender inclusive Greek organizations.

The first year Delta Pi Sigma (founded 1949) was featured in the Ruby yearbook.

The Grizzly reports on Delta Pi Sigma becoming the first gender-neutral fraternity in 2014. Despite criticisms from alumni, most campus reactions to the news was positive.

Photograph of the Delta Pi Sigma gender-neutral fraternity in 2016.

Fifteen years after the end of Sigma Chi Delta, the next Greek organization to become gender-inclusive was the fraternity Delta Pi Sigma. Though the fraternity was all-male since it began on campus in 1949, they began admitting students of all gender identities in 2014. The Grizzly article reporting on their change to gender-neutral concludes that "It's unsure whether any organizations in the future will switch to gender-neutral, but Delta Pi is certainly revolutionizing the way Greek life functions, and trying to make people realize that organizations should not be based off of gender or sexuality, but rather based off of who a person is." [11]

A photograph of Alpha Delta Phi society, a coeducational Greek organization, in 2016. 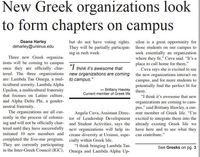 This article reports on the three new organizations attempting to form charters at Ursinus in 2015, including a multicultural sorority and fraternity and Alpha Delta Phi, a gender neutral society.

The second part of an article that reports on three new organizations attempting to form charters at Ursinus in 2015.

Will Greek life become gender inclusive at Ursinus and beyond?

The relatively recent addition of two gender-neutral Greek organizations indicates that Greek life may be moving toward a more gender-inclusive model in the future after a history of students and faculty critiques of Greek life promoting gender segregation. However, these recent gender neutral organizations are actually part of a longer history of organizations becoming gender inclusive since 1988.

Recently, discussions about whether or not Greek life can or will successfully become gender-neutral have been increasing in higher education beyond Ursinus. For instance, a fraternity at Harvard just became the first to transition to gender-neutral in spring 2017 [14]. However, another committee of faculty and administration at Harvard are currently calling for the elimination of fraternities and sororities due to gender exclusion. This article reports that even if some organizations become coeducational, "some of their practices are still counter to the university’s principles." [15]

Similarly, the debate on whether or not to dismantle Greek life or make it gender-inclusive continues at Ursinus. Most recently, Jordan Ostrum '17 won second place in the 2016 Richard T. Schellhase Essay Prize in Ethics for his paper, "Feminist Futures and Campus Changes: Dismantling Ursinus College's Greek Life," that argues for banning Greek life at Ursinus due to Greek life's history as a patriarchal and cissexist institution.[16]

If Greek organizations at Ursinus and other colleges and universities continue to become gender-neutral, these conversations and critiques of gender segregation versus gender inclusion will likely become more prominent in higher education and on Ursinus' campus.

[14] Julia Guilardi, "This Harvard fraternity will be the university's first to go 'gender-neutral'." April 6, 2017, https://www.boston.com/news/local-news/2017/04/06/this-harvard-fraternity-will-be-the-universitys-first-to-go-gender-neutral.