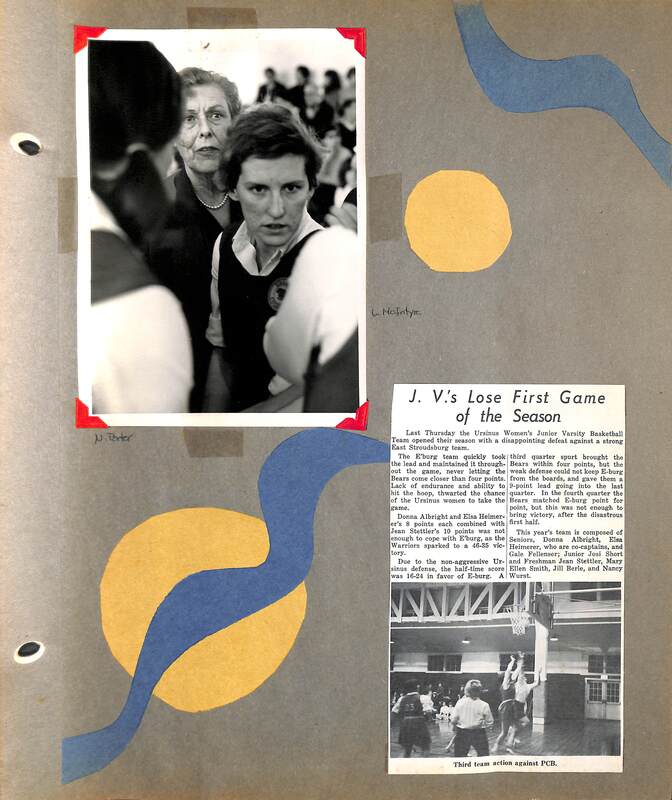 This is the one hundred fifth page of a scrapbook assembled and presented to Eleanor Snell by her student athletes on the occasion of Snell’s retirement testimonial dinner in May, 1970. 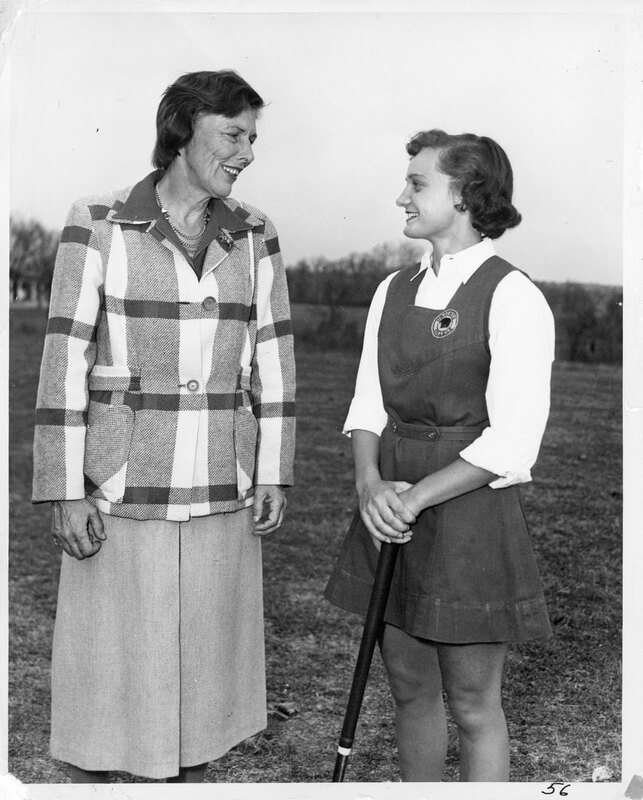 This is a photograph of Eleanor Snell with Marjorie Merrifield Loomis in the fall of 1953. 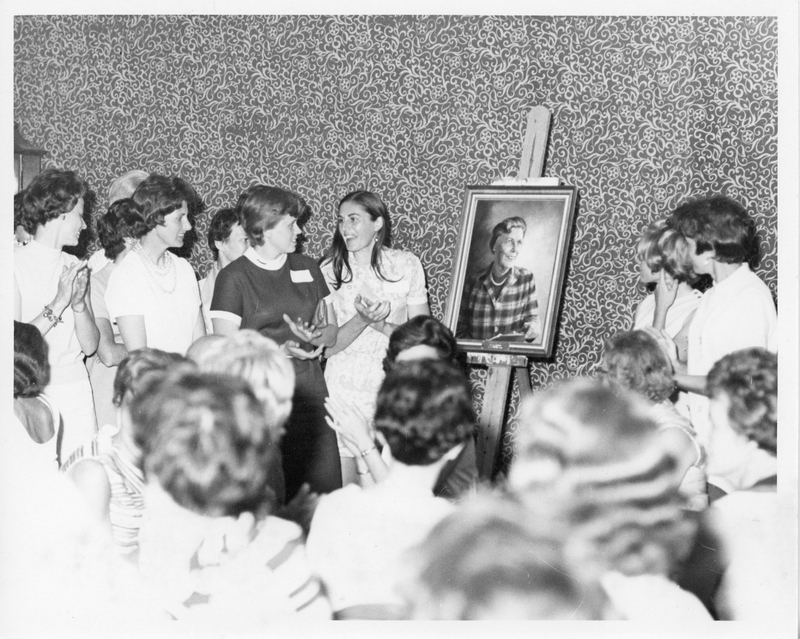 This photograph was taken at Eleanor Snell's testimonial dinner. Eleanor is being presented a portrait of herself.

Eleanor Snell did not let societal constraints hold her back; these restrictions were insufficient to stop her. Whether Eleanor stepped onto the turf, court, or field, she shined. At the University of Nebraska, Eleanor was captain for the basketball team. Additionally, Eleanor was on a winning soccer team and a successful hockey team; she was even asked to participate in the United States Field Hockey Association tournament. It is evident that Eleanor was a successful leader and strong player; however, it was when Eleanor attended Columbia University where she learned that she could become more than just an athlete. Eleanor said that attending Columbia University was the first time she discovered that she was expected to have opinions of her own and that they were welcomed [1]. According to Harriet Gould, author of, A Study of the Professional Life and Contributions of Miss Eleanor Frost Snell to Women's Physical Education and Athletics, at Columbia, Eleanor was inspired by the new ideas of leaders in physical education, health education, sports, and methodology [2]. These new theories and philosophies would “aid her in developing her own techniques and methods in both coaching and teaching” [3]. As an aspiring coach and teacher, Eleanor saw a job opening at a small liberal arts college in Collegeville, PA. Ursinus College hired her to fill a void, but what Ursinus College would soon find out is Eleanor did more than just fill a void. What Ursinus College got was a strong, independent woman who would have one of the most successful coaching careers, leaving a lifelong impact and legacy for fellow Ursinus coaches to follow.

Eleanor made her coaching debut coaching the women’s field hockey team. Her first year of coaching came with much success, only losing one game. Eleanor emphasized the importance of women participating in sports. She began initiating new regulations. Gould stated that Eleanor “desired to establish a system whereby varsity players would not be permitted to play on intramural teams, thus allowing fairer competition among the classes and giving non-varsity participants more opportunities to play in games” [4]. Eleanor also took on coaching the women’s basketball team. Since male sports were seen as more important and valuable at the time, Eleanor had limited time in the gymnasium; however, these limitations did not phase her. Eleanor’s practice regime, along with the talent of her players, gave her team the reputation of being one of the most “swiftest and most formidable” teams in the state [5]. Additionally, Eleanor also coached the tennis team, winning as many matches as they lost. Eleanor was able to balance coaching three teams, along with creating new innovations to improve athletics at Ursinus, making her first year quite memorable.

By the end of the thirties, Eleanor racked up 42 wins and only 17 losses for the field hockey team, 50 wins and 16 losses for the basketball team, and two undefeated records for the tennis team [6]. Gould noted that the Ruby gave credit to Eleanor and her assistant coach of the basketball team for “molding a combination that was adaptable to the new style of play” [7]. Eleanor’s success from coaching in the thirties, made Ursinus the ideal college to be for women who wanted to pursue a career in physical education. According to Gould, her influence helped generate the expansion of women participating in field hockey [8]. Eleanor ultimately wanted to inform women everywhere about athletics. During the Christmas holidays, Eleanor and her basketball team would hold special practices and scrimmages open to the public to serve as a “workshop in the new rules and regulations of basketball were interpreted and explained” [9]. Eleanor was very involved in athletics and wanted to encourage women everywhere to join.

As each year passed, Eleanor’s success continued to grow. The 1942 season could arguably be one of Eleanor’s most exciting years of coaching. The field hockey team was looking to go undefeated, but in order to do so, they needed to upset Temple and Swarthmore. Gould explained that no one expected Ursinus to beat Temple; however, being an underdog did not matter to Eleanor [10]. Ursinus ended up winning 3-1. Eleanor used this underdog mentality to motivate her players and evidently, it worked when they beat Swarthmore. The team went undefeated, including two ties, but Eleanor was looking for the team to accomplish their first true undefeated season. Of course, Eleanor was successful in her endeavors. Eleanor’s field hockey team ended up with a total of 55 wins, 15 losses, and 17 ties by the end of the forties [11]. It is also worth noting that the tennis team went undefeated for years during the forties, along with the basketball team only losing 17 games [12]. During the forties Eleanor picked up coaching softball and encouraged a number of girls to try out and be involved. It is not surprising to hear that soon after coaching, Eleanor and the softball team went undefeated for a number of years in the late forties [13].

The fifties was when Eleanor’s coaching ability was put to the test. She did not nearly have as many undefeated seasons as she did in comparison to the forties. All the teams she coached during the fifties experienced some upsetting losses; however, these losses did not define Eleanor’s coaching abilities. Eleanor still had many players who were rewarded for their success on and off the field. In fact, one of her players was the first girl at Ursinus to be selected for the All-American reserve team [14]. Although the fifties brought many challenges, Gould explained that part of the reason these challenges persisted was due to an increase in skill level and competition across women’s athletics [15]. Part of the increase, according to Gould, was initiated by Ursinus’s physical education graduates who became teachers and coaches [16]. They were able to produce talented athletes because they were influenced by Eleanor’s coaching techniques.

Eleanor’s techniques and strategies helped make her players achieve optimal performance. In 1960, the basketball team averaged 69 points-per-game [17]. Many people thought this score was too high, accusing Eleanor of lacking sportsmanship; however, Eleanor used many tactics, such as letting the bench-players play and switching her offense to defense to minimize the score [18]. On the softball field, Eleanor was very interactive. She made sure to grab a bat and hit the ball to every position, in order for every girl on the field to get experience [19]. Eleanor’s style of coaching also led the field hockey team to have numerous undefeated seasons in the sixties [20].

In Eleanor’s last two years of coaching field hockey, she managed to have back-to-back undefeated seasons [21]. During her final years, she was rewarded with numerous awards and credited for her success. More than 300 people showed up to Eleanor’s retirement dinner [22]. Many spoke about how influential and amazing she was. At the end of Eleanor’s career, she finished with an astounding record of 672 wins, 195 losses, and 42 ties [23].

With all of Eleanor’s achievements, it is safe to say that she has left a legacy and impacted many at Ursinus. Co-workers said that Eleanor is known for her “fairness, her steadfastness. and her willingness to give her best to the enterprise at hand” [24]. Additionally, students described her as “eager to win, but not at the cost of personal integrity” [25]. According to Gould, Eleanor emphasized the need for her players to have pride in their performances, the desire to play “well and fairly,” the will to win, and to lose “gracefully” [26]. Eleanor also said, "I do not think you can do well without good skills because you will be limited in your performance, but I think the most important single ingredient is desire” [27]. Different from most coaches, Eleanor did not prioritize methods and game skills first, rather she prioritized understanding the game and the players [28]. When asked about Eleanor’s presence, people could only say kind things. Eleanor would only be seen smiling and displaying a persona with the utmost confidence. Not many people are granted with the privilege of having such an influential coach like Eleanor, but Eleanor instilled a style of game changing coaching at Ursinus that can serve as a model for fellow coaches to follow.