Studnets and faculty offer their support for Mr. Ronning and one rebuke.

The subject of a GALA chapter on this campus has been the topic of much debate over the past few weeks. I would like to point out several of the many issues contained in this debate as well as express some of my own opinions on these issues as they relate to the Ursinus campus. The issues include: the issue of the appropriateness of the letter written by John Ronning printed in the October 12 issue of The Grizzly; the issue of the rights of a special interest group versus the rights of the campus; the issue of whether the recognition of GALA by the college is in the college's best interest; and finally the issue of whether the system of decision making within the institution of Ursinus College has allowed a democratic decision regarding GALA's charter.

The initiation of the heated debates was the letter by Mr. Ronning. Many of the objections to the letter did not concern his message but his vulgarity. Other concerns was its appropriateness for the newspaper and the question of whether a faculty member should become so vocally involved in such issues. I am sure that most would agree that vulgarity has been and still is acceptable in The Grizzly. One example of this is the horoscope column that most upper-classmen will remember as "Lucinda's column." I am also sure that the majority of the campus understand that freedom of the press allows anyone, including professors, to honestly express their feelings. Nobody has, to my knowledge, condemned Dr. Oboler for becoming involved.

Another issue involved is the larger scale interest of gay rights. I personally believe that homsoexuals have all the rights of heterosexuals. Many of the editorials in The Grizzly indicate that Mr. Ronning's statements have been interpreted as hate for homosexuals. I believe they are correct in detecting hate in his tone; however, I interpret this hate as a hate for the practices not for the people invovled. Furthermore, there is an equal or greater amount of hate found in the letter representing GALA. This letter calls Mr. Ronning a lunatic and states that anyone who fails to condemn him is using the "meager excuse" that he has a right to such an opinion. In this way GALA is denying people the right to be intolerant of certain special interest groups. Mr. Ronning was not attacking the rights of homosexuals. He was protecting the right of the people who would potentially be counseled by GALA to hear both sides giving them the ability to make an informed decision.

Another issue is that of whether GALA should have been recognized as a campus organization. This recognition involved the passing of their constitution by SAC, now called AFAC. This approval was given on Octboer 18, 1991, by a vote of six to two with one member abstaining and four members absent from the group. In my opinion, there are some legitimate objections to recognizing such a group. There is no doubt that this group has a right to go off campus to conduct their activities. However, Ursinus is a private school which has declared itself "related to the United Church of Christ" in the school catalog. The school does not have any obligation to sponsor a group that would contradict the morals on which the school was founded.

The last issue invovled is one that particularly stirkes me as important. This is the atmosphere of intimidation I have recently detected on this campus. As Margot Kelley stated, faculty and staff have a certain "undeserved credibility." The opinion section of The Grizzly is an appropriate form of expression for faculty and staff to express opinions. However, I believe that the classroom and other formal group meetings are not appropriate places for faculty to make statements of their beliefs unless the purpose is to stimulate thought or discussion. I have heard negative comments about Mr. Ronning in both of these situations. I have also heard more than one case of residents assistants who are afraid to voice their opinion on this issue as well as other issues because of what they think their supervisors might think or say. The environment is an intellectual one leading to independent decisions. I feel that the recent atmosphere on campus has not been promoting such individual decision making.

I am confident that in the future, issues such as these will be handled more civilly so that biases on campus will not prevent communiton of valuable opinions.

At the conclusion of their recent letter, the GALA executive committee urged readers to 'send a message to closed-minded, bigoted, extremist, fanatical, narrow, prejudiced, intolerant zealots on this campus and beyond." This fervent appeal was part of their retaliation for a letter from John Ronning in which he expressed disgust for certain filthy homosexual activities and questioned the value of GALA as an instrument for helping students resolve sexual identity problems. Moved by their appeal, I am offering the following as a message to them and the other "closed-minded etcetera" critics of John Ronning who directed their "vile diatribe" cf., anti-Ronning letter from Ron Hess) at him in the November 19 issue of the Grizzly.

1. I have known John Ronning for several years and I admire his honesty, courage, and professional competence. If "homophobe" is intended to denote somone who fears homosexuality or homosexuals, that term certainly cannot accurately be applied to him. On the other hand, the storm of hate filled epithets that fill the letters of his critics, cause me to wonder whether he has cared up a horde of "Ronnophobes."

2. Of course, John offered no "scientific reasoning" (cf. Ronnophobic letter from Dr. Margot Kelley) to prove that the activities described in his letter are disgusting. Science is an effort to understand the physical universe by constructing a logical analog that appeals to the human intellect. Moral principles transcned science and can't be derived from it. Of course, none of the Ronnophobic letters offered either scientific evidence that active homosexuality is a wholesome lifestyle nor a sequence of logical steps that lead from some aspect of the physical universe to the conclusion that those with homsoexual inclinations shouldn't seek help in overcoming them.

For thousands of years, we have had a written moral code to reinforce the code (natural law) built into us by our Creator. Those who accept that code as a reliable guide to moral behavior are, in my opinion, on the right rack.

3. Robert Dawley's letter implies that John's expression of revulsion for the disgusting activities of some homosexuals was an act of "cruelty" motivated by "hatred." John Ronning is honest, and sometimes blunt, but never hateful or cruel.

In their use of epithets such as "fundamentalist right-wink kooks." the authors of the Ronnophobic letters show a shameful acceptance of left-wing stereotyping of supporters of traditional Juedo-Christian morality. They seems to regard their own outrage as unassailibly righteous and their target as self-righteous. When they employ the term "diversity" in the context of an effort to intellectually intimidate somone with a different viewpoint, I am left with the distinct impression that the word is a euphemism for liberal academic and moral orthodoxy.

If Toni Castells-Talens' letter to The Grizzly (November 19) results in the creaton of a new student organizaiton HPH (Homophobic-Phobic Hetersexuals), I hereby offer my services as Faculty Advisor. 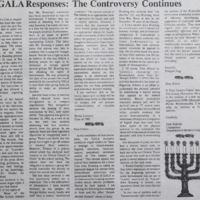