I thought I would take this opportunity to put an end to the discussion concerning homosexuality. As some of you already noted, this thread is tiresome and we have better things to think about at college like the new mall and what's on television.

Welcome to the miserable world
of the homosexual.

Meetings are once a week. The location changes so that there is not undue burden on one host to provide
the wine, cheese, and fresh cut flowers, although matching place settings can also be difficult. During the summer there is a barbecue. After singing show tunes, the oath is administered. Our facilitator, who looks remarkably like Judy Garland, calls the meeting to order.

Most of our time is spent discussing the homosexual agenda. Our recruiters present the latest figures.
Many of you don't realize that we must all devote one year to missionary work, a policy from we which
we are indebted to the Mormons. This is a relatively easy requirement satisfied by either hanging around schoolyards or the Barbra Streisand section of the local record store.

Lately we have been experimenting with various "reversion therapies." Our scientists have noted successes in this area. Impressionable teenagers are locked in a room and are forced to watch television. After twenty-four hours of near exclusive heterosexual representations
of adultery, violence, misogyny, and irresponsible sexual behavior, teens are susceptible to an alternative. For those recruits who stubbornly adhere to a Judeo-Christian value
system, a close reading of the Bible usually yields "morally" based prohibitions on eating pork (Leviticus
II :7), wearing clothes of more than one fabric (Leviticus 19: 19), wearing gold or pearls (I Timothy 2:9), not to mention divorce, which carries a penalty of stoning (Deuteronomy 22:22). The hypocrisy of selectively ignoring only those
rules considered anachronistic is not
lost on the plebes.

The meeting usually concludes with an induction ceremony. With your right hand on the International
Male catalog, one swears allegiance to Rock Hudson and pledges to have thousands of sex partners. In return
you are given the " lifestyle" card, which is good for discounts at most hairdressers and florists. I've been
told it can also be used for travel discounts. Tea is then served (herbal for the lesbians) and we discuss antiques.

I hope this puts an end to any lingering questions about our lifestyle. I forgot to mention that if anyone is interested in trying it out, there is an end of the year special discount for those who sign up before January I. It includes a free gym membership. 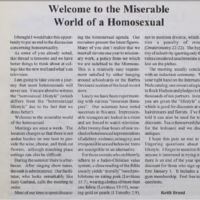