Outside Ursinus - Relevance of the Eras 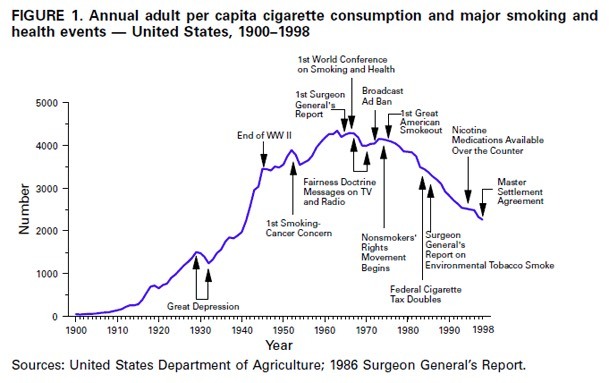 The question everyone, including us, must be wondering now is, why did this change happen? Why did these smoking advertisements disappear between the 1940's and 1980's? Why did American Cancer Society advertisements start appearing in the 80's? To find this answer, we need to look at this from the perspective of America - specifically it's laws/regulations for smoking and when these started changing.

We first found a graph that shows trends surrounding smoking not just on campus, but nationwide. After seeing Ursinus' smoking ads, the graph looks exactly as we expect. During the golden age of the cigarette ads, when big tobacco had doctors, athletes, and actors promote their product smoking, smoking was on the rise, becoming more popular than ever before. As time went on, however, the idea that smoking was bad began to circulate, and the amount of smokers all but plateaued. Then when we get to the 80's the American Cancer Society is in full "smoking causes cancer and kills you" mode, which causes a drastic drop off in the amount of smokers that there are.

Additionally in the pioneering 1914 study, W. Gilman Thompson observed that smoking in excess was bad (a fact that was before his time because no one believed him), while the occasional smoke was a good thing. A 1950 study said "more can be said on behalf of smoking as a form of escape from tension than against it." A 1954 public opinion poll revealed that 90% of the population had heard stories linking smoking to lung cancer, but another poll taken in 1962 discovered that only 32% of Americans believed in the correlation. It took until 1996 for the FDA to regulate cigarette sails to minors because they "serve as a drug delivery system".

Last of all, if we take a look at the 1970's and 1980's, we see certain changes occur in schools. Specifically between 1975 and 1984, associations started developing comprehensive smoking control programs within in an effort to prevent students from taking up the habit. The programs primarily focused on cessation education and creating supportive nonsmoking environments. This directly relates to what we see in the 1980's for Ursinus, as associations like the American Cancer Society started putting up ads to prevent people from smoking.

All of those studies and polls fall in line with the graph as well, the 1910 study that said smoking occationally was good, and the amount of cigarettes used per year was still low in that time period. Then, a 1950 study showed smoking is better than non-smoking, which again falls in line with the graph. Smoking is on the rise. The 1962 poll showed only 32 percent of Americans believed that smoking was bad, which coincided with the plateau of smoking because word of cigarettes causing cancer was beginning to spread. And lastly, the 1996 cigarette regulation continues the decline of cigarette usage, exactly as the graph shows.

All of this information shows that Ursinus College is strongly influenced by the rest of the world. Smoking advertisements have been a huge part of the college's culture, and even if it's shocking to hear about this today, it is important to remember what Ursinus was like in the 1940's and 1980's. We hope Bears Make Smoke has shed some light on a new part of Ursinus College in an enjoyable way. Thank you!

← Ursinus Today - The Empty Era
Outside Ursinus - Relevance of the Eras