Change and growth at Ursinus

If we stood back and looked at Ursinus College from an outsider's perspective, what would we see? Most of us would agree that, academically, Ursinus is a solid school, attracting a solid student body, but not quite in the prestigious liberal arts college category with Swarthmore or Haverford. Socially, most of us would like to see some changes but we might be stretching it to say Ursinus has a poor or below average social life in comparison to some "suitcase" colleges. A general conclusion might be that Ursinus is a pretty good college, let's keep it just as it is. "It it ain't broke, don't fix it."

Is "pretty good" good enough? There seems to be a general feeling in the student body that the status quo at Ursinus is good enough. While academically Ursinus has moved forward and continues to do so with the addition of newer, more modern buildings, building renovations, changes to a more writing intensive curriculum, and the addition of top faculty members. It is the social scene that concerns me.

If you think this is going to turn into a tirade against the Greek system, you are wrong. Ursinus has a quite healthy, thriving Greek system. It has without a doubt made the single greatest contribution to Ursinus' social life. But does that mean Ursinus' social life can't be improved? Can we all honestly saw [sic] we are satisfied with ursinus' social scene and not one thing should be changed?

Yet when one social change is proposed to try to unify this small campus into a "family like" atmosphere, transcending the cliques that I think 99% of us have critisized at one point in our college careers, these proposals are either supported in word but not deed, or roundly criticized. When a group is formed that's membership has resolved to express their true feelings about themselves and about the culture they represent, an admirable goal that takes much courage, some in the campus community still ask them to conform to what is supposedly "natural."

I would guess that most of us would like to see a more socially unified campus which keeps its traditional institutions yet also has a social life in which the entire student body can get involved, regardless of the letters or symbols worn. This has been the main thrust of the associate editor's writings in the past weeks, although some may have taken personal offense. And I think most of us would like to see Ursinus become a more diverse, socially conscious campus as seen in some of the letters to the editor not necessarily supporting GALA but supporting its right to exist.

In closing, let us all look at Ursinus College and think about what we would like it to be and what kind of school we would like to graduate from. Before we criticize ideas about change and growth, let us think about the positive good they may bring. If you think Ursinus is as good as it's going to get, then fine, be satisfied with the status quo. But if you do not, and I think most of you do not, then endeavor to make "pretty good" better. 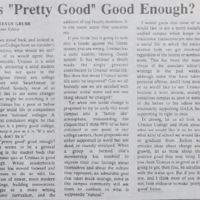