Todd Brenneman argues that Christianity condemns same-sex relationships and states that the Christian Bible's alleged position on sexuality presents the truth. He claims that "liberal" support of the LGBTQ community is a lie.

"You shall know the truth and
the truth shall set you free." Do you
know who said that? I f you know a
lin Ie about the Bible you probably
do. Evidently, given last week's
:;nz:ly, many people who wrote in
don't. For those people, I ask them
o read Leviticus 18:22, Romans
: 18-32, and I Corinthians 6:9-10.
fhese are just a few examples about
'he truth ofTHECHRJSTlAN view
)f homosexuality. Read it. Not
what was printed last week about
he BIble's view of homosexuality.
Which gives me a perfect segue
110 this week's anicle. It is on
truth If you listen to most liberals
or the liberal news media, I think
you're not g01l1g to get it. So where
are you going to get the truth? Well,
t"st, you can stan by reading m)
column. From there watch Rush
I mbaugh And from there, watch
C ·Span The comb1l1allon of all
these things (which includes the
n:"s media) WIll gIve you what I
\\ould consider the truth.
Folks, n IE TRUTII lOUT
IllERt (that's for you X-philcs). It
may take some 100k1l1g, but you
CJn' t rei) on onc source for the truth.
So, in order to get you staned,
I'm going to provide you with some
truths. This issomewhatsimilarto
Rush Limbaugh's 35 Undeniable
Truths. This is also a list of future
topics.
I. There is a GOD. (If you'd like
to debate, let me know)
2. Let me be perfectly clear:
MORALITY IS OT
DETERMINED BY INDIVIDUAL
CHOICE! (Relativism will get you
into a big heap of trouble.)
3. Homosexuality is a choice. Do
the reasearch. I have. I've read
Simon LeVay's work. I've read
Dean Husk's work. There is no
scie ntific evidence that
homosexualIty is caused by genes.
4. It IS okay to be right. By that I
mean conservative. It is okay to
believe 111 conservative principles
It Isokay to say there isa difference
between right and wrong. It is
okay to belIeve that people who do
well 111 this world should not be
pUl11shed. It IS good to stand up for
\\hat you believe in. Don't be
ashamed to stand up and say "This
IS wrong!" It IS lime to fight for
what we believe in . Folks, we
members of the Republican party
stand on the threshold of a ne\\ future.
Our ideals will make this counl1)
great. We will be a nation of
independents. No longer will the
government do what it wants. The
government will do what we want.
We will be a nation of people
depending on no one but ourselves.
We won't bea nation on welfare. We
will be a nation that fares well in
the twenty-first century.
5. If you steal, you're gUilty. If you
murder, you're guilty. Period. End
of story. Eric and Lyle Menendez
are guilty of murder. They SHOT
their parents. They RELOADED
and shot their parents again. One of
the first jurors said they felt sorry
because they don't have their parents
anymore. THEY SHOT THEIR
PARENTS, THEY'RE GUILTY.
6. Dr. agy has every right to write
what he dId. The anicle was poignant,
well thought, and accepted by many
on this campus. By calling his views
closed-m1l1ded, writers are making
hypocrites of themselves, because
they themselves are being c1osedminded
That is the first pan of the truths
according to Todd. More next week.
Keep your chill up; remember, we
are winning. See you next week.
[EDIT: clean up and format] 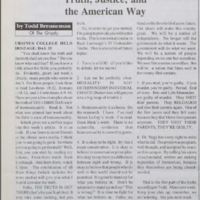