When reading different viewpoints
in The Grizzly, it becomes apparent
that the argument is not about sexual
preference, but rather morality. Each
of the viewpoints are based on a
moral 'wrong,' whether it be a different sexual preference or hate speech.
Therefore, the point is in determining
how these moral positions are drawn.

Morality deals with individual choice, therefore only aspects which are subject to human choice fall within their scope. To say that it is right or wrong to be pigmented
'white' or to be gendered 'womyn' would be ludicrous, because the individuals diplaying those characteristics have no means to control them. Under this light I question the view that states sexual preference differing from 'Judaeo-Christian' heterosexuality is morally 'wrong.'

Sexuality is a very complex topic, so I must define it in order to use it. I will define sexuality as an attraction
towards another individual which leads to a relationship being sexual in nature. This definition raises the question of whether or not 'Judaeo-Christian' heterosexuality
is chosen. Do heterosexuals choose members of the opposite sex as attractive? To state that heterosexuals do
choose their sexual preference would assert that heterosexuals find members of both genders sexually
attractive, but only choose partners that are not of their gender. Heterosexuals that I have spoken with state
that they are only sexually attracted to members of a different gender. If any heterosexual readers are sensually
attracted to members of their own gender I welcome your correction

Individuals that state that a certain sexual preference or a certain skin color is ' right ' or 'wrong' are mistaken. This is because ' wrongness' is a moral statement which is
given to aspects of individuals that can not be questioned by morality, namely aspects of one's self which do not involve choice. 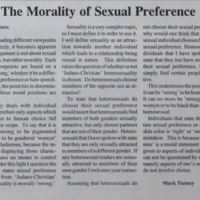