Christopher Phiel expresses his annoynace with the amount of attention GALA has received.

The last few issues of The Grizzly, notable October 30 and November 12, have been full of remarks on topics that have gone a long way in causing agitation among the students on campus. There have been eloquently written letters supporting the newly formed GALA organization. There has also been a faculty member telling of the "joys" of being homosexual in a rhetorical gay-bashing effort. The existence of this organization is not opposed by me. What is bothersome is the attention that it recieves. As with any organization on campus, interested will seek out the club and participate. Refrain from giving this club any more exposure than something such as the Angler's Club. It's difficult enough to eat in Wismer without reading about this club ad nauseam. Let's let GALA become a normal part of the Ursinus community.

The nausea surrounding GALA is only dwarfed by two of the articles by Mr. Woytek. First, he wrote an inconsequential editorial involving the seating arrangement in the cafeteria. Paper was actually used to print this harangue directed at the student body--unbelievable. It is human nature to continually sit in the same seat in the same surroundings. There are many classes I have been in where, although there were no seating charts, students sat in the same seat every class. This is why fraternities, sororities and sports teams dine together in the same areas. Also, at dinner, which is spread out over a longer period of time than lunch, members of the opposite sex often sit and talk with people in a forum that is not in "their territory." The mentioning that this type of arragement does not occur at other schools is simply an unfounded accusation. The last point on this loathsome topic is the terrible usage of the word "atrocity" in Mr. Woytek's editorial. If the way students congregate in the cafeteria is considered an atrocity, what stronger word can be used to describe a nefarious crime like rape? Save the dramatics--it only heightnes the amusement surrounding the topic.

The last issue that I would like to address is the November 12 article entitled "The Black Hole of Greek Life." The timing of this article is poor because the IFC is considering changing pledging or banning it altogether. To let this article go without response would be sending a message to the IFC that the Greek system is not good for the Ursinus community. This is certainly not the case. Everyone is entitled to their opinion, but it is wrong to treat this opinion like it is the prevailing thought throughout the campus. It comes down to a matter of choice. The people belong to the Greek system chose to pledge. Those people who did not pledge did so out of choice, too. To say one decision is better than another is simply wrong. The Greek system is fine as it is and is very willing to accommodate those students who are not Greek. This must be kept in mind by the IFC, that council headed by Dean Kane, who apparently gives the IFC the same credulity that Joe BIden gives to the Senate Judiciary Committee. To disband the Greek system would leave the social life at Ursinus in a shambles.

As as far as starting an all-swimmer fraternity, I wish you luck. Unlike the way Mr. Woytck feels, the fraternity would not "offend all the frats that currently exist," but limiting your fraternity to swimmers would surely be its downfall. It is diversity that keeps the Greek system alive, and for this reason, Ursinus should work hard to keep this system intact. 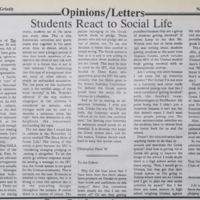