Various students offer support for, and condemnation of, Ronning's letter.

We are writing in support of John Ronning's letter in the November twelfth issues of the Grizzly concerning GALA. We believe that Mr. Ronning made an excellent point that students confused about their sexuality should not be counseled by people who are going to push them towards homosexuality. He makes a generous offer to put people confused about their sexuality in touch with a group offering another point of view.

The remarks he made concerning certain aspects of the homosexual lifestyle, while vulgar, may not hold true for all homosexuals; however, those riturals are indeed a part of the gay culture. Some of us have heard about these practices from people we know are homosexual. We know Mr. Ronning's letter outraged large numbers of the faculty, staff, and student body. [sic] some have personally attacked his character and others have questioned his employment here at Ursinus. If we are to be open minded about accepting homosexuals, why should we be disgusted by someone holding a different opinion?

It seems such a shame that a professor at a liberal arts college, whose patience and guidance should be focused on preparing young minds for the future, could be so ignorant and closed minded. Haven't we, as a culture, progressed to the point where people that are different can be acepted without question, critisism, or controversy?

Someone should delicately explain to Mr. Ronning that diversity among people has existed since the beginning of time. All people have their sexual preferences. Some, like myself, prefer heterosexuality, others homosexuality, others bisexuality. Still others practice bizarre forms of heterosexuality. Should heterosexuals who indulge in sodomy or "golden showers" also be ostracized for partaking in what they enjoy? Do you judge a man by his sexual preference? If your response Mr. Ronning is yes, then I am ashamed that you are a representative of the college that I attend.

Do you really expect, Mr. Ronning, that your tirade will prevent homosexual tendencies among a group that already prefers that type of sexuality? That was clearly the intention of your opinion. I do not believe for a single moment that you intended to "save" gays from future health problems by presenting them with another group that might talk them out of homosexuality. The intention of your verbal lashing was simply to embarrass and shame, not help. GALA was initiated to give homosexuals an outlet that could be found nowhere else. Its secrecy is vital simply to prevent protest by the uninformed and prying members of this campus. You took an organization, with which you had no concern, and rake it over the coals simply because your views are not in harmony with it. Mr. Ronning, the right to privacy is inherent to existence of all men. In the future, please try to work out your own sexual frustrations by not criticizing others whose happiness you obviously envy.

Letter to the Editor:

I'm upset about this whole GALA thing. I'm on the Student Activities Committee, (or as it is not called AFAC) so I had to vote on whether or not to pass the GALA constitution. After two special meetings and weeks of debate, constitution was passed. And I was one of the people who voted for this group. Once I had throught the whole thing through I couldn't find a good reason not to vote for GALA. I even took time out at a conference I went to, to go to educational sessions on homophobia I did this to sort out my personal feelings and to find out what other colleges are doing about this. Now, I'm not so sure I did the right thing.

This whole situation is becoming petty. While everyone is entitled to his/her opinion, the letters back and forth in the Grizzly are getting ridiculous! The GALA constitution has been passed both by SAC and the faculty. This campus has to accept that fact. When I voted "yes" for this group, I felt good. I thought this group could do some good at Ursinus. But all I've seen so far is petty articles in the Grizzly and slander to a newspaper staff member. In her Oct. 22 article, Melisa Miller wrote about the proposal of GALA and some students' reactions to this group. All of her information came from the SAC meeting that she was invited to. Melisa Miller's article was neither for nor against GALA, it was just to introduce the idea to the student population. It did just that! I have now read two articles in the Grizzly critisizing this article. One by Michael Cyr, a member of GALA, and the most recent one, by Dr. Regina Oboler, the faculty advisor to GALA. This really upsets me! Do something better with your time to help Ursinus instead of defending yourselves against imagined slander. You are disappointing me and I am a hetersexual who has some good ideas that could help you get your club started and involved on campus.

After reading your letter, I hope you do not call me mentally ill or perverted if I publicly declare myself "homophobic-phobic." 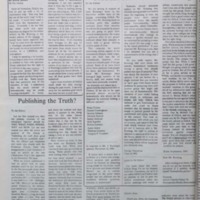