In memory of her late husband, Mrs. Charles Heber Clark donates $5,000 for Ursinus College to buy a pipe organ.

Donation of $5,000 for Memorial to Late Charles Heber Clark
On Thursday morning last, the professors and students of the college were given a great surprise when President G.L. Omwake made the announcement at the chapel service that Mrs. Elizabeth K. Clark of Conshohocken, Pa., had presented a check for $5,000 to the college. It is the donor's wish that this money be used in placing in the college auditorium a pipe organ as a memorial to her husband, the late Charles Heber Clark.
In speaking of this gift, President Omwake stated that the college would not only have this valuable addition to its equipment, a means of education especially desirable in an institution devoted to liberal culture, but that it will be to the everlasting honor of Ursinus to have in its very heart this handsome memorial to a man so distinguished as Mr. Clark.
In recognition of his learning and many accomplishments in the world of letters the college was pleased to confer upon him a few years ago the degree LL. D. Mr. Clark was a valuable member of the Advisory Council and always took an active interest in the administration and advancement of the college.
Throughout America and England, Charles Heber Clark was widely known as a novelist by the pseudonym of his earlier literary career, "Max Adeler." His most popular writings are, "Out of the Hurly Burly," "Captain Bluitt," "In Happy Hollow," and "The Quakeress." He was connected with journalism since 1865 and later became owner of an industrial journal in Philadelphia. For ten years he was secretary of the Manufacturer's Club, Philadelphia, and edited the Manufacturer, the official organ of the club. He was a recognized authority on the subject of economics. 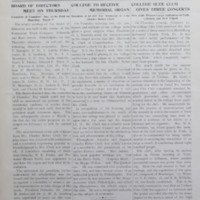 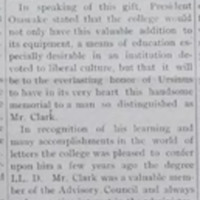