Article that explains the deep history of Ursinus College, including the how Ursinus obtained Freeland Hall (what is known today as Myrin Library) and built Bomberger Hall.

If these walls could talk, what tales would they tell? As one of the oldest buildings on campus, Bomberger Hall holds a special place in Ursinus history, and therefore the renovation it will soon undergo is that of a campus treasure.

There were (and are) older buildings in the college's history. Freeland Hall, where Myrin Library now stands, was the original college building. To the west, on Pfahler's site, was the first Olevian Hall, an old Victorian farmhouse that became a women's dormitory. And of course a number of the houses on Main Street that the college has acquired and used over the years are older than Bomberger. What makes Bomberger special is that it was the first structure built expressly for Ursinus College.
Freeland Hall, built in 1848, had been the home of an academy, the Freeland Seminary, and the Ursinus Board of Directors acquired it at the time of college's founding in 1869. For several decades, it sufficed despite its lack of central heating or indoor plumbing! Everything - sleep, meals, study, worship, and classes - took place under its roof. As the college's enrollment grew, however, Freeland Hall began to feel cramped. Only some of the students boarded, so it was not so much a lack of beds or places in the dining hall, but after a couple of decades the building could no longer comfortably accommodate student activities or assemblies of the whole student body. The students hankered for a gym in particular, but the Board of Directors knew more was needed.
So, in 1890, Ursinsus's founder and first President, John Henry Augustus Bomberger, approached Philadelphia philanthropist and previous Ursinus benefactor Robert Patterson. Bomberger hoped Patterson would give the estimated total cost of $50,000.00 for the building, but of course fund-raising, then as now, is never so easy. Patterson promised half if the college could raise the other half from other donors. The Board of Directors got to work. When President Bomberger died two months later, they promptly resolved to name the proposed building after him. The portraits of Bomberger, the guiding light behind Ursinus from the beginning, and Robert Patterson, the college's "best friend," have long hung in the building's chapel/auditorium. 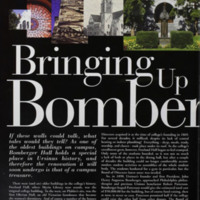 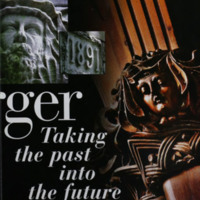