Article explains the funding and renovations occurring in Bomberger in relation to the addition of a College Union.

A million dollars' worth of face-lifting has begun on campus. to convert the Memorial Library into a College Union and to restore the eldest building to more efficient service.
Bomberger Hall, built in 1891 with distinctive Romanesque architecture, will cost $600,0000 in major renovations. The building presently houses the College Chapel, music, political science, economics, anthropology and sociology departments, and offers space to several student organizations.
The main chapel will be restored to its 19th century appearance. A small mediation chapel will be developed in two former classrooms behind the large chapel, to serve as the religious center on campus for all faiths. The small chapel can be divided into two sections, one for worship, and the other for counseling or group discussions.
A student recreation area in the basement will be refurbished along with men's and women's day study areas. Faculty offices and classrooms in the entire building will be modernized.
The project is supported in part by gifts from the Pennsylvania Southeast Conference of the United Church of Christ, which has donated more than $200,000 to date.
The College Union will provide a space for student government and organization offices in the former Alumni Memorial Library building.
The old reading rooms will become social lounges, and the old stack areas will become a snack shop. The basement will become a recreational area, with space for ping-pong, shuffleboard, card-playing and billiards.
Meeting rooms and a music listening room will also be built into the College Union renovations, slated to cost $400,000.
The old library was vacated in fall, 1970, when the new Myrin Library was completed. Renovations toward a College Union center was delayed many times as architectural drawings were revised to stay within a realistic budget. During May the Kresge Foundation donated a $100,000 gift to the College for the project, and an additional $200,000 was earmarked from the capital drive that had begun in 1970. A special appeal will be made to recent graduates to help complete the project, since these people are most aware of the need for the College Union.
The program of the College Union will be directed by Dr. Herman Wessel, who this summer retired as chairman of the Education Department and Director of Placement of the College. A governing board of students, faculty, administration, and alumni will concern themselves with College Union affairs. Dean Ruth Harris, Director of Student Activities, will assist Dr. Wessel and a student program board in planning social events throughout the College year.
When the College Union opens, its operations and program will be financed by a $25 College Union fee to all students.
The College Union project is scheduled for completion by the beginning of 1973, with the Bomberger Hall project to be finished by June. 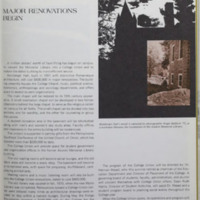