An article from an interview with Miss marion Spangler, the granddaughter of Dr. Bomberger, founder and first President of Ursinus College. It details her connections to the place, including her memories and a short and slight biography of her own life up until 1968.

Memories vivid for granddaughter of founder J.H.A. Bomberger
“I remember my grandfather’s long white beard, even though I was only eight when he died in 1890. It impressed me very much.”
When Miss Marion Spangler, ‘03 [class of 1903], reminisces about her childhood it has a special significance for those interested in Ursinus. Her grandfather was Dr. John H.A. Bomberger, founder and first president of the College. And she herself has had a life-long association with Ursinus, both in personal terms and in her capacity as a dedicated teacher of music.
It was against this rich Ursinus background that the 1968 Annual Alumni Award was presented to Miss Spangler on Alumni day June 1.
Not all of Miss Spangler’s memories of her noted grandfather are as vivid as her memory of his long white beard. “I do remember that his study was the room in the preceptress’s living room of what is now Shreiner Hall for girls. I remember his taking me on his knee in that room and showing me the flat little throat lozenges used by smokers. He was a great pipe smoker.”
“My grandfather was pastor at St. Luke’s Reformed Church in Trappe, and so was my father- that is why I remain a member there, out of loyalty to them. I wish I could recall my grandfather’s voice in the pulpit, but I can’t honestly say I do.”
One of the most poignant mementoes of Dr. Bomberger for Miss Spangler came to light just a few months ago when she was leafing through some family belongings. It was a postcard from Heidelberg, Germany, dated August 1, 1884, addressed to, “My Dear Wee Marion,” who was all of two years old.
“That summer,” said Miss Spangler, “After fifteen struggling years to keep the new College alive, Dr. Bomberger was appointed a delegate to a church conference at Belfast, Ireland. What impelled him to go on the Continent unless it was a powerful urge to seek the scene of influence prevalent at Heidelberg and this rekindle his own flame of College leadership?”
Over a now-fading drawing of the castle and town of Heidelberg, Dr. Bomberger wrote the following message which was not read by its recipient until after a lapse of 85 years: “Grandpa wants to write a little letter to you too, though you will hardly know even what it means. But I hope you will live to know, and then after a long time you will be glad to look at this card and read it, and to think that I had you in mind and heart far off here, and wrote and sent this to you from the place of which the above is a small but very good picture. The Lord bless you, and spare you to do much good in the world. Your affectionate Grandpa, J.H.A. Bomberger.”
To visit Miss Spangler in Studio Cottage on the east end of campus is literally to step into local history. Miss Spangler’s home was originally a Perkiomen boat house, and looked far different than it does today. After Miss Spangler’s father, The Rev. Henry T. Spangler, retired as third President of Ursinus College in 1904, and moved to Philadelphia, the house was used as a family summer home in the country. For many years the large music studio built into the cottage has been the focal point of the musical life Miss Spangler has woven around herself and her many friends, students and fellow artists.
That musical life had its beginnings on Ursinus campus at the turn of the century when Miss Spangler was an undergraduate and her father occupied the Presidency.
“The College was small and more isolated than it is today-the old Perkiomen Railroad was your one way of getting into Philadelphia. So the College of necessity provided its own entertainment and pastimes.”


The forbidden forest
In addition to music recitals, Miss Spangler and her fellow students looked to the two rival literary societies for diversion-the Schaff Literary Society and the Zwingli Literary Society. They held weekly meetings that became social affairs, and put on annual open houses.
“And then my father introduced monthly receptions at Olevian Hall. They were very formal affairs with a receiving line. There was a great objection amongst many of us students, but we realized later that they did something for us in the social graces.”
Many of Miss Spangler’s memories of Ursinus have a tie with the places on and near campus.
Prospect Terrace, for instance, is seldom mentioned in personal histories of the College. But Prospect Terrace was the fashionable watering place of the wealthy Drew family which stood where Alumni Memorial Library now stands. And for Miss Spangler, it is a vivid memory. Her home, Studio Cottage, is on part of the property that made up Prospect Terrace.
“It was like the forbidden forest when I was little. Nobody ever stepped into the grounds east of Bomberger Hall. The building burned down in 1897, before Studio Cottage was there.”
The memory of Dr. Bomberger in his study at Shreiner leads her to think of her own residence in the same building. “Dr. Bomberger built what is now Shreiner and named it Zwingli Hof. He lived in it himself and willed it to the College for use by the President. Our family moved in when my father became President in 1893. Bit the name Zwingli Hof never became familiar, and no presidents lived in the house after that.”
“Since early childhood, my home has been in five houses still standing on the east, west, and south edge of campus….I saw Bomberger Hall rise from a baseball field on the east campus...and now I am to see grand old Freeland Hall disappear for a more adequate library.”
Miss Spangler studied piano and music in Philadelphia, New York, and Berlin following her graduation from Ursinus. Her year in Berlin in 1913-14 was terminated abruptly with the outbreak of hostilities. Her voice teacher there, a man named Lowe, combined a knowledge of Italian opera with that of German Lieder- a combination not very common then. Lowe was a personal friend of Brahms (“who would chide him for wanting to conduct opera”). So Miss Spangler attributes her mastery of German Lieder to the fact that she learned them by “direct transmission.”
Her musical career took three parallel tracks-those of Octave Club leader, director of music and choir at Washington memorial Chapel in Valley Forge, and teacher.
The Octave Club of Norristown was founded by Miss Spangler in 1916, and it still flourishes today under her influence with some 250 members. It began when Miss Spangler invited a group of Norristown women to a lecture recital on old English songs. For about 30 of the Club’s 52 years, Miss Spangler directed the Club’s chorus and continues to direct the “Madrigal Singers.”


Europe revisited
Miss Spangler was music director and choirmaster at Valley Forge’s Washington Memorial Chapel from 1919-1954. In those years she saw members of her boys’ choir grow into manhood and join the adult group also under her direction.
As a teacher of music, Miss Spangler has been associated with Ursinus off and on throughout her career. She taught at Agnes Scott College for Girls in Decatur, Georgia in 1908-10; at Harcourt Place School in Gambier, Ohio, in 1911-13; and at Haverford Boys School, 1930-39.
Meanwhile, her own musical training continued. After her year in Berlin in 1913-14, she attended what is now Juilliard School of Music and studied music theory at Curtis Institute shortly after it opened in the 1920s.
Miss Spangler re-visited Europe in 1958, although she did not see again the Berlin she enjoyed as a young voice student. Her ‘58 trip, however, was as musically oriented as her previous european trip, for it was a round of visits to music festivals both on the Continent and in Great Britain.
One of the high points of that trip of 10 years ago was the 231st Festival of the three Choirs of Worcester, Gloucester, and Hereford Cathedrals. In a record of her trip she wrote, “With a program for the week of a dozen oratorios, old and new, the Norman arches of ancient Hereford Cathedral resounded with such singing as only English choirs of several hundred voices can produce. Supported by the London Symphony Orchestra the harmonies rose and reverberated. When concluded with the thousand listeners joining in the singing, the emotions of heart and mind added overwhelming conviction to the hymn, ‘God moves in mysterious way.’”
Commenting on modern music in an interview with the Philadelphia Inquirer on March 24 of this year [1968], Miss Spangler said, “I’m not terribly enamored of it, I’ll admit. I like the classical composers best. I don’t like the modern dissonance; however I do listen to it. Modern music may develop into something worthwhile within the next century, so it’s futile to say there’s nothing to it. You can’t tell. Even Beethoven was decried in his time.”


Dr. Super’s flute
Miss Spangler is particularly troubled by the effect of popular music on the singing voices of young people. “I think it distorts their real voices and destroys the purity of the vocal line. This destroys art.”
Despite her quick recall of the names, faces and events of many years ago, it becomes evident in a discussion with Miss Spangler that these are less essential in her life than the musical experiences she has shared with scores of people through the years.
The sound of Theodore Paxton (Nelson Eddy’s long-time accompanist) at the organ...the turn of the phrase of Lili Lehmann delivering German lieder in Berlin…. The way Dr. Super, the College’s second president, played the flute … Beethoven’s Fidelio in Salzburg … Conducting Gounod’s Redemption at the Ursinus commencement in 1923 … Such are the events around which Miss Spangler articulates the memories of a life which has been perhaps mild on the outside but intensely fulfilling and exciting within. 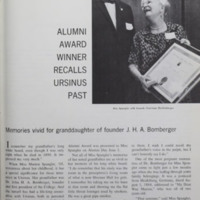 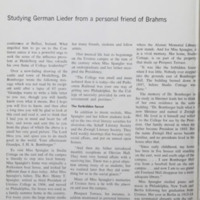 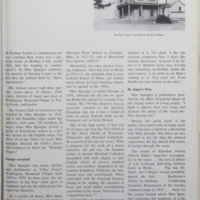