Grizzly coverage of, and campus reactions to, GALA.

Michael Cyr addresses and refutes critiques and coverage of GALA.

In the October 22, 1991 edition of the Grizzly, a "news" article was written by a staff reporter to describe the formation of GALA. Unfortuantely, since no one in the GALA was approached about this article (not even our very accessible advisor, Dr. Oboler) there are several incorrect statements about GALA, which we would like to clarify here.
The question which seems to have roused the most controversy on campus is our desire to remain confidential. Despite what last week's article said, GALA does not wish for its members to be removed from the Student Directory. The concerns of GALA is the list of names, addresses, and telephone numbers of GALA officers in the 'Clubs and Organizatioins' sections of the Student Directory or Student Handbook. Obviously, the reason for this is clear. GALA members do not deserve even one crank phone call. One SAC member felt that GALA had a poor opinion of the entire student body. We feel we have an accurate opinion of some of the student body. It would only take one homophobic student to create serious problems for a member if he or she decided to.
How then would potential members reach GALA? Through our advisor, Dr. Regina Oboler, Sociology (x2319). But then GALA decided that perhaps channeling all students through one professor was too much. So, we asked if there were other faculty members willing to work with GALA. The response has been fantastic. We hope to have at least one professor in each department, so a student can approach whomever they are comfortable with.
Of course, if a student knows a member he or she can always approach GALA directly. Even if this is the case however, he or she may not want to approach that person. Our first (and not last) student to contact GALA felt that if anyone saw him with the GALA President, his homosexuality would "become obvious, everyone would know." Is our promise of confidentiality superfluous? Not to this student.
How can GALA promote "Coming Out" and still seek confidentiality for its members? The answer to this question is obvious to anyone who is familiar with the long and difficult process of "coming out." Coming out is not simply announcing to everyone you know that you are gay. "Coming Out" is a series of steps, during which you tell friends, teachers, parents, strangers; and during which you learn about the "gay community." But first, you must finally decide to come out to yourself. This is often the most difficult step. We encourage students who are somewhere in this process to join GALA. At the very least, GALA provides students with a friendly and accepting ear, guranteed. Should these students deny themselves a friend, merely because they have no discrete way to approach GALA? Absolutely not!
Many people have asked, "isn't GALA being paranoid?" We GALA members who have been "out" on campus do not think so. Have you ever heard someone scream "FAG" at you each day in Wismer? Have you had "no more homos" written on your door? have you lived in a house where fourteen people shared one bathroom because they were afraid to use the one you used? GALA members have. We want to spare all gay students from this behavior, but at the same time offer an outlet through which they can grow as much as any "straight" student. On October 11th, someone scribbled on a GALA flier, "FAGS GO HOME!" What this individual forgot was: this is our home. And we are not going anywhere.
GALA is committed to raising the consciousness of this campus, in order to end occurrences like those listed above. Often we have heard, "But if you choose to come out, then you have to expect the abuse." Expect, yes; accept, never. Expecting gays and lesbians to hide themselves to avoid abuse is no better than telling Blacks to move to Africa to avoid racism. GALA would like acceptance, or at least tolerance, from the student body. We invite everyone in the "Ursinus community" to actively discourage homophobia wherever it occurs.
Still others worry, "How can GALA sponsor events open to the whole campus?" Obviously, any speakers or workshops run by GALA would be open to the entire campus. In situations where gay students would be needed to speak, GALAs and GLSUs at other campus have already volunteered to help if our own numbers are inadequate. Other events, like going to a dance at the Penn GLSU, would be open to anyone who wishes to attend. Obviously this activity would not appeal to all students. But the purpose of any campus group is not to run events which appeal to all students, only to those who have an interest. This applies to the MSU, IV, Meistersingers, Phi Psi, the football team, the Pre-legal club, and every other group on campus.
GALA hopes that this article has answered a few questions and cleared up most confusion regarding our goals and our charter. As usual, we encourage any students who consider themselves gay or bisexual to approach GALA. Any students, faculty, or staff who wish to join GALA are also welcome to become involved. And we thank all of those people who have already stood up for GALA; we can't do it without you! 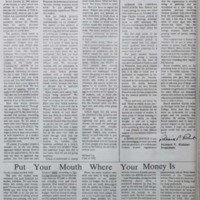