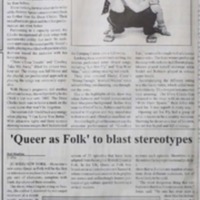 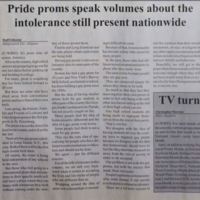 It may come as quite a surprise that the debates about GALA and sexuality that flooded The Grizzly in the autumn of 1995 were something of a rarity in the decade of 1991-2000.  If one visits the Ursinusiana archives (include link) and turns the pages of the original copy of the 1995 newspaper, however, they will find that the debates close with the end of the fall semester. By the spring of 1996, the topic is dropped from The Grizzly’s gray pages. Discussions of sports and campus-wide events continue, but no further reference is made to GALA.

One must page through five years of articles before discussions of GALA and sexuality appear again. On December 7th, 2000, a television review titled “ ‘Queer as Folk’ Blasts Stereotypes’” appears in the newspaper [1]. The article discusses Showtime’s sitcom “Queer as Folk,” which first aired in the United States in December, 2000. Author Rob Morlino cites the television show as the “first” to “explore the lives of an all-gay cast of characters, complete with frank depictions of their sexuality” [1]. In 2001, shortly after the publication of Morlino’s article, an opinion piece discusses the growing popularity of Pride Proms as an alternative to the heterosexist culture promoted by mainstream high school dances [1]. At first, the articles contrast with the heated debates from the fall of 1995. While the debates in the fall of 1995 responded to conflict insular within the Ursinus community, the opinion articles from the New Millennium discuss LGBTQ+ identities in a larger cultural context. Although homophobia and heterosexism was not and is not eradicated at Ursinus, the subtle shift in perspective perhaps indicates a growing acceptance.