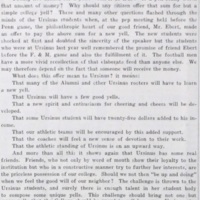 This is a project that focuses on the history of Ursinus College during the 1920s and the early 1930s; aimed at showing how the student body reacted and responded to the sudden shift from the exuberence and wealth that defined the Roaring Twenties to the extreme poverty and immense misery that came to define the Great Depression.

Our project's name pays homage to Irving Berlin's 1926 hit song "Blue Skies," which became symbolic of the jubilance, optimism, and care free nature of the 1920s. Our title, "No More Blue Skies," hints at the irony of the world depicted in the song, for everything it  would come crashing down only three years after the song's release in 1926 with the Stock Market Crash of 1929.

The focus of our project has been divided into three parts that extened to both the 1920s and the 1930s:

2) The political identity of the student body

3) The financial state of Ursinus

We hope this project will become a catalyst for further study into Urinus' formative years.

A special shout out to Andy Prock and Caroline Weigel, whose help proved crucial in the development of this project.

This was a project for Bears Make History, completed in 2017.