The organ was dedicated on the Saturday past with famous musicians in attendance to play the new organ and sing with an organist accompaniment.

CLARK MEMORIAL ORGAN DEDICATED
Mrs. Clark's Magnificent Gift Officially Dedicated on Saturday
With the College Chapel filled to overflowing, amid solemn prayers, fitting speeches and thrilling strains of music from both throat and pipes, the new five thousand dollar pipe organ was officially dedicated to the memory of the man whose bequest made possible this addition to our college, Mr. Charles Heber Clark, journalist and author.
The exercises were opened by a selection on the organ, "Festal Prelude in C", by Ralph Kinder, one of Philadelphia's most distinguished organists. President George Leslie Omwake then made formal announcement of the gift of the organ from Mrs. Clark, after which Rev. George Handy Wailes, D. D., in a feverent prayer to the Almighty dedicated the instrument to all things highest and of His kingdom. Following this Mrs Henry Hotz, the soloist of the day, sang "With Verdure Clad" in such a sweet yet strong soprano voice as to appeal to the most fastidious lover of vocal music.
An Adress, "Music as an Element of Culture", by Professor Daniel Gregory Mason of Columbia University followed. He said in substance: Due to the development of scientific investigation education during the nineteenth century has tended to become specialized. However, realizing the ultimate futility of this coure, a movement has recently started urging that a liberal education means the development of the passive susceptibilities as well as the active capacities and this better liberates us from our narrow selves. Literature and music are important agencies in this. Literature is detailed and concrete. Music is indefinite and hence important for some of our moods are too "general" to permit of the details of literature.
How can music by studied? The latest tendency is to study music for appreciation rather than for technique.


FAMOUS MUSICIANS THRILL STUDENTS
Mr. Ralph Kinder and Mrs. Henry Hotz Entertain at Organ Recital
As a most fitting climax to one of the greatest days in the history of Ursinus came the organ recital on Saturday. A large and intelligently enthusiastic audience more than filled all the available seats in Bomberger. During the entire evening, those present gave their undivided attention and enthusiastic applause to the highly successful efforts of the artists of the evening, Mr. Ralph Kinder, organist, and Mrs. Henry Hotz, soprano, both of Philadelphia.
The wonderful new Haskell Organ, the memorial to Mr. Clark, seemed to unerringly resound to the skillful and artistic handling of Mr. Kinder as he interpreted each number of the diversified and well chosen program. Through all possible shadings of tone and power, in the use of solo stop and combination, and in the stirring thunder of the great organ, the organist showed himself to be a master artist and carried his audience with him even as he controlled his instrument. Mrs. Hotz, as soloist, completely captivated the audience. 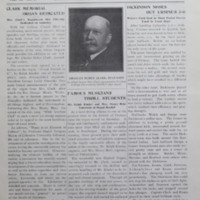 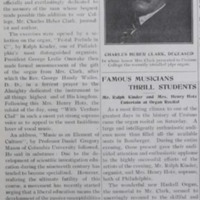