The GALA organization details its start and purpose, with instructions for finding out more information via executive board members of the organization or through a provided list of faculty contacts.

Editor's Note: As of publication, the group mentioned in the following article has not been approved by the Student Activities Committee or by the faculty. Their consitution is currently under review by SAC. This article was submitted to The Grizzly by the GALA organization.

Last week, the newly founded Gay and Lesbian Alliance began its first "visibility campaign" on campus. Letters were sent to all students, to introduce GALA to the student body. Similar letters were also sent to the faculty to elicit their support. And on Friday October 11, over four hundred National Coming Out Day fliers adorned most campus buildings. The message: Gays and Lesbian are a part of this campus, and there are more of us than you think!
The GALA will exist to serve several functions on campus. First, to provide a social outlet for gay, lesbian, or bisexual students. For example, the third Friday of every month, the Gay/Lesbian Student Union at Penn holds dances for the area's large gay student population, which we welcome anyone to attend with us. Second, GALA will locate, attend and perhaps sponsor, events to increase our own self-awareness. Our hope is to educate young gay men and women about the wonderful Gay Culture that exists in the world and to promote a feeling of self-worth and self-acceptance. Third, GALA hopes to act as peer counselors to students who are having difficulty accepting their sexuality.
Lastly, the GALA hopes to heighten awareness on campus, and to combat homophobia. Plans are already underway to bring speakers to campus and run workshops.
For studnets interested in contacting the GALA, we have formed a network of faculty contacts. Interested students can approach any of these contacts, who will pass your name and telephone number on to the Executive Board of GALA. We promise discretion and complete confidentiality. Members names will not appear on lists which are accessible to the public.
FACULTY CONTACTS:
Dr. Hemphill History
Dr. Cameron Spanish
Dr. Rosenthal Math
Mr. Tarrago Spanish
Dr. Lionarons English
Dr. Hall French
Dr. Kelley English
Dr. Schroeder English
Mr. Strunk Comm. Arts
Ms. Van Duren Comm Arts
Dr. Gallagher Anthro/Soc
Dr. Oboler Anthro/Soc
Dr. Bashus Physics
Dr. Moore Politics 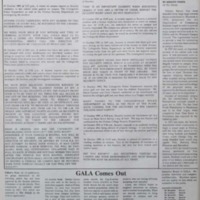