Offers tongue-in-cheek advice for heterosexual males on how to behave around gay males.

I have noticed that many people, especially men, feel awkward around homosexuals. They tend to think that homosexuals, like myself, are a different kind if person, not just someone with a different sexual orientation. Many guys fumble over what to say or how to act when they discover that "that guy over there is gay!" So for all those men having difficulty dealing with gays on a social level, here are some tips I happen to have.
WHEN YOU MEET A GAY MALE: TIPS FOR THE HETEROSEXUAL MALE
Do not run screaming from the room...this is rude.
If you must back away, do so slowly and with discretion.

Do not expect him to be as excited about meeting a hetersexual as you might be about meeting a homosexual...he was probably raised by them.
Do no immediately start talking about your girlfriend or wife in order to make it clear that you are straight...he probably already knows and could care less.
Do not tell him that it is wrong to prefer men and that every man wants to hold and love a smooth sensual woman. These are common fallacies and should be treated as such.
Do not ask him how he got this way...Instead, ask yourself how you got that way.

Do not trivialize his experience by assuming it is a bedroom issue only.
He is gay 24 hours a day.

And women, remember that these same "TIPS" can apply to you. Just change the gender references. 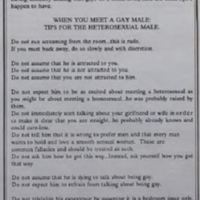