Though I do not wish to engage in an extended acrimonious debate with Dr. Nagy, I would like to set the
record straight on a few points: 1. 1 did not call Or. Nagy a "narrowminded bigot." He rightly points out that since I
have no "psychic insight" into the number of right ways to love he thinks there are, I can 't conclude that he
thinks there is only one-- so I will not draw that conclusion.

2. I said that the biggest thing that causes unhappiness in the lives of gay people is prejudice and discrimination directed at them by bigots. I did not say that this is the only thing that could create unhappiness for a gay person.
People have problems of a variety of sorts, regardless of sexual orientation.

3. Obviously in the United States, gay men are disproportionately afflicted with A.I.D.S., and that is a
tragedy. But why argue that they should change their basic sexual orientation, which essentially cannot be
changed? Argue instead against promiscuity and unsafe sexual practices. Note that in other parts of the world,
A.I.D.S is as prevalent in the heterosexual as the homosexual population.

Note, too, that in the U.S. the category of people least likely to be affected by A.I.D.S is exclusively homosexual women. If A.I.D.S-avoidance is a reason to eschew a particular sexual "Iifestyle," wouldn't all heterosexual
women be better off becoming lesbians?

4. I did not say that "most adult homosexuals
lack the ability to control their behavior." We all have little control over the objects of our sexual desire. I suppose that all of us are capable of controlling sexual behavior and living a celibate " lifestyle." But why? Physical intimacy and giving of mutual pleasure with someone you love is one of life's great joys. Why should it be available only to those deemed sexually correct?

5. I certainly do not agree that adulterers and pedophiles have no ability to control their behavior. And I Consider those acts wrong for reasons other than the nature of the sexual desire involved.

But finally, what is the point of debating whether or not it would be a wise decision for a person to choose
to be gay? That just is not how it works.

Gay people simply are, and have always been with us.
What I am arguing is that no one should be denied civil rights on the basis of sexual orientation. Nor should people be shamed and made to feel "wrong" because of it. 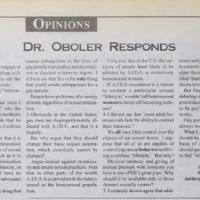