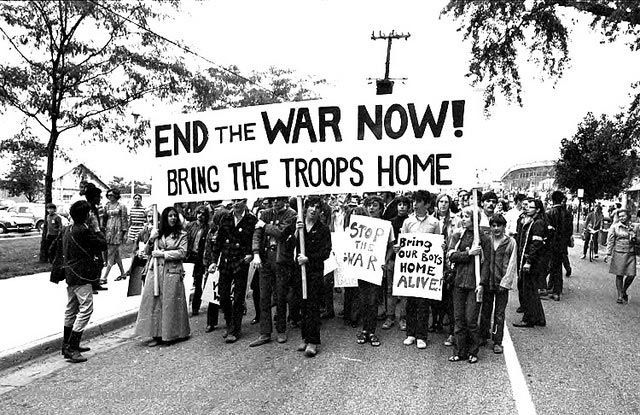 In the years of 1955-1960, the Military tried to build a sense of militaristic pride in the general public by using monetary rewards and tales of glory to make joining the armed forces seem like a noble, logical step for college grads. Nevertheless, there was still a growing contention regarding the war not only domestically but abroad.

While military culture was thriving at the very beginning of the 1960s as a result of the Cold War, it wasn't until around 1963 that the conflict between North and South Vietnam began to permeate our national consciousness. As we crept closer to war with Vietnam, there was no small amount of protest from students and student societies. This backlash was met by a corrective backlash from some educational institutions and other pro-intervention student groups.

In the years from 1966-1970, the government disseminated many prograganda statements regarding the war--that America was winning and that it was the duty of Americans to enlist. Ursinus, in accordance with the general public, reacted against such statements strongly. To Ursinus, the U.S. was not winning in Vietnam. To voice their strong opinions against the war, Ursinus hosted many anti-Vietnam speakers and participated in a nationwide Vietnam War moratorium that occurred amid a backdrop of nationwide protests over Vietnam.

In the years 1971 to 1973, the Ursinus community was focused on getting the soldiers home and what to do once the war officially ended. While there seems to be a consensus throughout the community that the war should end, there was a great deal of contention over what to do once the war was over. The Ursinus Weekly articles feature the community interacting with Vietnam War propaganda to try and navigate how to view the United States, how far to take protests, how to handle returning soldiers and draft dodgers, and who should take responsibility for the war. There appeared to be a great deal of unanswered questions regarding the war.